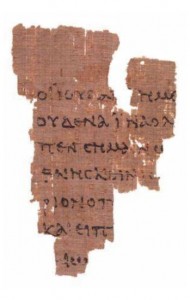 Of crucial interest is the mention of a “beloved disciple” in this highly unique gospel. Since antiquity the author of this gospel, who according to ch. 21 is the Beloved Disciple, has been a matter of some debate. By the late second century Irenaeus made the winning case for John son of Zebedee, apparently against questions raised as to this gospel’s apostolic authorship because of its affinities to and popularity in Gnosticism. John is never mentioned in the fourth gospel, though in the epilogue (Jn 21) the “sons of Zebedee” are mentioned once. Apparently the only thing this identification has going for it is the fact that it never mentions John son of Zebedee by name and that Peter and John are often described together in the other gospels and in Acts, similar to the connection to Peter and the Beloved Disciple in the fourth gospel.

The huge problem with this identification is that John (son of Zebedee), a Galilean fisherman present in the other gospels at key events such as the transfiguration and the agony in the garden, doesn’t mention these events, nor does he mention the bulk of Jesus’ Galilean ministry! The author focuses instead on Jerusalem and its environs. And the author is clearly (at least clear to those who read Greek) not the same as the author of the book of Revelation. And the presence of Peter and John together seems in this gospel to be more of a rivalry than in the other gospels: the Beloved Disciple beats Peter to the tomb, and Peter seems to be hung up on the rumor that the BD would not die in Jn 21. It also seems that there is evidence from Papias, a church father who wrote around AD 100, that John was martyred earlier than the gospel of John was written in the 90s (see discussion in BW3’s post).

There is a person whom Jesus loved mentioned in Jn 11, however: Lazarus, brother of Mary and Martha, resident of Bethany, near Jerusalem. Lazarus is resurrected after having been dead four days as a sign that Jesus is “the resurrection and the life”, and he is explicitly called beloved three times (!) in Jn 11:3, 11, 36.

Identification with Lazarus solves many problems. It explains the focus on Jerusalem and relative ignorance of Galilee as well as the omission of the transfiguration and garden prayer scenes. It also explains why the rumor started that the BD would not die (John 21)—because he had already once been brought back from the dead by Jesus! And the list goes on (see BW3’s post).

What caught my attention about this, besides the fact that I had never encountered it before, was that this is another in the growing list of ideas that were taken for granted by Joseph Smith et al. but that can no longer be in the wake of closer historical analysis. If John is not the BD, and, perhaps more problematic, if the discussion in John 21 was to dispel rumors that the disciple would live until Jesus returned (presumably because the BD had died, which occasioned the writing of John 21), then we must ask whether there is a New Testament basis for the translation of John “the Beloved”. The LDS revelations about such “tarrying” servants seem to be layered on the foundation of John the Beloved, much like the Book of Moses (Joseph Smith’s reworking of the first chapters of Genesis) seems based on long-held traditional assumptions that Moses was author of the Pentateuch, which ample evidence demonstrates he certainly was not. Thus we are once again confronted with how to understand revelation and history; forced to reflect, once again, on the extent to which modern revelation is a category that can be separated from such historical contingencies. I think we have enough examples, such as the relationship between the Joseph Smith papyri and the Book of Abraham, to deal with this in a constructive way, but it might be worth bringing to the surface again and with a fresh set of data.

[1] See earlier entries in the Interpreter’s Dictionary of the Bible on “Beloved Disciple” and “John, Gospel of”, by F.V. Filson and J.N. Sanders, respectively.

[2] What follows is, of course, is not the only proposed solution. Mary Magdalene and John Mark are others.

February 13, 2013
The Evolution of Faith: or is God Creating a Better Mormonism?
Next Post

February 21, 2013 Apologists at War: Religious Studies is Not the Enemy
Recent Comments
0 | Leave a Comment
Browse Our Archives
Related posts from Faith-Promoting Rumor

Latter-day Saint
Review of Mark Smith, Where the Gods Are:...
Faith-Promoting Rumor