Review the Facts: The Brief Against Obama by Hugh Hewitt

Review the Facts: The Brief Against Obama by Hugh Hewitt July 5, 2012 Bill Blankschaen

Hyper-partisan fans of the President won’t like Hugh Hewitt’s latest book The Brief Against Obama: The Rise and Epic Fail of the Hope and Change Presidency, published by Center Street, a division of Hachette Book Group, Inc. But those seeking a candid review of the facts from a seasoned attorney and communicator will find it indispensable for deciding votes this November.

Hugh’s strategy for the book is clear enough. He cites law partner Gary Wolensky to frame the task: “If you promise to show them facts…and you do…you have a good chance of winning. It’s that simple.” (2) Hugh promises to show facts that inexorably make his case through the preponderance of evidence:

The facts of President Obama’s first three-plus years in office are so awful as to compel any fair-minded voter to vote for the Republican nominee. 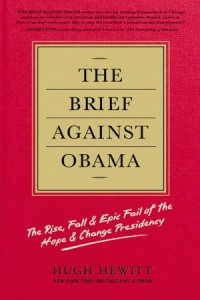 Full of the straight-forward-clarity-without-vitriol that is typical of Hewitt, Hugh’s book delivers on his promise.

Calling on forty-four pages of small-print notes in the back to document the facts, The Brief Against Obama makes the best case yet compiled against President Obama’s re-election bid. It is essential reading for anyone needing ideological ammunition at cook-outs this summer and beside office water-coolers throughout the fall.

Hugh’s first section highlights what he perceives as ten significant domestic policy failures by President Obama starting with “The Nightmare of Obamacare.” That chapter alone is worth the price of the book considering the latest Supreme Court decision. Read it and you’ll understand, even if you disagree on the policy, why electoral anger on this issue will likely determine November headlines.

Hugh minces no words: “Obamacare is a public policy cancer….It is a metastasizing disease that is destroying employment and health care at the same time….” (16) Abundant facts follow.

Facts continue to flow through the rest of the domestic policy chapters along with the usual Hewitt candor:

Hugh punctuates the flow of facts with ample quotations from the President himself in context and with insightful comments from guests to his popular radio show. This colorful image from Rep. Darrell Issa is typical, describing the cooperation Congress has received from the White House on Fast and Furious: “[T]he problem is , Hugh, when we get to discovery, repeatedly it looks like a black cow eating licorice at midnight. They redact everything. We get whole pages that say nothing….” (82)

A thorough treatment of the President’s foreign policy follows with emphasis on what Hugh sees as the key errors:

Chapters on the failed green-energy complex, draconian cuts in military spending, unemployment, attacks on Catholics and the Constitution, the re-emergence of Russia, the naiveté of the Arab Spring – Hugh lays down each like a poker master revealing card after card of what he knows to be the winning hand.

But he warns against overconfidence in a final section citing Obama’s leadership failures: “This will be brutal campaign waged by a desperate and cornered hyper-partisan who will use any means he can, supported by enormous amounts of money. Just imagine how he will act if he, by some stroke of fate, wins a second term.” (194)

If you prefer not to imagine that outcome and facts still matter to you, pick up a copy of the The Brief Against Obama today and reference it often. Better yet, grab two more to share with friends. If Hugh’s right, facts are still stubborn things.

July 3, 2012
How to Celebrate Freedom and End Slavery: The Nomi Network
Next Post

July 10, 2012 While We're Waiting for Life's Traffic to Clear
Recent Comments
7 Comments | Leave a Comment
Browse Our Archives
get the latest from
Evangelical
Sign up for our newsletter
POPULAR AT PATHEOS Evangelical
1 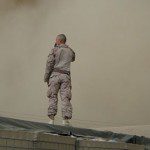