See What Jesus Said about Suffering: “I Told You So!” | Bill Blankschaen
Get newsletters and updates
Close
get the latest from
FaithWalkers
Sign up for our newsletter

See What Jesus Said about Suffering: “I Told You So!” 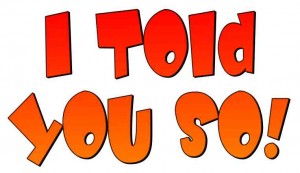 Did you ever come across something Jesus said that, if anyone else had said it, you’d be wondering about the motive behind it? I confess that as I read what he said to the disciples about suffering, it felt a lot like he was callously saying, “I told you so!” In fact, if you had said the same thing to me, I would have expected it to come with an upturned nose and an arrogant snort.

Here’s what He told them:

They will put you out of the synagogues. Indeed, the hour is coming when whoever kills you will think he is offering service to God. And they will do these things because they have not known the Father, nor me. But I have said these things to you, that when their hour comes you may remember that I told them to you. (John 16:2-4 empasis mine)

So, let me get this straight, Lord. Things are going to get pretty rough. We’ll get kicked out of the church. Some will even kill us and think they’re doing you a favor. And all you’ve got to say is remember that I told you it was going to happen? Nice.

Like I said, if it were anyone else talking, I’d assume the worst of their motives.

But it’s Jesus, Son of God. So I can’t go there. But why then does he say “I told you so!” to the disciples?

He knows us all too well

If I were to tell my children to do something challenging, let’s say take some clippers and clear a path through the underbrush in the woods, some would jump at the chance while others would grumble a bit. If I didn’t tell them about the briars that awaited them, I guarantee that all but one or two would quit after the first few pricks in their hands. They would assume that I must not have anticipated it being so difficult. They would assume that if I had known how hard it was going to be to obey, I wouldn’t have told them. Or just not asked them to do it in the first place. They would assume that since it wasn’t easy, something must be wrong.

I don’t think I’m all that different from my kids. Or the disciples for that matter. I think Jesus knew that if He didn’t tell them it was going to be hard — brutally difficult sometimes — to obey, they would have likely dropped out, thinking something was wrong. I know that’s what I think even now when things don’t work out easily.

I’ve embarked on a pretty significant life relocation as I follow God’s call. You can read more about our coming move to Atlanta here. And I confess that if I were following the easy route, I wouldn’t be doing any of it. There have been many times I’ve encountered difficulty and questioned whether or not God knew about it when He asked me to obey.

All too often we enthusiastically start up a path of obedience that we know calls for growth but are surprised by the challenge of the curve. Even though it was just as challenging the last time we went through the curve. Even though we know we shouldn’t be, we’re still shocked by just how difficult it is. All over again.

There’s a common myth that I find especially popular among people of faith. I suppose since we are all at our core people of faith, you’ll find it everywhere. The myth is this:

Sounds good. It’s just not true. Not always. What makes it so believable is that sometimes it’s true. Or seems to be.

Think of what God told Paul after getting his attention on the road to Damascus: “It is hard for you to kick against the goads.” Ouch. Some things are supposed to be difficult in God’s universe. If you travel around killing people and claiming you’re doing it for God, your life is likely to get pretty tough at some point. In other cases, natural consequences await our behaviors. If I try clearing some trees by gnawing at them until they fall, I can expect some discomfort. I’m just guessing on this point, but I think could expect a few difficult visits to the dentist afterwards.

Solomon says, “The way of the lazy man is filled with thorns.”

It’s easy to see why we might think that if life is tough we must be doing something wrong.

But the path of growth is always difficult for a season.

And that gives me great comfort. Maybe it does to you, too.

Have you heard the myth that difficult means wrong? How does knowing that suffering may part of obedience to Christ change your perspective on it? Thanks for leaving a comment so we can all share the growth.

September 20, 2012
The Emancipation Proclamation: Do Two Wrongs Make a Right?
Next Post