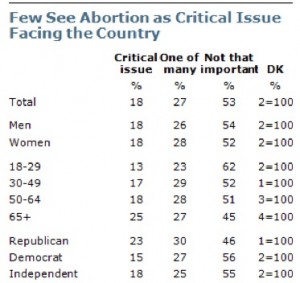 The 40th anniversary of the landmark Supreme Court decision shows a deeply divided — and confused — nation on the issue of abortion.

Sadness. Great sadness is what I feel when thinking about a culture that so flippantly throws away that which it should be protecting to the most exreme measure. Life. It’s difficult to talk about tackling terrorists who are killing handful of Americans while we are killing ourselves by the thousands each day. And then to be woried about brain damage to footbal players — the inconsistency is staggering.

The word inalienable used to mean something. What happens now that it doesn’t? 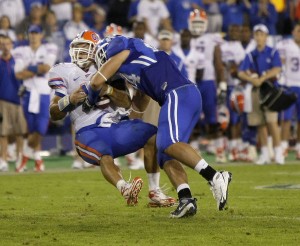 A new study by researchers at UCLA on five living, retired football players reveals a buildup of protiens linked to repetitive head trauma and Alzheimers.

I’m concerned about the media — which can’t be trusted to present much of anything anymore without an agenda — and yet I’ve never been able to understand the desire to ram one’s head into something at full speed. Tackle football, consequently, was never my thing. But I thought we were a pro-choice culture? Should we begin to regulate or outlaw such behavior that might harm those who willingly participate? I see the need for parents to be informed and, perhaps, have their kids take up another less physical sport in order to preserve life — a biblical value if ever there was one.

How harmful are the countles hours spent watching the players acquire the brain damage in the first place? Not to mention the commercials. 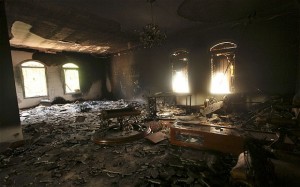 Secretary of State Clinton will finally testify before both House and Senate committees today about the many security failures that led up to the deadly attack in Benghazi, Libya last September 11, more than four months ago.

There are also questions about how the Obama administration responded to the  crisis during the Sept. 11, 2012 attack. Fox News has learned from senior U.S.  defense officials that a FAST team of Marines out of Spain was asked by State  Department officials to change out of their Marine uniforms after being asked to  leave for Libya to help — this required them to deplane and delayed them by  about 90 minutes, according to Pentagon officials.

“This is the result of the Arab Spring,” said the official said, who spoke on condition of anonymity because investigations into the hostage crisis were still under way. “I hope the Americans are conscious of this.”

Now that the election has been won and Obama ran out the clock with help from a willing media, Clinton will give what will likely be useless testimony. Perhas she will even shed a tear. We all know the State security was a failure. Clinton should be held accountable for the failure. She won’t be. She’ll run for President in 2016. The real question remains: What did the President know and when did he know it? Why did he tell the American people and the world that the attack was due to a video that got out of hand when he knew with great certainty that his statement was not true? And why the delays and hesitations to send in troops to rescue the brave Americans who gave their lives, all the while expecting American calvary to arrive at any moment.

Cowardice can be made to look like bravery given enough press conferences and media spin. But dead bodies are stubborn things.

A holy life would not be so rare and difficult a thing if our devotions were not so short and hurried. ~ E. M. Bounds

January 23, 2013 Clinton on Benghazi: "What Difference Would It Make?"
Browse Our Archives
get the latest from
Evangelical
Sign up for our newsletter
POPULAR AT PATHEOS Evangelical
1

What to Do About the Backlash...
Cranach
Related posts from FaithWalkers

Vaccine!
I am thankful.  I heard stories of what the polio vaccine was...
view all Evangelical blogs
Copyright 2008-2020, Patheos. All rights reserved.