Immigration Reform 2.0: I Want to Believe 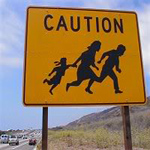 When it comes to immigration reform, I want to believe. I really do.

I want to believe that the latest efforts at immigration reform — call it immigration reform 2.0 — will actually do something to help the 5 million children trapped in limbo within our society. And since we just celebrated School Choice Week last week, we should note that most of them end up in the very worst schools.

I want to believe that our political leaders might actually reach a solution that dismantles the labor underground in which so many are abused.

I want to believe that we might actually reform not just the immigration process but the education process along with it to free those trapped in failing systems.

I want to believe that our leaders will actually reach a solution for immigration reform that respects the rule of law as the foundation for a free society.

But that’s the problem. As much as I want to believe it might actually happen, I just don’t.

Or maybe it’s visions of Senator John McCain insulting conservatives yet again, this time claiming that we have to have amnesty in order to win elections. Uhh, Senator, you kind of tried that pandering in 2007. How’d that work out for you? Oh. I see.

I’ve seen the press conferences, first by the Senators — including rising conservative star Marco Rubio who knows immigration well, having been raised here in the US as a benefactor of it. I saw President Obama’s attempt to speak to the issue a day later. And I’ve heard all the usual promises about border security.

And now we learn that labor leaders and union bosses are meeting to seek a solution — perhaps a new commission will help to regulate the flow of workers. Why am I not encouraged by yet more central planning efforts?

I just don’t believe them.

Bottom line: Read my lips, Washington, I do not believe you. To borrow a phrase from President Clinton,  It’s the integrity, stupid! I supect I am not alone in my concern.

Senators, when you say you will secure the border of our nation, I don’t buy it. Why? Because you’ve said it before, and yet you never have done it. Remember 1986? That deal was supposed to take care of the problem. Yet here we are.

You say you will come up with a plan that has triggers (are we still allowed to say that word?), a commission of border states who will certify that we are making progress securing the border in order for the plan to roll forward. Sounds great. I just don’t believe you.

We’ve had the laws in place for a fence to be built for many years now — and still we wait. We’ve made some progress but nothing like what we could have. I’m not saing the fence is necessarily the best answer. I watched people climbing over it when I was in Mexico while Mexican guards stood by and did nothing. But you said you would build it.

And now we’re closing Border Patrol stations in key areas. So, believing you? Not so much.

Apart from the obvious need to control who comes in and out of our country in these days of terrorist activities, there is a much simpler reason made clear by Milton Friedman. It was he who noted that we cannot have both a welfare state and open borders.

We have, unfortunately, slipped rapidly into becoming a welfare state in which we give benefits and entitlements away to nearly all. If the borders are open, there will be no end of the number of people who arrive to participate. The system will soon collapse under its own weight.

Assumming that those behind the immigration reform measures don’t actually want to collapse the system, the border must be secured for our society to sustain itself. Unless their efforts are simply to secure more votes — but that’s a step into cynicism I hope I don’t have to take.

Those of us who clamor about the rule of law are often accused of being mean-spirited, unkind or uncaring about — wait for it — the children. On the contrary, we recognize that it is the rule of law in this country that protects children and the rest of us from abuse at so many levels. We want children — all children — protected. That’s why we want the rule of law respected. We realize that if the law is ignored in one area, it will soon be ignored in others.

Some claim that it isn’t Christ-like to insist that the law be kept. But I point to Christ himself who said that he did not come to destroy the law but to fill it up to its fullest measure. I point to 1 John where the apostle says that sin is lawnessness. And I point to Romans 13 where Paul claims that love is the keeping of God’s commands. All of them, not just the ones that play better on the evening news.

The fact is that apart from the rule of law, there is no gospel. If there is no law, there is no sin. Of course, there then is no God either from whom morality is derived. As Christ-followers in this immigration reform debate, we must insist not only that compassion be shown for those trapped in a broken system — through both their own mistakes and the failures of our political leaders —  but also that we respect the laws of our land and secure our borders in a meaningful way.

Otherwise, it really won’t matter who comes to this country. Apart from a healthy respect for the laws that protect our values, there will soon be little left worth protecting. The more our national identity slips away, the less urgent border security becomes.

Maybe that’s what some have in mind for this nation, but our leaders are duty-bound to defend us against all enemies. And they can best do just that by ensuring our borders are truly secure and the law is respected as we rightly seek to compassionately resolve the immigration debacle caused by their own negligent leadership.

January 31, 2013
Prayer: How to Get the Greatest Return on Your Investment
Next Post

February 6, 2013 See How to Easily Schedule a Weekend Marriage Retreat
Recent Comments
2 Comments | Leave a Comment
Browse Our Archives
get the latest from
Evangelical
Sign up for our newsletter
POPULAR AT PATHEOS Evangelical
1