I’m always eager to introduce opinions from people who know more than I do about a topic, such as the selection of the new Pope, Francis I. Privileged to feature a guest post from P. Andrew Sandlin, President of The Center for Cultural Leadership.  He founded CCL in 2001 with the conviction that only eminently equipped cultural leaders will actually create a new Christian culture — and that only transformed Christians can transform the present anti-Christian culture of the West. Follow his blog here and posts from all CCL scholars (including myself) on it’s new Twitter feed @CCLLeaders .

You may also enjoy this story with even more background on the new Pope written prior to his selection. HT Hugh Hewitt.

In electing the Argentinean Jorge Mario Bergoglio (Pope Francis), the Roman cardinals signaled that they were not one whit impressed or cowed by modern (read: American and northern European) Catholics. 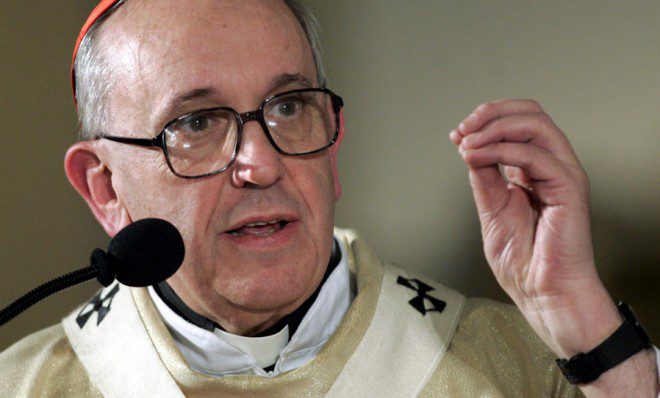 Francis, a philosophical theologian anchored in the conservative wing of the church, is pro-life, anti-homosexual, anti-liberation (i.e., Marxist) theology and reliably conservative on every other hot-button social issue that animates modernist Catholics and their allies in elitist academia and the mainstream press. It is comforting to know that one massive church body (in painful contrast to almost all major Protestant denominations) has the will to stand against the prevailing winds — more like cyclones — of socially apostate modernity.

Away from Squishy Ecumenism

Francis’ conservatism (he is the first Jesuit Pope) also means he is unlikely to be on the vanguard of Catholic-Protestant ecumenism. Traditional Catholics believe — wrongly and presumptuously — that there is ordinarily no salvation outside the Roman communion. But we theologically and culturally conservative (that is to say, Biblical) Protestants are not especially troubled by this intransigence. After all, we were not eager to join Rome in the first place.

Such serious disagreements stand in the way of any thought of either organizational or organic unity (the locus of authority, the appropriation of salvation, the nature of the church) that only squishy lowest-common-denominator religionists on either side of the Catholic-Protestant divide would seriously consider serious ecumenism. We orthodox Protestants have too much respect for Catholics like Francis than to expect them to pretend the differences are bridgeable.

For there to be a huge union, there must be huge changes.  Papering over differences under the guise of Christian charity is a slap in the face to doctrinal orthodoxies on either side.

Toward a Cultural Ecumenism

The squishy ecumenists on both sides will likely find the traditionally sectarian Francis a less than stellar champion.

But we Protestant culture warriors much prefer a sectarian culture warrior to an ecumenical culture wimp. We can live (and have lived for nearly 500 years) with theological sectarianism.

But enduring both theologically and culturally apostate Protestants and Catholics is a burden we are not prepared to bear.

March 13, 2013
Choosing a New Pope: Why the Media Cares about the Next Italian Idol
Next Post

March 15, 2013 5 Steps to More Intentional Living by Faith
Recent Comments
5 Comments | Leave a Comment
"I do like to read the very real experiences of people and human responses and ..."
calvin smit Why I’ve Stopped Singing in Your ..."
"Genesis 35:19-2 (Jacob/Israel set up the monument for Rachel long before the bondage, exodus, Law, ..."
lynlindberg Was Jesus Born Away in a ..."
"My question concerns Jose post from • 7 years agoWhat was the origin of the ..."
lynlindberg Was Jesus Born Away in a ..."
"Interesting conclusion. The context of Micah 4:8 concerns the latter days. The days after the ..."
Crystal Thorne Was Jesus Born Away in a ..."
Browse Our Archives
get the latest from
Evangelical
Sign up for our newsletter
POPULAR AT PATHEOS Evangelical
1