Special Post on “The Leadership Test” for my Equip Leadership friends in Guam April 19, 2013 Bill Blankschaen

Today’s post is intended specifically for my friends in Guam to supplement my opening session on “The Leadership Test.” Often when attending a conference, it can be a challenge to writie it all down if you’re actually paying attention. So I am sharing a few things I plan to reference tonight to make it easy to follow up for further growth. Of course, I welcome communication directly via social media or e-mail: Bill@BillintheBlank.com if I can be of further assistance during my stay on this awesome island.

We begin with en excerpt from my e-book Finding the Curve: The Secret to Explosive Personal Growth, available for free for a limited time here. More links and quotation will follow. I trust regular FaithWalkers readers will indulge this more focused post and, perhaps, be encouraged to download the entire e-book themselves and enjoy it for free this very weekend.

When the Going Gets Tough

Why is it that when the going gets tough the last thing we think about is the growing we could be doing? It’s weird.

It’s like we’re trying to avoid it or something. 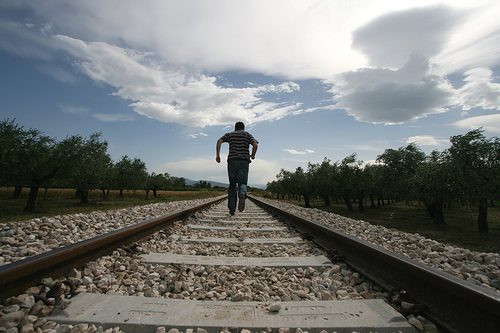 The greatest potential for the most explosive growth is found only in the curve.

People of faith like me may recognize a similar thought from someone much wiser than I:

If you faint in the day of adversity, your strength is small. ~ Solomon [ Tweet this! ]

It would seem pretty obvious. If when the going gets tough, you get going — out of there — then you must not have been that strong in the first place. But the word used by Solomon translated faint is also translated many other places throughout the Bible as “to let go, release, give up, slacken your grip, or pull back.”

So if the going gets tough — like it always does when you enter the curve — and you simply release your grip, let go of your focus, or pull back your effort, your strength is exposed as not being all it should have been.

As not all it could have been.

But then I began to think — always a dangerous activity, to be sure.

What if the opposite is also true in the curve?

If you press forward in the day of adversity, your strength is large. Or better, en-larged.

Because growth always increases my capacity to grow even more.

Is the going tough for you now in the curve? It may be just the thing you need to get growing.

Download the entire fun take on growing your leadership through testing for free with a click here.

Other helpful links I may have mentioned in the Equip Leadership session or that would be helpful to supplement the topic:

I’ll likely add more following our two Saturday sessions or perhaps just make another post entirely. If I can be of further help to ministry leaders during my stay here in Guam, once again, just drop a note to Bill@BillintheBlank.com.

April 17, 2013
Confessions of a Pastor's Wife: What She Really Wants
Next Post

April 21, 2013 New "Mother India" Film Captures Life through the Eyes of the Orphan
Recent Comments
0 | Leave a Comment
Browse Our Archives
get the latest from
Evangelical
Sign up for our newsletter
POPULAR AT PATHEOS Evangelical
1