What Seeing ‘Selma’ Says About You

What Seeing ‘Selma’ Says About You January 9, 2015 Jennifer D. Crumpton

When I moved to New York City 11 years ago, I had to defend my origins. Upon learning I was from Birmingham, Alabama, coworkers, new acquaintances, bartenders would ask me what it was like growing up in a city infamous for its violent racism, for hoses and dogs and Bull Connor, for the bombing of the Sixteenth Street Baptist Church that killed four innocent little girls.

I was often stunned that these people seemed to know more detail about it than I did, as a product of its very school systems and communities. I started to get the feeling that despite being a child of Birmingham, I had straight up not been told everything about its history. Or maybe because I was a child of Birmingham, I had been told a very specific history, a particular story. People I met in my first couple of years in New York, upon hearing my accent, would half-jokingly ask if I was racist. Of course not! I would exclaim with great offense. 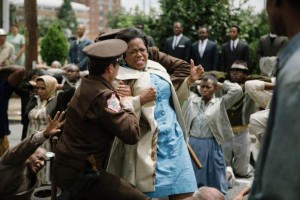 Growing up in a primarily white, Christian, middle-class suburb of Birmingham, my education on the matter was full of silent gaps and excuses, holes and holier-than-thous. At school, at church, at the dinner table, at community groups, there were exactly zero open conversations about our dark history. There was a narrative some people used to nip queries in the bud, to circumvent critical thinking, to avoid being convicted of any sin. When I saw Selma a couple weeks ago, I bawled as the credits rolled, and not just because of David Oyelowo’s Oscar-worthy and astonishingly authentic embodiment of Dr. King. I cried because there is still such a huge denial in the white Christian community at large of our deplorable history of racism, violence, murder and hatred. We point fingers at other races and religions and say they are violent, murderous criminals and conveniently acquit ourselves of some of the most pathetic and despicable displays of corruption, abuse and carnage in the history of humanity.

I grew up just a couple hours from Selma, but I had no real idea of what had really happened there. 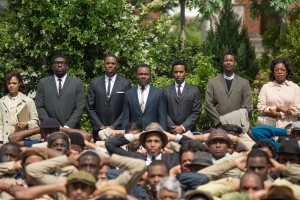 I’ve learned a lot in the last decade. That my black male friends regularly get stopped by police just for walking down the sidewalk and being black, no matter how well they are dressed. That my black female friends get talked down to and dismissed by older white men in their professions no matter how many degrees they have. That when my black friends speak up about something they get attacked in a vicious way that extends beyond ideology differences and is much more visceral and hateful. I’ve seen it happen; I’ve heard it go down.

I learned slowly but surely that there is a whole other side to the story. And I got pissed as hell. I started to consciously review my own entrenched beliefs, I studied as much history as I could get my hands on, I talked in depth to people different from me, and joined inter-racial and inter-religious activism groups and protests in NYC. It took time and effort to learn the real story, to hear others’ stories, to come to believe new stories. It was worth it. I couldn’t believe how I used to think and ignore things, without even knowing it.

It was shocking to be at a dinner table of young, educated New Yorkers a couple years ago and hear a law-enforcement professional say that white men are officially the most discriminated-against group today, and that “lazy” black people got promoted because they were black. Even more shocking was that as the only Southerner (about 9 years removed at the time), I was the only one who said “Excuse me?” I spent an hour trying to convince a group of young, professional white people that we are nowhere near being a post-racist country, reminding them it was not long ago that black people weren’t allowed to be certain places or do things like go to school or vote, that people were brutally killed for being black and got no justice because they were black, and that the benefits we enjoy of our American society were built on their backs as slaves. And that oppression and discrimination were still happening, if perhaps in more subtle ways, today. I talked about the barriers and difficulties so many of my black friends had articulated to me, what I had learned in my three prior years at seminary about the social Gospel and religious justice movements. I was derided and verbally mauled, and became an outcast in that group, who continued to harass me for months until I refused to be around them any more.

One of the main arguments at the table that night was, “Well, my Irish ancestors were hated when they came over” or “Well, I never owned any slaves” or “I’m not racist, and they have all their rights now, so why should I care about black people? I have to work hard too!” Arguments that demonstrated a complete ignorance to the difference between coming to America to struggle to find a better life, or being kidnapped and drug here in chains to be slaves. Arguments that made excuses and refused to acknowledge the realities and stories of others. Self-centered arguments which could not stretch past their own narrow, selfish narratives about their own struggles, identities and stories. 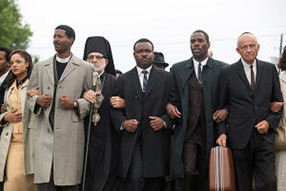 The film directed so beautifully by director Ava DuVernay is the first time the story of Selma has been told on the big screen. Seeing the events play out — many of which I had not been properly educated about — in living color was devastating. Peaceful protestors being bloodied and beaten; nasty racial slurs being screeched and spit; black women being pushed to the ground, stepped on, and hit in the face. I cried because my community of origin had failed me, had failed so many of us who would have wanted to know more, know the truth. I cried because I admitted to myself that much of my life I had spent as an ignorant racist who didn’t think she was racist and who didn’t know anything about the reality of racism. We all have; if you are white and do not consciously struggle daily to truly understand the reality of racism then you must look deeper.

I cried because I now know from my own experience how hard it can be to finally humble oneself, admit we do not know the whole story, and actually listen to other people tell us what we don’t know…and because our country (especially our white citizens) clearly has so far to go, and it all hinges on stubborn, self-centered people waking up and opening up our eyes, ears and minds in a place and time where it is still not demanded of us by our structures, systems and dominant societies.

We see this stubbornness when police turn their backs on Mayor De Blasio for simply saying he understands the sadly tender conversations parents have long had to have with their black children, or for supporting the right of peaceful protest. When police can’t hear the people saying, “we don’t want your policies to cause needless deaths that then inexplicably go unchecked and unpunished, and won’t stand for it” and get that that doesn’t mean we hate police as a whole or do not support them. Our society desperately needs people to listen to one another and not get so childishly defensive, if we really want relations to improve and society to be safer.

We need to realize that actually nothing is black or white: you can criticize unjust and deathly police practices and still appreciate the police and the risks they take every day. You can listen to black people tell their stories and actually believe them and be for them, while not being threatened with your own silly fears of “white suppression and extinction.” You can work for the best for yourself and your family while also fighting for the best for others too, and not lose everything you “think” you have. 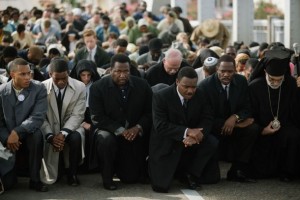 White Christians: please go see Selma this weekend. Listen as if you’ve never heard the story before, watch as if those are your family, and leave believing another side of the story. Wake up tomorrow and help change it completely, for good.

December 12, 2014
3 Lessons for America from Christian Bale's Moses
Next Post

Why American Evangelicalism Was QAnon's Perfect...
Honest to God
Related posts from Femmevangelical