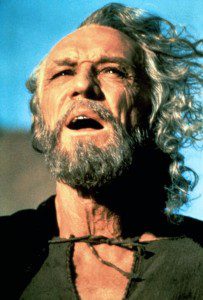 BIBLE MOVIES refer so often to “the God of our fathers” it’s surprising at first to discover just how little attention films have paid to the patriarchs.

There are several reasons for this. Most biblical life stories are made up of disconnected episodes that do not easily conform to the structure of a two- or three-hour film. Attempts to be “historically accurate” with Genesis falter since no one knows when these stories occurred; scholars have dated Abraham to anywhere between the 23rd and 14th centuries BC.

Also, filmmakers face the thorny issue of “interpretation.” The Bible is a book, not a movie script; for it to work on screen, it must be adapted, and therefore modified. Unfortunately, many producers have chosen to “clean up” the Bible by (a) purging it of sex and violence and (b) turning its troubled protagonists into pious heroes that parents can trust.

The Bible Collection, a new series produced for the Turner Broadcasting Network (of all things) and distributed on video by Warner Alliance, commits the latter error but not the former.

According to some scholars, Abraham and Jacob were crafty nomads who played a game of wits with God, while the younger Joseph was a braggart and a snitch whose slavery taught him a lesson in humility. Not so here.

The titular characters in these films are noble souls who speak about God’s guidance even when the biblical record suggests they acted on their own impulses. 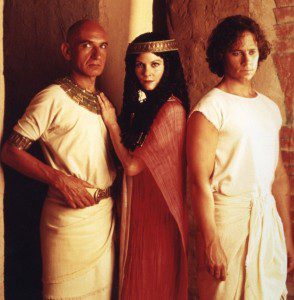 On the other hand, these videos do include most of the racier stuff. Joseph is the most daring video in this regard: the rape of Dinah, the sacking of Shechem, Reuben’s affair with his father’s concubine and Judah’s dalliance with his daughter-in-law Tamar are all present and accounted for. These disparate elements are woven into Joseph’s story without sacrificing the film’s dramatic unity; the result is unexpectedly coherent, even poignant.

Joseph also benefits from the superb performances of Ben Kingsley as Potiphar and Martin Landau as Jacob. Acting in a made-for-TV Bible epic could have been an easy paycheque for either of them, but they invest their roles with intelligence and feeling. Even Strictly Ballroom’s Paul Mercurio does a credible job as Joseph himself. The only embarrassments are Lesley Ann Warren, who makes Potiphar’s wife a shrill, shallow seductress and an exceptionally pretentious Pharaoh.

The other two videos frequently get their history wrong or fail to connect these stories to their original cultural context. Abraham begins admirably with Terah and his Mesopotamian landlord negotiating a “covenant,” but when the time comes for God to establish a covenant of his own with Abraham, the account in Genesis 15 — a weird nighttime ritual involving dismembered animals and a levitating fire pot — is deleted altogether.

God gives Abraham a terse order to circumcise the tribe, but we never see the kinsfolk react to the news, nor the fact that circumcision was already practiced by some surrounding cultures. Abraham tells Isaac and Ishmael that they must sacrifice not the sheep that are worth the most shekels, but the sheep that they love. Families with pets may want their children to skip this part.

The list goes on. The last of Egypt’s pyramids was built centuries before these stories took place, yet here they are treated like an up-and-coming invention. The household gods that Rachel steals were more a symbol of inheritance rights than objects of religious devotion. And, as enlightened as the early Hebrews may have been, they did own slaves. 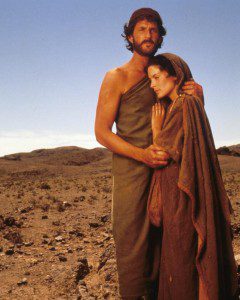 Joseph, however, is about as rich a three-hour epic as one could want from television: complex, challenging and convincing, it has enough emotional power to draw you into its world and enough realism to make you want to stay there.

• Sodom and Gomorrah, 1963. Pious and campy in equal measure, this sword-and-sandals flick has more in common with Planet of the Apes than it does with the Bible.

• The Bible: In the Beginning, 1966. John Huston’s plodding, star-studded epic only gets as far as Genesis 22, but it is worth seeing for Huston’s rib-tickling turn as Noah.

• The Story of Jacob and Joseph, 1974. A brief, necessarily shallow treatment of Genesis’s latter half.

• The Genesis Project, 1979. Like its partner the Jesus video, this multi-volume “translation” of Genesis is high on biblical accuracy but short on drama.

• The Emigrant, 1994. Thanks to a Semitic cast and an emphasis on local agriculture, this Egyptian adaptation of Joseph’s story feels unusually authentic.

— A version of this review first appeared in BC Christian News.

September 1, 1996 Hollywood may be unfair, but look at big picture
Recent Comments
0 | Leave a Comment
"Animation would uniquely allow the creator to show the genitalia without getting into the waters ..."
Kellen The naked Christ in film: birth, ..."
"Gentlepersons:While I am a lifelong Christ-follower and served as Chaplain to a graduate program in ..."
Darrell A. Harris Exclusive: Patrick and Paul Aiello on ..."
"I know this is from 5 years ago, but I just got around to seeing ..."
digital bookworm Exclusive: Watch the trailer for Becoming ..."
"Thanks so much for making this list. I was thinking of doing something similar, but ..."
Bill Kudrle The Chosen — season one scripture ..."
Browse Our Archives
Related posts from FilmChat