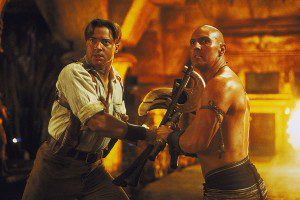 The Mummy, a tongue-in-cheek, late-1990s remake of a 1930s classic, wasn’t a great movie, but it was a fun movie. More of a comedy than a horror story or even an action flick, it overcame the conventions of its genre by treating them all as one big joke, and no one had more fun with this than Brendan Fraser. As Rick O’Connell, a brawny but not so brainy legionnaire who battles bugs and monsters after some amateur archaeologists unwittingly bring an old Egyptian priest back to life, Fraser made ugly faces at the monsters that tried to scare him while providing deadpan commentary on the otherworldly forces surrounding him. The first time Rick shoots the walking corpse, he responds to the panic of a man more in touch with the supernatural than he by putting on a cocky smile and saying, “It’s okay, we got him.” The Mummy was an enjoyable film because the characters were in over their heads and didn’t have a clue.

That daft innocence is missing from The Mummy Returns, a sequel that brings back nearly everyone involved with the first film while also introducing several others to the party. Stephen Sommers, who wrote and directed both films, throws everything he can at the screen in a furious bid to make this the popcorn movie to beat this summer, but the characters all know each other — and the situations they find themselves in — too well. The story takes place 10 years after the first film, by which point Rick has married Evelyn (Rachel Weisz), the librarian who hired him in the first place, and moved to England, where they live with their son, Alex (Freddie Boath). The family still goes to Egypt once in a while, though, and on their latest trip, they find a chest with a 5,000-year-old bracelet that once belonged to the Scorpion King, an ancient warrior who commanded a supernatural army and worked out of a secret oasis hidden in the desert. Legend has it that all who have looked for the Scorpion King’s oasis have disappeared without a trace, but if anyone were to find it and defeat the Scorpion King, they could command his army and take over the world. And, of course, this bracelet is the key that can solve all these mysteries. When Evelyn tries to tell this story to Rick, he finishes her sentences; he’s never heard of the Scorpion King before, but the legend follows a familiar pattern. Later, when Rick himself passes the story on, his cowardly brother-in-law Jonathan (John Hannah) replies, sounding almost bored, “Oh, the old wipe-out-the-world ploy.”

So how does a movie overcome a case of the been-there-done-thats? By throwing lots more of the same-old-same-old at its audience, that’s how. The Mummy Returns is jam-packed with fight scenes and special effects, and while some of them are reasonably good, others are awfully cheesy, especially for a major studio blockbuster like this film aspires to be. The revived but half-rotted corpse of Imhotep (Arnold Vosloo), brought to life again by villains who plan to use him against the Scorpion King, is more convincing this time than it was in the last film, but some of the other digital effects are downright sloppy. The acting is all over the map, too, from Fraser’s reliable straight-man routine to Patricia Velasquez’s clumsy performance as Imhotep’s reincarnated lover.

Fans of Dwayne “The Rock” Johnson might be particularly disappointed that there is so little of him in the film. The wrestling champ makes his acting debut as the Scorpion King, playing him with a smirk and a scowl, and not much else, in a prologue that has no dialogue and is narrated by someone else. When the Scorpion King appears again at the end of the film to go mano a mano with our hero, he turns out to be a computer-generated monster, half-man and half-beast. Fans will just have to wait for The Scorpion King, yet another movie in this series, which will come out later this year. That’s right, the remake begat a sequel, and now the sequel is begetting a spin-off. Like the mummy itself, this franchise refuses to stay dead.

Entertainment
Box office: Moana sails to the top of...
FilmChat