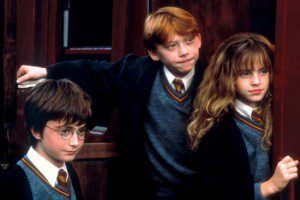 If there is one thing the movie adaptation of Harry Potter and the Philosopher’s Stone may prove, it’s that fidelity to the original text isn’t everything it’s cracked up to be. For over a year, director Chris Columbus has assured followers of the young orphan wizard that he intends to stay as true to J.K. Rowling’s phenomenally popular novels as possible — he has repeated this mantra so often he probably says it in his sleep — and to be sure, his film gets many things right. But, with the help of screenwriter Steve Kloves, Columbus tries to cram so many of the book’s subplots into the film that you are constantly aware of how much of Rowling’s original story is missing. This may be heresy to Potter fans, but films and books are very different media, and a more thorough rewrite could have made this a better movie.

But first, the good news. Apart from the special effects, which are so extravagant that only a Hollywood studio could have afforded them, this is a thoroughly British production, full of many vivid details that capture the sometimes medieval, sometimes Dickensian charm of Rowling’s books. The adult cast is a “Who’s Who” of English thespians, many of whom are perfect in their roles. Robbie Coltrane has a sly, boisterous charisma as the friendly giant Hagrid, John Hurt is slightly foreboding as a seller of magic wands, Maggie Smith affects a delightful Scottish brogue as Professor McGonagall, and Fiona Shaw is a perfect caricature of snobbery as Harry’s Aunt Petunia, who thinks people with magical powers are “freaks.”

But the movie is ultimately about Harry and his classmates, and it is to the credit of the film’s young and mostly inexperienced cast that they give performances every bit as convincing as their adult colleagues. Under Columbus’s direction, Daniel Radcliffe skillfully captures Harry’s joys and insecurities, and the scenes in which he comes into contact with the legacy of his dead parents are truly touching, without tipping into the sappy sentimentality that made some of Columbus’s previous films, like Stepmom, so suffocating. Rupert Grint and Emma Watson, playing Harry’s friends Ron and Hermione, also do well, though they sometimes recite their lines a little too deliberately.

The bad news is that the filmmakers, in their efforts to squeeze the story into the film’s two-and-a-half-hour running time, have left out many of the small character moments that made the book so charming and provided Rowling with many opportunities to flesh out the mystery that takes up the bulk of it. At times, this makes the cameos of famous British actors somewhat distracting; Julie Walters pops up as Ron’s mother, and John Cleese as a ghost named Nearly Headless Nick, but their presence serves no purpose except to take you out of the movie. In other cases, the tendency to whittle the characters away actually undermines the story; we see so little of Professors Snape (Alan Rickman) and Quirrell (Ian Hart) that there is no payoff when the nature of their secretive relationship is finally revealed at the end of the film. And Richard Harris, as Hogwarts headmaster Dumbledore, is too noble, and seems almost stuffy, compared to the enjoyably absurd character in the books.

Rowling herself has said she authorized the movie because she wanted to see a game of Quidditch — a sort of basketball played on flying broomsticks — but the one game we see in the film is a busy blur of computer-generated motion, and doesn’t adequately capture the joy of flight or the thrill of such a fantastic form of competition. The other special effects are a mixed bag. Some are simply beautiful, such as the shimmering wrinkles of Harry’s invisibility cloak and the wall of moving bricks that guards the entrance to Diagon Alley, the wizards’ shopping district. But others are painfully artificial, particularly where living creatures like centaurs and trolls are concerned.

Potter fans can at least take solace in the fact that this is the first film in an ongoing series, so perhaps the filmmakers will refine their future efforts. Then again, each of Rowling’s books has been longer than the last — the fourth, Harry Potter and the Goblet of Fire, is nearly three times as long as The Philosopher’s Stone — and if it proved so difficult to do the first story justice, one wonders how they will cope with the others.

December 1, 2001 Fantasies and fairy tales speak to our spiritual needs
Recent Comments
0 | Leave a Comment
""AD" stands for "Anno Domini", a Latin expression meaning "In the Year of Our Lord".So ..."
Peter T Chattaway The Chosen — season one, episode ..."
"Why does it say at the start of episode 3 that it takes place 26 ..."
Desiree Chamberlain The Chosen — season one, episode ..."
"What about Hellboy, The Grudge, Ghoulies, and Anaconda?"
45th Spiderbob Group VGCP When R-rated franchises go PG-13 …
"Not yet, but I might do something like that once Season 2 is complete."
Peter T Chattaway The Chosen — season one scripture ..."
Browse Our Archives
get the latest from
FilmChat
Sign up for our newsletter
POPULAR AT PATHEOS Entertainment
1