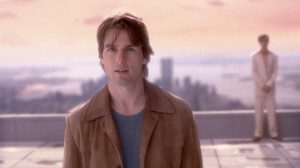 Is life but a dream? Several recent movies have raised that question, and while it’s tempting to write off Vanilla Sky as the latest film to hop on the bandwagon, its roots go back a bit further. Before Waking Life asked whether our day-to-day lives might be just a dream from which we have yet to wake up, and before The Matrix suggested that the world was an illusion fed to our minds by an evil computer network, there was Open Your Eyes, a 1997 film by a young, up-and-coming Spanish director, then in his mid-20s, named Alejandro Amenabar, which explored similar questions about the nature of reality. Tom Cruise evidently saw that film and liked it; he produced Amenabar’s next effort, the late-summer ghost-story sleeper The Others, and he’s now starring in Vanilla Sky, a remake of Open Your Eyes which, despite its inevitably glossier Hollywood style, respects its source material so much that at times it seems like a shot-for-shot replica of the original.

Both films concern a man who has inherited a lucrative family business, and who falls in love with a beautiful woman he meets at his birthday party. In the remake, the man is a 33-year-old magazine publisher named David Aames (Cruise), and in both films, the woman’s name is Sofia and she is played by Penelope Cruz — who, by the way, finally has a part in an English-language film that warrants the sort of hype that was bestowed on her more minor roles in Blow and All the Pretty Horses. David and Sofia hit it off right away, but before they can consummate their relationship, a jealous lover named Julie Gianni (Cameron Diaz) invites David into her car and drives it off a bridge, killing herself and sending him into a coma, from which he awakes with a disfigured face.

The less you know about what comes next in the story, the better, but suffice it to say that the tale unfolds in flashbacks, as David is interrogated by a psychologist (Kurt Russell) while awaiting his trial for murder; at first, we don’t know who David’s alleged victim is, and this bit of mystery is enough to sustain our interest in the story even when it doesn’t seem to be going anywhere. David, who keeps his face hidden behind a mask, also describes his dreams and nightmares, a few of which are quite eerie — especially the one in which he finds himself alone in a deserted Times Square, as though he were the only survivor of an urban biological holocaust. But as David tells his story, the line between reality and nightmares is increasingly blurred, as characters swap identities, total strangers offer him peculiar advice, and he experiences weird, fleeting moments of déjà vu.

Vanilla Sky is written and directed by Cameron Crowe, who previously worked with Cruise on Jerry Maguire, and although he follows Amenabar’s film very closely, Crowe makes the story his own by filling it with humour (much of it courtesy of Jason Lee, who plays David’s best friend Brian) and pop-culture references, including famous artists, classic films, and popular musicians like Bob Dylan, Joan Osborne and the Beatles.

He also slips in a couple of new, minor characters played by British actors Timothy Spall and Tilda Swinton. The resulting film may be Crowe’s most adventurous yet; the punchlines don’t cheapen the drama, the way they did in Almost Famous, and the music, much of which sounds like it is played backwards, augments the film’s time-tripping, mind-bending narrative. But in other ways, this is a rather pedestrian story, and while the conclusion does tie everything together, it might seem a little too hokey. Plus, it’s a little ironic that a film which encourages people to leave their comfort zones and to take great leaps of faith should imitate another artist’s work so closely.

December 1, 2001
Fantasies and fairy tales speak to our spiritual needs
Next Post

December 25, 2001 Review: Kate & Leopold (dir. James Mangold, 2001)
Recent Comments
0 | Leave a Comment
"This was a refreshing read. I'm an average fan of Hellboy but I'm also a ..."
Andrew Mathews Doug Jones on Hellboy and Christianity.
"Great interview! One thing I've wondered since watching Season 1 is why they didn't include ..."
A.J. Cattapan Interview: The Chosen writer-director Dallas Jenkins ..."
"Earth actually does exist in the Dark City universe. Early in the film when John ..."
Edward Clint Dark City and the ambiguous ending.
"I don't always agree with your opinions, but your reviews are never less than interesting ..."
Laura-Lee Rahn The top-grossing Italian movie of 2019: ..."
Browse Our Archives
Follow Us!