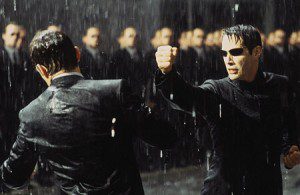 SO MUCH for the salvation of humanity.

When The Matrix first came out four and a half years ago, many Christians were intrigued and excited by the film’s many biblical allusions. The protagonist was a hacker named Neo (Keanu Reeves) who discovered that the entire human race was trapped within a virtual reality, and all people were living in a computer-generated dream state to hide the fact that the world had been conquered by machines that were using human beings as a power source.

Neo, the story went, was the saviour who, it was prophesied, would liberate those trapped in the amniotic pods built by the machines. He fell in love with a woman named Trinity (Carrie-Anne Moss), he was told that all the liberated humans now lived in a place called Zion, he was betrayed by one of his colleagues, and he died and came back to life.

Quite understandably, Christian youth pastors looking for any and all ways to be ‘relevant’ to the kids in their charge latched onto this film and turned it into a ministry tool. Never mind that Neo and his colleagues were also terrorists who freely executed dozens of their fellow humans just because those people had not yet been liberated from ‘the system’ or, if they were past a certain age, would probably never be set free.

Some critics, better versed in the work of philosophers such as Jean Baudrillard — whose ideas were explicitly referenced in that film — argued that writer-directors Andy and Larry Wachowski had put the true message of their film on the lips of Cypher (Joe Pantoliano), the traitor, whose name also means ‘secret message’. Cypher said the machines had already won, and there was no way to escape the world of hollow, meaningless illusions; likewise, said these critics, the film, which casually blended the names and symbols of many religions and mythologies, was actually trying to subvert, not promote, religious belief systems.

To put it another way, these critics argued that the film’s subtle, secret message was that there is no point in fighting the system, since the system is so nihilistic — so void of meaning — that it will gladly absorb the struggle against itself and turn that struggle into just another part of the system. Just look, they said, at how the real-world system, in the form of corporate conglomerates like Time Warner, profits by putting out movies about fighting the system, like The Matrix!

The sequels have, I think, proved these critics right. When the original Matrix came out, I had reservations about the way Neo slaughtered those who needed his salvation; but I was also struck by the fact that the film’s heroes valued the natural world more than the artificial world, despite finding the natural world very unpleasant, because they believed in an even higher, and apparently supernatural, kind of reality.

However, The Matrix Reloaded, released six months ago, revealed that this third level of reality was a fraud; the prophecies were just another system of control imposed on the human race by the machines. And now, The Matrix Revolutions toys with the idea that these machines are just people like the rest of us — an idea already expressed in the video The Animatrax, where we learn that the machines were once persecuted by the bigoted humans who made them — so why can’t we all just get along.

Thus, for example, the third film suggests that computer programs can love just as humans do. Similarly, Neo learns that he and Agent Smith (Hugo Weaving), a computer virus and former program who is now well on his way to possessing all of the Matrix’s inhabitants in a quest for ‘purpose’, are mirror opposites of one another, like yin and yang.

The film’s hollow philosophy comes to the fore when Neo and Smith confront each other one last time within the Matrix. Smith asks Neo what he is fighting for, and declares that concepts like truth, freedom, peace and love are all as illusory and artificial as the Matrix; we cannot escape the Matrix, even if we destroy the machines, because ultimately it resides in our minds. “Why do you persist?” asks Smith. “Because I choose to,” says Neo. And that’s that. There is no transcendence, there is nothing deeper to fight for. There is only choice. The problem is, the previous film already raised all sorts of doubts regarding free will in the first place, suggesting it might be just a matter of biochemical cause and effect.

To be fair, if trivial, the special effects are very good, but the film as a whole is bleak and depressing, except when it’s just laughable, as when one character’s death scene goes on for what seems like forever.

Even the obligatory happy ending feels just wrong. For one thing, this film is so preoccupied with the machines’ invasion of Zion — a tour de force of noisy, violent eye candy, to be sure — that all those people trapped in the pods have been more or less forgotten. (Of course, most of them probably wouldn’t want to leave the comfort of the virtual world for the drab ‘real world’ depicted in these films anyway. Like the Hebrews of Moses’ day, given a choice between a slavery with fleshpots and a desert without them, they might very well take the slavery.)

It is also simply impossible to believe that centuries of mutual hatred and all-out war can stop on a dime the way they supposedly do here. Imagine what the Star Wars trilogy would have been like if Luke Skywalker had killed Darth Vader but left the Emperor in charge, trusting him to be nice to the Rebels, and trusting the Rebels to go along with his plan even though he never shared it with them — that, in a nutshell, is kind of how this story ends.

More to the point, and somewhat curiously, the conclusion to this film also brings to mind the ending of Pleasantville, Gary Ross’s Gnostic parable about a black-and-white sitcom that turns to colour. Like that other film, The Matrix Revolutions is about breaking the cycle of conflict and resolution, whether of the episodic or messianic variety, and becoming content with an open-ended future in which anything can happen.

And like that other film, The Matrix Revolutions ends with a pretty picture of artificial people sitting on a park bench in an artificial world and thinking incredibly optimistic thoughts just because that’s how movies are supposed to end. We in the audience are not supposed to dwell too much on the fact that the situation at the end of each of these films is terribly unstable, and the future for these characters actually looks pretty bleak.

No doubt some Christians will get excited over the cruciform pose that Neo strikes in one of the film’s more climactic moments, or the fact that he and Trinity fly a ship called the Logos, but the film lacks any real substance to support these allusions. The story is over, and nothing has been resolved. What’s more, it is the machines, not the people, who get the last word. And who, four years ago, as a triumphant Neo left threatening voicemail messages for the Matrix and flew up, up and away to the pounding rock beat of Rage Against the Machine, could have predicted that? Pity the youth pastors who must now make sense of all this.

— A version of this review was first published on the BC Christian News website.

January 1, 2004 Mel Gibson still tweaking his death-of-Jesus movie
Recent Comments
0 | Leave a Comment
""AD" stands for "Anno Domini", a Latin expression meaning "In the Year of Our Lord".So ..."
Peter T Chattaway The Chosen — season one, episode ..."
"Why does it say at the start of episode 3 that it takes place 26 ..."
Desiree Chamberlain The Chosen — season one, episode ..."
"What about Hellboy, The Grudge, Ghoulies, and Anaconda?"
45th Spiderbob Group VGCP When R-rated franchises go PG-13 …
"Not yet, but I might do something like that once Season 2 is complete."
Peter T Chattaway The Chosen — season one scripture ..."
Browse Our Archives
get the latest from
FilmChat
Sign up for our newsletter
POPULAR AT PATHEOS Entertainment
1