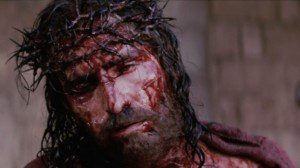 FROM THE extra definite article in the film’s title to the digital re-colouring of actor James Caviezel’s eyes, Mel Gibson is still tweaking The Passion of the Christ, his film about the death of Jesus.

The film, which was originally going to be titled The Passion, was re-named The Passion of Christ a few months ago when it turned out Miramax had already registered ‘The Passion’ for an adaptation of the Jeanette Winterson novel of that name. Gibson has since added an extra “the” to give the film its present title.

Gibson and his movie continue to be dogged by controversy over its allegedly anti-Semitic elements, but he recently showed a rough cut of the film to Billy Graham, who gave it his thumbs-up, and Pope John Paul II, who may or may not have approved of the film, depending on which anonymous Vatican source one believes.

“The film is faithful to the Bible’s teaching that we are all responsible for Jesus’ death, because we all have sinned,” said Graham. For his part, the Pope, according to an anonymous source quoted by the National Catholic Reporter, kept his response to five simple words: “It is as it was.” But in a subsequent story, the Catholic News Service quoted another anonymous source who said the Pope made no such comment.

Jewish response to the film remains mixed. Rabbi A. James Rudin, the American Jewish Committee’s senior advisor on interreligious affairs, has said that Jewish leaders should not boycott the film outright but, rather, should use the film to explain how depictions of Christ’s death have stoked anti-Semitism in the past.

Dennis Prager, who has worked closely with conservative Christians, also expressed reservations. “I cannot say that I am happy this film was made,” he wrote. “Nevertheless, if the vast majority of Christians and Jews of goodwill try hard to understand what film the other is watching, some good can yet result.”

Meanwhile, some Christians have raised concerns about the film’s possible obsession with the graphic details of crucifixion.

Gregg Easterbrook, a Presbyterian, suggested in his online blog at The New Republic that Gibson may be sensationalizing the death of Christ, the same way his other historical films have sensationalized violence.

Frederica Mathewes-Green, who is Orthodox, wrote a Beliefnet column (and a follow-up essay on the history of the atonement on her web site) exploring the possible theological problems that arise from fixating on the wounds of Christ, rather than on his triumph over death.

And Archbishop Stefan Soroka of the Ukrainian Archdiocese of Philadelphia, who has actually seen the film, called it “shallow” in an article for his archdiocesan newspaper. “Frankly, without the hype, this movie will not interest many viewers because it fails to offer hope,” he wrote. “I would not recommend the movie to my friends nor to the faithful — and particularly the young — because the film, while interesting in the way some things are portrayed, particularly evil, lacks content to really engage my interest.”

For their part, the New York Post obtained a bootleg copy of the rough cut and showed it to five people, four of whom — a Catholic priest, a rabbi, a professor of religion, and Post film critic Lou Lumenick — did not care for it in its present form. But even the Baptist layperson who liked the film agreed with the others that it dwelled on the violence too much.

At least we now know how long we’ll have to wait before we can see the film and evaluate it for ourselves. Newmarket, the distributor behind such indie hits as Whale Rider and Memento, plans to release the film in the United States on Ash Wednesday (February 25). The film will also be distributed across Canada that day by Equinoxe, the distributor behind My Big Fat Greek Wedding and Mambo Italiano.

January 1, 2004 2004 Film Journal
Recent Comments
0 | Leave a Comment
"What a strange article. Using movies as your basis to defend that Lazarus was murdered ..."
Mark Ross DeFazio The death, resurrection, and second death ..."
"Another with Ethiopian eunuch and Philip https://archive.org/details..."
Jason McKahan Watch: Philip is the original vanishing ..."
"I found Hanky Panky a pretty cool 80s movie when I first saw it on ..."
UniblabBR Sidney Poitier marathon: Hanky Panky (1982) ..."
"In 1972, yes. The movie was made in 1956 but the ratings system didn't exist ..."
Peter T Chattaway One of the reasons I do ..."
Browse Our Archives
get the latest from
FilmChat
Sign up for our newsletter
POPULAR AT PATHEOS Entertainment
1