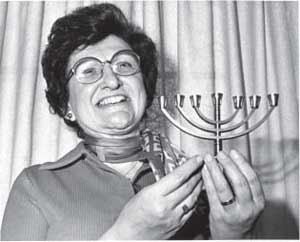 There was much chatter a few months ago about how the Academy had “snubbed” The Passion of the Christ by failing to nominate it in more than three categories (even though two, cinematography and music, are mighty significant from a filmmaking point of view and arguably matter more than the celebrity contests that are the acting awards). Interestingly, pretty much no pundit noted the fact that the Academy also nominated Sister Rose’s Passion, Oren Jacoby’s documentary short about a nun who played a significant part in convincing the higher-ups at Vatican II to formally reject anti-Semitism.

FWIW, I just Google’d “passion snubbed” and checked all the blogs and news sites for the first two pages of results, and not one of them made reference to Jacoby’s film. For my part, on the basis of the documentary’s topic alone, I did make a connection at the time between the Gibson and Jacoby films in my own Oscar column, but purely on the level of Oscar politics.

At the time, I didn’t assume much more than that someone had been making a film about Sr. Rose Thering and gave the film its title to capitalize on the controversy around the alleged anti-Semitism of Gibson’s film. But last night I finally saw Jacoby’s film for myself, at the Vancouver Jewish Film Festival, and I began to notice how a number of the interviewees (Paula Fredriksen, Sr. Mary C. Boys, Fr. John Pawlikowski) had been members of the ad hoc group of scholars that became outspoken critics of Gibson’s film, and then, finally, the last 5-10 minutes of this 38-minute film were all about The Passion itself and how we need to be vigilant lest these old prejudices resurface, etc. So, there appears to be little or nothing coincidental about that link at all.

FWIW, my own mixed feelings about Gibson’s film extend to his presentation of the Jewish characters. I love that he emphasizes the Jewishness of the proto-Christian characters, especially the Virgin Mary and Simon of Cyrene, but I wish he hadn’t been so flagrantly unhistorical and unbiblical as to make Pilate a thoughtful and righteous patsy of Caiaphas’s, and that he hadn’t been so flagrantly unhistorical and unbiblical as to delete Caiaphas‘s realpolitik motivations; and it might have been nice if there had been just one Gamaliel figure, someone who rejects but also tolerates proto-Christianity and who opposes Caiaphas from that angle — and no, the brief moment when the proto-Christians Nicodemus and Joseph of Arimathea protest the actions of the Sanhedrin, a staple in Jesus films, doesn’t quite suffice.

I do not think Gibson himself is anti-Semitic — quite the opposite, in fact — but I do think he is naive, uncritical, anti-scholarly, and prone towards vulgarity and oversimplification, and that these tendencies of his have influenced the way he passes on traditions that have historically been problematic in this area. What’s more, these tendencies of his have rendered him somewhat incoherent in trying to discuss these issues once these criticisms of his source materials are raised in the public arena — and his incoherence, combined with his flip-flopping (he promised to remove an inflammatory subtitle, then put it back in the rough cut, then took it out again), had the effect of appearing like little more than a brazen attempt to stoke the film’s controversy, all for the sake of keeping it in the news and increasing its box-office success.

Unfortunately, Gibson’s critics haven’t helped, thanks to their own tendency to oversimplify — they rarely acknowledge any of the film’s pro-Jewish elements — and alas, Sister Rose’s Passion does reflect that sort of knee-jerk approach. For the first half-hour or so, I actually found the film fairly educational and informative. I grew up in a very pro-Jewish evangelical environment, where we sang Jewish-styled praise songs by the likes of Merv and Merla Watson, and what’s more, my Mennonite ancestors grew up in Russian and Ukrainian villages rather similar to the Jewish village in Fiddler on the Roof, and then of course there were films like Jesus of Nazareth which made a point of pronouncing the Jewish elements in Jesus’ life — so I always felt a certain kinship with Jews on those levels, and if anything, as a boy who memorized biblical geneaologies, I even envied them their blood ties to Christ.

As Martin Luther put it, in one of his better moments, “We should remember that we are but Gentiles, while the Jews are of the lineage of Christ. We are aliens and in-laws; they are blood relatives, cousins, and brothers of our Lord. Therefore, if one is to boast of flesh and blood, the Jews are actually nearer to Christ than we are.” (That was in 1523, when the Reformation was just starting out and Luther was inclined to praise Jews for refusing to join the “dolts and blockheads” of the Catholic church. Twenty years later, bitter that Jews had failed to convert en masse to Protestantism, and with a greater supply of non-Catholics on his side, Luther took a considerably harsher line. But I digress.)

I bring that all up because it is always shocking and startling to me whenever I hear anyone say that it is Christian teaching that “the Jews” killed Christ. This was not the teaching of my upbringing. It is not what I find in the gospels. It violates everything I know historically. And yet, there it is, in Sr. Rose’s research — all those Catholic schoolbooks, and all those radio broadcasts by Fr. Coughlin, and all those other things that spread the worst kinds of ideas about Jewish people in the days before Vatican II.

So, clearly, there has traditionally been a problem in this area in the past — and I hate to admit it, but my awareness of this problem has caused me to wince just a wee bit whenever I hear those ancient hymns in my Orthodox church about how “the Jews” had sealed the tomb while “the soldiers” guarded Jesus’ body. I know, I know, using terms like “the Jews” to describe Jesus’ opponents is a practise that goes all the way back to John’s (very Jewish) gospel at least, and the Orthodox church emphasizes much of Jewish scripture and practice that my evangelical associates tend to ignore, but to be fair, shouldn’t that be either “the Jews” and “the Romans”, or “the priests” and “the soldiers”? (Again, I digress.)

Anyway, like I was saying, clearly there have been problems in this area, and Jacoby’s film probably should have kept its focus on the historical big picture. However, by jumping into the Gibson debate the way it does — and by siding so strongly with one side of that debate — Jacoby’s film risks becoming stuck in time, and it fails to foster a more constructive dialogue around these issues. 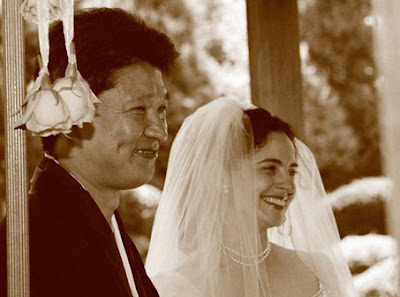 I caught a couple other films while I was at the theatre. Mixed Blessings was an interesting look at interfaith and especially Jewish-Christian couples — correction, families, since interfaith relationships don’t seem to be that big a deal for mere couples but become intensely problematic once the couples have children and must choose a spiritual path within which to raise them. As a cradle Mennonite who has married a convert to Orthodoxy and attends a church where nearly every adult is also a convert to Orthodoxy, I of course find this subject interesting, though I think the gaps between different churches are much less profound than those between different faiths; I don’t think we can say, as one character does in the film, that because our parents were Lutheran and Catholic, it therefore follows that Catholics can marry Jews. If beliefs are going to matter at all — and according to one of the interviewees, beliefs really don’t matter for Jews, though culture and ritual certainly do! — then it seems to me that you do have to ask, at some point, who and what Jesus is. (And the particular person I just cited makes a point of saying that her priest omitted any reference to Jesus in the wedding ceremony, at the request of her mother. It boggles my mind that any “devout” Christian would want to leave Jesus out of the wedding, but there you go.) One man says people should never convert for the sake of their marriage, because one’s relationship with God is more important than one’s relationship with a spouse, but, um, isn’t that exactly why people should marry within their faiths? 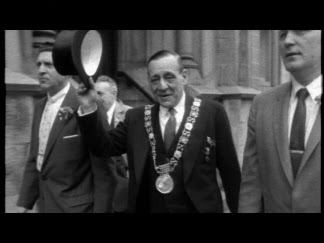 Finally, after all that heavy stuff, there was Shalom Ireland, a bright, sparkly, entertaining documentary about that tiny, shrinking, but hopefully rebounding community of Jews who live in Ireland and have apparently had much success there. The man pictured here is Robert Briscoe, the first Jew elected Lord Mayor of Dublin (yes, there was another — his son!), and apparently it was the first Chief Rabbi of Ireland, Isaac Herzog, who went on to become the first Chief Rabbi of Israel; his son Chaim went on to become President of Israel as well. There are some fascinating anecdotes here, and the soundtrack has a nice kind of Celtic Klezmer feel. My one criticism, perhaps, would be that the film could have benefitted from more interviewees; it felt as though we were getting our stories from a very small group of people. Which, I suppose, may be representative enough!

April 13, 2005 The assassination of Sean Penn
Recent Comments
2 Comments | Leave a Comment
"What a strange article. Using movies as your basis to defend that Lazarus was murdered ..."
Mark Ross DeFazio The death, resurrection, and second death ..."
"Another with Ethiopian eunuch and Philip https://archive.org/details..."
Jason McKahan Watch: Philip is the original vanishing ..."
"I found Hanky Panky a pretty cool 80s movie when I first saw it on ..."
UniblabBR Sidney Poitier marathon: Hanky Panky (1982) ..."
"In 1972, yes. The movie was made in 1956 but the ratings system didn't exist ..."
Peter T Chattaway One of the reasons I do ..."
Browse Our Archives
get the latest from
FilmChat
Sign up for our newsletter
POPULAR AT PATHEOS Entertainment
1