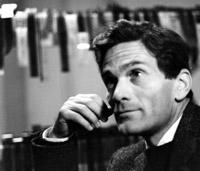 First, there was Part One of La Rabbia (1963), Pasolini’s fourth directorial effort and the first half of a larger film that paired his Marxist take on world events with the right-wing views of another director, Giovanni Guareschi. It’s basically a 50-minute collage of newsreel footage that denounces various atrocities committed by the western world, particularly where Africa is concerned; and if I read his narration correctly (and it’s always hard to tell with poets), Pasolini celebrates the colour-blindness of the future and the burgeoning independence of the African states, so I cannot help but wonder what he would make of, say, the racist policies of old Marxists like Robert Mugabe, if he were around to witness them today. The film also includes plenty of footage of atom-bomb tests, and it covers various major events from Elizabeth II’s coronation and Eisenhower’s nomination at one of the Republican conventions to the deaths of Marilyn Monroe and Pope Pius XII, as well as the first orbital flights of the Soviet cosmonauts.

(FWIW, Pasolini’s third directorial effort, a segment for the 1963 anthology Ro.Go.Pa.G. called La Ricotta, is not part of this series, but it is available on the Mamma Roma DVD. I have not seen it yet, but I probably should, since it concerns a director who sets out to make a film about the death of Jesus.)

Second, there was Seeking Locations in Palestine for The Gospel According to St. Matthew (1964), a sort of diary-on-film in which Pasolini tours the Holy Land — usually in the company of a Catholic priest, Fr. Andrea Carraro — and comes to the realization that he may not be able to make his adaptation of Matthew’s gospel there after all. Since this is a very hard film to come by, I took notes obsessively during this particular screening.

The film opens with a farmer threshing his grain, and Pasolini tells us, “That’s what I sought with great hope, a biblical, archaic world.” At Mt. Tabor, where the Beatitudes were delivered, he says, “I was struck by the poverty and humility of this place,” and soon after, he says of another place, “Capernaum is sublime for its smallness, its bareness, its lack of scenery.” But already he bemoans how the nearby landscape has been “contaminated by modernity … These houses could be seen in Rome or Switzerland.” Fr. Andrea suggests that he should continue with his travels through Palestine, absorbing the spirit of the place, and then feel free to recreate the biblical story in whatever setting seems right to him. Pasolini replies, “I think I have completely transformed my idea of sacred places. Rather than adapt places, I must adapt myself.”

Then it’s off to the Jordan River, for which Pasolini says he feels a “lack of respect,” compared to what he had expected after seeing so many paintings: “Yes, a poor, humble, desperate little stream, as usual.” He muses that the nearby mountains and olive groves are just like similar settings in Italy. He also makes some odd comments about the locals. “The Arab subproletariat is the only class which has remained truly archaic,” in contrast with Israeli modernity, he says, adding that their faces are “pagan, pre-Christian, indifferent, cheerful, animal-like.” The fact that Christianity, as he sees it, has left no trace on the local faces constitutes an “irresolvable” problem for him. Personally, I’m not sure what he’s getting at, since a lot of Arabs in the area were and are Christian, and besides, one could always say the peasants to whom Jesus ministered were, themselves, pre-Christian.

Then Pasolini discovers a kibbutz, and interviews some of the people who live there, clearly fascinated and spellbound by their commitment to collectivist and small-c communist principles.

Back to the landscape. Pasolini recounts how the villages seemed “wretched, pastoral, archaic, fragmented” to him, while Fr. Andrea saw “dignity” in them and speculated the earlier Jewish villages had been “more dignified” than the present “ruin” that was the Arab villages. Then Pasolini films the massive apartment blocks springing up around Nazareth, and he says Israel seems to see-saw between an “excess of misery” like he saw among the Druze, or an “excess of colour” like he can now see in the “skyscrapers of a capitalist city.” He remarks again that the local Bedouin children have “an animal gentleness, absolutely pre-Christian.”

Then it’s off to the Dead Sea, which Pasolini says is the only place he has visited that has the “shape of grandeur”. He remarks that, where Sodom and Gomorrah once stood, there are now industrial plants, and he says “the immensity of this horizon can never be obtained” in Italy, though he thinks the Etna region might work.

Then he and Fr. Andrea come to the fence that divides Israel from Jordan, and one part of Jerusalem from another — remember, this was a few years before the Six-Day War! Pasolini says, “The film’s most interesting parts are in the Jordanian parts of Jerusalem,” and he adds that, just as the fence divides Israel from Jordan, so too it divides the teachings of Jesus from his passion. The triumphal entry, he says, marks the point where the story of Jesus “becomes something more than religious, public and political. … The arrival in Jerusalem will mark a new phase in the film. … At this point, the film must change register and inspiration.”

Fr. Andrea asks Pasolini if their pilgrimage has had any “spiritual” impact on him, and Pasolini replies that this word means something different to the two of them; whereas it has a “religious” meaning for Fr. Andrea, it has more of an “aesthetic” meaning for Pasolini, and he remarks that while he had always believed that the smaller a thing was, the more beautiful and profound it was, he now says, “It’s truer than I thought.” Fr. Andrea replies that St. Paul, who wrote about God choosing the weak and the foolish to shame the strong and the wise, would agree with him.

This sets up an interesting exchange when the two men arrive at the Church of the Holy Sepulchre, and Pasolini, who calls the building a “cultural, architectural monster,” asks, “What do you think of imposing such grandeur on Christ, his humility?” Fr. Andrea replies that the structure reflects the efforts of generations of believers to honour the words of Jesus as they should be honoured. And to be honest, after witnessing exchanges like this one, I found myself wondering what was going through Pasolini’s mind when he filmed those passages in Matthew where Jesus declares that he is greater than Jonah and Solomon; might Pasolini have been pushing the humility angle a little too much?

The film ends with Pasolini contemplating the location of the Ascension, which he describes as “the most sublime moment of the Gospel story, when Christ abandons us to seek him, alone.”

This was then followed by The Gospel According to St. Matthew (1964) itself, which I had never seen on the big screen before, and it was fascinating to see how close the Italian locations came to what Pasolini had filmed in the Holy Land. I have seen this film and written about it several times before, so I won’t say much about it here. But a few things did jump out at me this time.

For one thing, while it is well-known that Mel Gibson made The Passion of the Christ (2004) in the same Italian locations, perhaps as an homage to Pasolini — and hmmm, where would Gibson have made his film if Pasolini had not become so disenchanted with Israel, I wonder? — I found myself wondering if the scene where Judas is driven to suicide in Gibson’s film might, in some perverse way, have been inspired by the scene in Pasolini’s film where Joseph, contemplating the news that Mary is pregnant, wanders to a place where some children are playing, and then falls asleep, and then the children are replaced by an angel. The juxtaposition of laughing children and a supernatural figure in an otherwise barren place is oddly similar, yet where it is inspiring in Pasolini’s film, it is one of the more horrifying moments in Gibson’s film.

For another, I was struck for the first time by the way Jesus’s eyes seem to water when he is informed that his mother and brothers have come to see him, and he sort-of rebuffs them by saying that his followers are his mother and brothers; if this detail is visible on the various video versions I have seen of this film, and it might very well not be, then I evidently missed it or forgot it. I also paid more attention to a few other scenes where he actually sheds a tear, or we see that a tear has already run down his cheek.

I also really like the way the film encourages identification with the Virgin Mary, especially when she is older (and played by Pasolini’s mother) and she sees things in a way that brings back memories of her younger days. For example, just as she once watched Joseph wander off down a certain path from her home, she now watches Jesus and his disciples wander off down that path (and if memory serves, this is one of the scenes in which Jesus, looking over his shoulder, sheds a tear); and then, of course, she is greeted by the same youthful angel at the tomb that greeted her and Joseph during the events of the Nativity so long ago, which brings everything full circle in a way. Plus there is something kind of cool, in a Highlander sort of way, about films in which some characters get old while others stay eternally young!

Anyway, the juxtaposition of Pasolini’s diary-on-film with the film he ended up making is quite fascinating, and they just cry out to be released together on DVD — why hasn’t Criterion done this yet?

UPDATE: Oh, one other thing I noticed this time that I don’t recall noticing so much in previous viewings is the shot of Jesus holding the hand of one of the disciples, probably John, as he and the Twelve are walking about, possibly on their way to Gethsemane. (Sorry, I forget which scene this was, exactly.)

Given that La Rabbia includes shots of burly Russian politicians kissing each other on the mouth, I am well aware that physical displays of affection are not necessarily sexual; however, since Pasolini himself was gay, I do wonder what the sight of men holding hands would have signified to the Italians of his day, and whether he thought this was a common custom in first-century Palestinian Jewish culture. It is also interesting to note that this may be one of a few non-Matthean elements that Pasolini has incorporated into his adaptation of Matthew, since this probably stems from the “beloved disciple” passages in John’s gospel.

June 21, 2005 Newsbites galore!
Recent Comments
1 Comment | Leave a Comment
"I wish I had a lamp I would only need 1 wish not even 3 ..."
Ararara Listen: The audio trailer for Audible’s ..."
"Thats it im going to find the duchess and be a student of her i ..."
Reuben Fourie Noah and Moses reunite for Thor: ..."
"Because of the best comics, I'm dying.... That's great👉🏻👉🏻aO.MARTIALGIPHY.COM/x4647uA"
AsheFall22 Young David animated series coming in ..."
"Sergey is so annoying😑iy.636WB.CO/X4647qe"
fuble Is Terrence Malick’s Jesus movie coming ..."
Browse Our Archives
Related posts from FilmChat