Just a handful of news items. 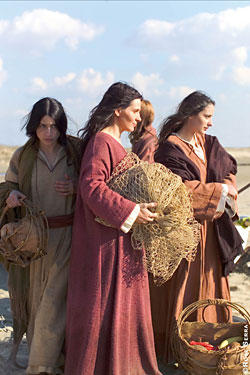 1. And now for the meta-Jesus movies (or should that be Jesus meta-movies?)! IndieWIRE says Abel Ferrara’s Mary, which premieres in Venice and Toronto next month, will also open the San Sebastian Film Festival‘s Zabaltegi section: “The film is a tale of the filming of a movie about the life of Jesus and how it draws the actress (Juliette Binoche) playing the part of Mary Magdalene into a spiritual crisis of profound consequences involving the director of the film, (Matthew Modine) and a New York journalist (Forest Whitaker).” Hmmm, I wonder how it will compare to Pasolini’s La ricotta (1963) or Arcand’s Jesus of Montreal (1989), which admittedly was about a play and not a film, but still…

2. Having finished War of the Worlds, Steven Spielberg is now going to re-make another 1950s disaster movie. FilmStew.com and E! Online report that he has taken over the producing chores on a remake of When Worlds Collide (1951) — a film which, incidentally, inspired one of my favorite Daniel Amos songs, albeit in title only. But wait — didn’t Spielberg pretty much already do this with Deep Impact (1998), which he executive-produced?

3. The Washington Post, Video Business and Studio Briefing all have items up now on the demise of the VHS format. The latest development? Star Wars: Episode III – Revenge of the Sith will be released on DVD only. Ah, brings back memories of how the “director’s cut” of Lawrence of Arabia (1962/1989) was one of the very first major studio films not to be released on Beta.

August 31, 2005 Review: The Constant Gardener (dir. Fernando Meirelles, 2005)
Recent Comments
2 Comments | Leave a Comment
"Gentlepersons:While I am a lifelong Christ-follower and served as Chaplain to a graduate program in ..."
Darrell A. Harris Exclusive: Patrick and Paul Aiello on ..."
"I know this is from 5 years ago, but I just got around to seeing ..."
digital bookworm Exclusive: Watch the trailer for Becoming ..."
"Thanks so much for making this list. I was thinking of doing something similar, but ..."
Bill Kudrle The Chosen — season one scripture ..."
"Per Wikipedia: "In classical rhetoric and logic, begging the question or assuming the conclusion is ..."
Peter T Chattaway Review: The Most Reluctant Convert: The ..."
Browse Our Archives
Related posts from FilmChat

DeVon Franklin Talks New Audiobook 'It Takes a...
Film producer and author DeVon Franklin (“Breakthrough,” “The Star,” “Miracles from Heaven”)...
view all Entertainment blogs
What Are Your Thoughts?leave a comment
Copyright 2008-2021, Patheos. All rights reserved.