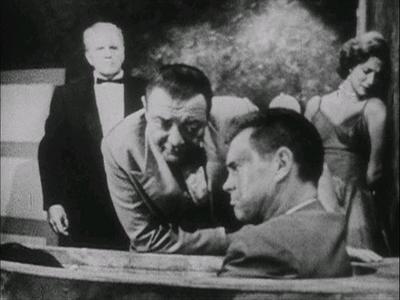 Quick question: Who was the first actor to play James Bond? Hint: It wasn’t Sean Connery, who played the character seven times between 1962’s Dr. No and 1983’s Never Say Never Again.

Give up? It was an American actor named Barry Nelson, who played James “Jimmy” Bond in a 1954 adaptation of Casino Royale produced for American television. That’s him in the bathtub in the photo above, about to be tortured by Peter Lorre and/or one of Lorre’s henchmen.

The entertainment world has been abuzz lately with news that an actor may have finally been picked to play Bond in an upcoming third version of Casino Royale. As it happens, I had placed a hold on the library’s copy of the 1967 version, which was an outright spoof of the James Bond movies even though it took its name from the novel which introduced Ian Fleming’s character — and the library copy happened to become available this week.

FWIW, since placing the hold, I had found a couple other reasons for becoming curious about the 1967 version, which I had seen many years ago and had mostly forgotten. I had recently seen The Life and Death of Peter Sellers (2004), which touches on Sellers’ role in this film (and on the fact that he left the set and/or was fired a couple weeks before he had finished shooting his scenes); and I had also recently seen Otto Preminger’s Bonjour Tristesse (1958) at the local film festival, and I was curious to see David Niven and Deborah Kerr together again in a movie that would be the complete opposite of that melodramatic tragedy.

Come to that, I was just curious to see Kerr in an outright comedy, period. I get the feeling that she, at least, was stretching her range; many of the other stars, from the protean Sellers to the neurotic Woody Allen to the magic-trick-performing Orson Welles, use the film as an excuse to indulge their public personae.

But the reason I had placed a hold on this disc in the first place was because it includes the 1954 TV adaptation of the book. And I found it interesting enough — the way Bond and Leiter have switched nationalities, the way the torture scene has been revised so that it is less sadistic and less sexually charged, the way it cuts the story off before the point in the novel where Bond goes into his monologue about the need for an “Evil Book” to provide a counterpoint to the “Good Book” that is the Bible, etc. Still, while the story has been tamed somewhat, I can’t help thinking this version was kind of edgy for a mid-1950s TV broadcast.

And speaking of that torture scene, I was surprised to see just how much of Fleming’s original story was incorporated into the Peter Sellers section of the 1967 film. Sure, it’s been tweaked so that it’s a parody now and not a straightforward thriller, and the rest of the film has basically nothing to do with the book at all, but some bits — like this shot of Sellers sinking into the chair without a bottom — do work best if you have a knowledge of the original story.

That said, the 1967 film is still a long, disjointed, meandering mess — 2 hours and 17 minutes is far too long for a comedy, especially one that was slapped together with as little rhyme or reason as this one was. There is some nice music, though — I had no idea Dusty Springfield’s ‘The Look of Love’ was written for this film!