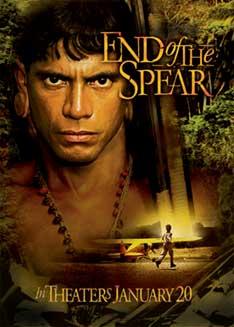 The film in question is End of the Spear, and it is about five American missionaries who were martyred in Ecuador — a story made famous by the popular book Through Gates of Splendor, written by Elizabeth Elliot, widow of Jim. (FWIW, I have never read the book myself, but I did read the comic when I was a kid.) The movie focuses more on one of the other martyrs, Nate Saint, who is played by Chad Allen. And it turns out Allen happens to be gay:

A Christian bookstore chain owner turned-producer said he does not believe the homosexual actor in his upcoming film about five missionary martyrs will present a problem for Christian viewers.

Mart Green, president of Every Tribe Entertainment and founder of the Mardel Christian and Educational Supply chain, called Chad Allen, the star of End of the Spear, “the best actor available to tell our story of faith and forgiveness in the best way possible.”

“Our position is we’re making quality films that tell faith-based stories, so we hire the best,” according to Green.

“Chad was so exceptional that he was the only actor we hired who we didn’t hire a backup for.”

“After someone told me that Chad appeared on the cover of the gay and lesbian magazine The Advocate, we just felt, ‘Hey, he’s still the best actor.’ If anything, he was more concerned when he found that we found out — not that he has been hiding his sexuality. He said, ‘If this movie does well, will you bash gays?’ We said, ‘Chad, we don’t endorse your lifestyle, but we love who you are’.”

As of this writing, there are over 30 comments at that other blog post, debating whether or not it is a Good Thing that a gay actor is playing a famous Christian missionary martyr.

Personally, this debate feels a little been-there,-done-that to me, since one of the most popular films among Christians of the past quarter-century was Chariots of Fire (1981), which also starred a gay actor, Ian Charleson, as a real-life Christian missionary, Eric Liddell, who died what some would consider a martyr’s death. (Well, okay, the missionary/martyr stuff took place after the events depicted in the film, but the film does mention it, and it’s one of the reasons Liddell is remembered so fondly.)

Sometimes it goes the other way, too. In February 2003, The Advocate interviewed Matt Lutz, an actor who played a gay teenager in an episode of Boston Public, and discovered that he was a Christian who disapproved of homosexuality but believed it was important to send out the message that gay-bashing was bad.

So whaddayaknow, sometimes actors are not the characters they play! I think this may be why they call it “acting”.

JAN 21 UPDATE: The movie is out now, and the gay-actor debate is in the air again. While discussing it with some people recently, another example of a gay or bisexual actor playing a famous Christian character, albeit a fictional one, occurred to me: Alec Guinness as G.K. Chesterton’s Father Brown (1954). What’s interesting about this example is that Guinness ended up converting to Roman Catholicism partly because of his experiences making the movie.

October 22, 2005 New Narnia trailer now online
Recent Comments
15 Comments | Leave a Comment
"I have neither noticed that much. I recenty read a leadership book inspired from Cyrus ..."
Hamid Mortazavi Cyrus the Great — a Persian ..."
""AD" stands for "Anno Domini", a Latin expression meaning "In the Year of Our Lord".So ..."
Peter T Chattaway The Chosen — season one, episode ..."
"Why does it say at the start of episode 3 that it takes place 26 ..."
Desiree Chamberlain The Chosen — season one, episode ..."
"What about Hellboy, The Grudge, Ghoulies, and Anaconda?"
45th Spiderbob Group VGCP When R-rated franchises go PG-13 …
Browse Our Archives
get the latest updates from
FilmChat
and the Patheos
Entertainment
Channel
POPULAR AT PATHEOS Entertainment
1