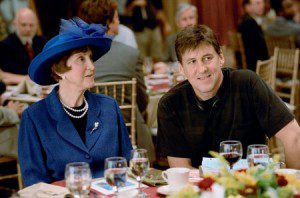 It isn’t every woman who gets to see a pivotal moment from her life interpreted for all the world to see by an Oscar-winning actress. It’s an even rarer woman who gets to see two Oscar-winning actresses re-enact such episodes from her life. But as anyone who has seen Almost Famous or Elizabethtown might have guessed, Alice Marie Crowe — the real-life mother of writer-director Cameron Crowe — is a rare woman indeed.

Almost Famous was the semi-autobiographical account of how Cameron became a reporter for Rolling Stone at the age of 15, with the grudging consent of his protective, intelligent mother, played by Fargo’s Frances McDormand. Elizabethtown is more clearly fictitious, but it was inspired by a much later period in the family’s life.

In the film, Orlando Bloom plays a shoe designer whose latest project has failed so spectacularly that he considers killing himself. But his amusingly clumsy suicide attempt is interrupted by a phone call from his sister, who tells him that their father has just died. What’s more, their mother, played by Dead Man Walking’s Susan Sarandon, is too distraught to deal with the funeral, so he must go to his father’s hometown in Kentucky to represent the family.

Most of the story — including a romance between Bloom and a flight attendant played by Kirsten Dunst, who helps him to see the value of life despite his professional failures — is a work of fiction. But Alice says the mother played by Sarandon is actually a very accurate portrayal of her.

“I had a long marriage with Cameron’s father,” she recalls during a phone interview from her home in San Diego. “He went back to Kentucky to visit his brother, after passing a physical examination with flying colours, so I didn’t have a clue [that he was about to die]. And I received a phone call, and he had died in his sleep, and it was very, very shocking to me; and I became ill, so I was not able to go back for the funeral.”

In the film, Sarandon’s character does go to the memorial in the end. In real life, Alice did not — but she says the events described by Sarandon’s character at that memorial really did happen. “The experience with my neighbour happened, and the going to the lawyer and the various offices in such a shock that I had a face mask on and didn’t realize it until I got back home,” she says. “And I did take up tap dancing and I went to comedy class.”

Alice has had cameos in all the films directed by her son, which also include Say Anything…, Singles, Jerry Maguire and Vanilla Sky. In the new film, she has a little more screen time, as one of Bloom’s paternal aunts.

While Alice, a former psychology professor and family therapist, might have resisted Cameron’s first forays into rock’n’roll journalism, she is obviously proud and even a little amazed, still, of her son’s success. She says she has read “every word he’s ever written,” and at one point she tells me to look up an article on movie soundtracks that he wrote for the Los Angeles Times. “They didn’t change a word, which is unusual,” she marvels.

And while she doesn’t necessarily approve of every element in his films — on the Almost Famous DVD’s commentary track, Cameron teases her about his use of four-letter words — she is particularly proud that his films have positive themes.

“I was born in a Catholic home, and Cameron attended Catholic schools,” she says. “I’m not a real strict practitioner; however, we love Jesus, and he always had this Christian upbringing. And his films — except for maybe Vanilla Sky [a remake of the Spanish film Abre Los Ojos which Cameron directed as a favour to Tom Cruise] — his films are always about redemption. In all of them, even Fast Times at Ridgemont High [which he wrote], there is always triumph over adversity.

“I feel there’s so much cynicism, there’s so much negativity, and I don’t want him to contribute to that. I had a college professor, and a student asked him, ‘How can one tell the difference — what is the difference — between good and evil, a description that will bypass culture and custom?’ And the professor said, ‘That which enhances humanity is good, that which diminishes humanity is not.’ And it’s so simple and so powerful, and that’s how I reared Cameron. You have to pay your earthly rent. You enhance humanity.”

Alice, who divides her time between San Diego and the home she bought in White Rock, BC with her second husband, says she is particularly happy to be speaking to a newspaper that is both Canadian and Christian. “We’ve been great neighbours for so long — except for the War of 1812 and a few other times!” she laughs. “And I just wish Americans would know Canada more, because I’ve fallen in love with Canada.

“And I’m so glad to do the Christian print media, I’m very happy with that. I think this is a very dark, cynical age, and we just have to spread a lot of light, and I think this film does.”

October 20, 2005 Elizabethtown -- the interview's up!
Recent Comments
0 | Leave a Comment
""AD" stands for "Anno Domini", a Latin expression meaning "In the Year of Our Lord".So ..."
Peter T Chattaway The Chosen — season one, episode ..."
"Why does it say at the start of episode 3 that it takes place 26 ..."
Desiree Chamberlain The Chosen — season one, episode ..."
"What about Hellboy, The Grudge, Ghoulies, and Anaconda?"
45th Spiderbob Group VGCP When R-rated franchises go PG-13 …
"Not yet, but I might do something like that once Season 2 is complete."
Peter T Chattaway The Chosen — season one scripture ..."
Browse Our Archives
get the latest from
FilmChat
Sign up for our newsletter
POPULAR AT PATHEOS Entertainment
1