The 3 Wise Men — not exactly a treasure 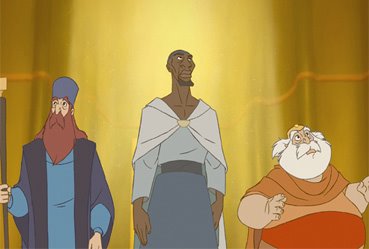 The 3 Wise Men (2003) is a Spanish cartoon that has been dubbed into English for a DVD that will be distributed by Buena Vista through Wal-Mart stores only, beginning tomorrow. The film was produced by veterans of a handful of Disney films from the late ’90s, and the animation itself has a quality that we are not likely to see much of in the near future, now that Disney and DreamWorks have both abandoned traditional hand-drawn animation for the computer-generated kind. So, praise where praise is due.

But beyond that, the film is so bad I don’t know where to begin. So let’s start with what the DVD has to say for itself, on the back:

The classic biblical tale of the three wise men comes to life in a glorious all-new movie. A bright star guides Melchior, Gaspar and Balthazar toward a treasure meant for the unborn King of Kings.

That’s right, this movie has very little to do with the Christ child and a whole heck of a lot more to do with how the Magi — who, for whatever it’s worth, are neither enumerated nor named in the Bible, but were given their separate identities in later traditions — found the treasures which they ultimately gave to him.

And to find these treasures, the Magi must find some hidden temple, the inner rooms of which are guarded by various magic traps and a fiery, mischievous, supernatural entity who asks riddles and scientific questions that must be answered accurately on pain of death; the whole sequence is not unlike what Harry Potter experiences near the end of The Philosopher’s Stone.

Oh, and the temple is dedicated to a deity whose name is spelled “Ashta” in the subtitles but pronounced “Ashter” on both the Spanish and English audio tracks — presumably this is a reference to the goddesses known as “Ishtar” or “Astarte“?

Okay, back to the blurb on the back of the DVD case:

To make the three wise men’s quest even more difficult, King Herod’s evil counselor, Belial, is among them in disguise, trying to sabotage their mission!

Just so we don’t miss the point that we are in utter fantasyland, Belial has pointed ears and looks like a goblin — until the very end (spoiler warning!), when he turns into a giant insect-lizard-y thing, kind of like how the evil wizard became a giant serpent in Disney’s Aladdin (1992). This character’s insertion into the story is a little reminiscent of that ridiculously magical and demonic portrayal of Rasputin in Don Bluth’s Anastasia (1997; my review). Or maybe the evil sorceror added to Richard Rich’s adaptation of Rodgers & Hammerstein’s The King and I (1999) is a better parallel. 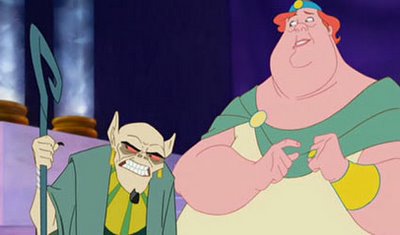 Naturally, Herod and Belial are vanquished in the end, and Herod scampers off like a big fat baby, but this has the odd effect of letting the viewers leave these characters on a “hurrah!” note, when anyone familiar with the story would know that Herod still had commit some pretty serious evil to commit.

Once again, back to the blurb on the back of the DVD case:

Will they succeed in their righteous pursuit? Their fate depends on whether they learn to work together for the common good.

That’s right, the Magi are constantly bickering and squabbling and have to learn how to get along, just like children. To cite just one example of how they rub each other the wrong way, the character voiced by Martin Sheen grumbles that one of the other characters isn’t really a serious magician after all; and as evidence of this, he points to the other character’s shadow, which is shaped like a chicken — the result of a magic spell gone bad, apparently. 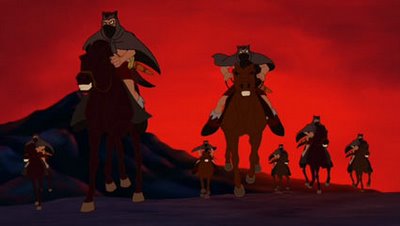 And that’s just the beginning. There is also a Roman soldier named Tobias who serves Herod but falls in love with a sexy, bare-midriffed Jewish rebel girl named Sarah (voiced by Christian recording artist Jaci Velasquez); there are the spies for Herod who transform into red-eyed wolves; there is the brief appearance of Midas, as a child who accidentally learns how to turn things into gold in a lab run by one of the Magi; there is the Jewish courtier Baruch, whose family has been keeping an ancient secret from the beginning of time, Knights Templar-style; and there’s the scene in which one of the Magi accidentally turns someone’s clothes into a department-store Santa suit.

And then there is the absolutely non-Christian but oh-so-Disney message that we should always follow our hearts (because our hearts are never, ever wrong). When the Magi succeed in making their way to the heart of the temple where the treasures can be found, a woman’s voice (Ashta’s?) comes down from on high and declares: “But you still have one great test before you, the greatest test of all. Trust in yourselves. And remember that few people believed that little David could defeat the great Goliath.”

Um, well, David actually trusted in YHWH as much as he might have trusted in himself, but never mind that. The more important point here is that, at one of the film’s most thematically important points, a pre-Christian deity expresses a post-Christian theme — and this, in a film that claims to be telling a Christian story. 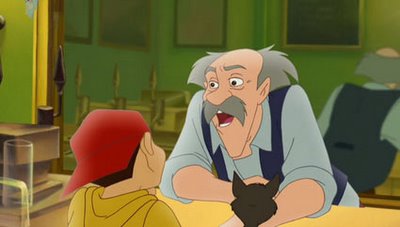 And as if all these things were not curious enough, the entire story is told as a flashback by an older man to a boy who has lost faith in Christmas because he didn’t get any presents. (Oddly, despite this being a European production, the framing narrative is set in New York.) Don’t worry, the old man tells him; the Three Wise Men will get you something on their special holiday, which is January 6. “You only have to believe in them,” he says. So now, basically, the Magi are just a substitute for Santa Claus. And if the children who see this film still don’t get any presents…?

Suffice to say I won’t be showing this to my children. There are too many other, better, less-clichéd cartoons out there.

Footnote: The DVD’s official website apparently has a trailer and a music video, but the DVD in my possession has no bonus features whatsoever — just two audio tracks and one subtitle track.