Son of Man gets people talking 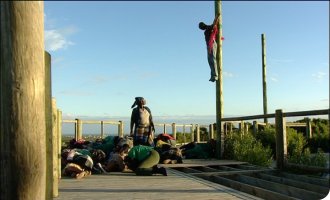 Looking for more info on Mark Dornford-May’s Son of Man, which sets the life of Jesus in modern South Africa? Last Monday, the Los Angeles Times ran the following story, which adds some interesting info that earlier stories did not have:

PARK CITY, Utah — His name is Jesus, a disciple betrays him, he dies a violent death, his story is told in a foreign language — and Mel Gibson has nothing to do with it.

Unlike its very distant cinematic cousin “The Passion of the Christ,” which focused on Christ’s persecution, torture and crucifixion, the new movie “Son of Man” celebrates Christ as a benevolent teacher and peacemaker. As at least one critic already has noted, the film’s title could easily be “The Compassion of the Christ.” Yet just as Gibson was unable to persuade anyone to release his 2004 interpretation of the New Testament, British filmmaker Mark Dornford-May has not yet been able to convince an American company to take on “Son of Man,” which had its world premiere last week at the Sundance Film Festival.

“I just hope that a distributor has the courage to see it,” Dornford-May said in an interview in the middle of the festival. The previous evening, a late-night “Son of Man” screening at Sundance generated so much discussion that theater managers were forced to cut off a question-and-answer session as the hour approached 2 a.m.

It’s easy to understand why there was so much to talk about. Performed by the South African theater ensemble Dimpho Di Kopane, “Son of Man” is a contemporary musical allegory set against a backdrop of a brutal tribal war. Rather than unfolding in ancient Palestine, the story has been shifted to a modern-day South African township.

The result is a film that is as likely to appeal to progressive Christians as “The Passion of the Christ” pleased religious conservatives; “Son of Man’s” organizing principle is not Jesus’ suffering, but his peace and justice ministries. . . .

Dornford-May, whose last film contemporized Bizet’s opera “Carmen” in a similar fashion, initially developed his biblical drama as the stage play “The Mysteries” with his Dimpho Di Kopane troupe, touring the production around the world. The cast for both the play and the movie came of age under apartheid, an experience that proved useful in making “Son of Man.”

“All of the actors could draw on their terrible memories of the past,” Dornford-May said. “So when you’re working on those scenes in the film, you don’t need to say, ‘Imagine what it’s like to be chased by a policeman.’ “

In adapting the story for film, Dornford-May said he was not interested in studying other retellings of the life of Jesus. Instead, he was drawn to accounts of Steve Biko, a black South African anti-apartheid activist who died in police custody in 1977. (The filmmaker says those particularly familiar with Biko’s death will notice that “Son of Man’s” Jesus is carried to his grave in a truck, known in South Africa as a bakkie, similar to the one that transported Biko.)

At every narrative turn, Dornford-May said he tried to keep focused on interpreting the Gospels as not only a spiritual story but also a political one, “with a message of humanity and equality. That is something I believe quite passionately in,” said the director, who was raised Methodist and remains a regular churchgoer. “I find it amazing that the church spends any time debating whether gay people should be priests when people are dying of hunger and sick people can’t get medicine.”

Dornford-May said he wrestled with how to depict the New Testament’s miracles, which include Jesus raising the dead and healing the sick. The solution was to show them as recorded by a video camera carried by Judas, so that the audience is forced to look at Jesus through the eyes of his betrayer. . . .

Sounds even more interesting than it did before.

FEB 3 UPDATE: Thanks to Matt Page for linking to reviews from Roger Ebert, Variety and others, over at his Bible Films blog.

February 2, 2006 CT Movies picks 2005's "most redeeming films"
Recent Comments
3 Comments | Leave a Comment
"I have neither noticed that much. I recenty read a leadership book inspired from Cyrus ..."
Hamid Mortazavi Cyrus the Great — a Persian ..."
""AD" stands for "Anno Domini", a Latin expression meaning "In the Year of Our Lord".So ..."
Peter T Chattaway The Chosen — season one, episode ..."
"Why does it say at the start of episode 3 that it takes place 26 ..."
Desiree Chamberlain The Chosen — season one, episode ..."
"What about Hellboy, The Grudge, Ghoulies, and Anaconda?"
45th Spiderbob Group VGCP When R-rated franchises go PG-13 …
Browse Our Archives
get the latest updates from
FilmChat
and the Patheos
Entertainment
Channel
POPULAR AT PATHEOS Entertainment
1