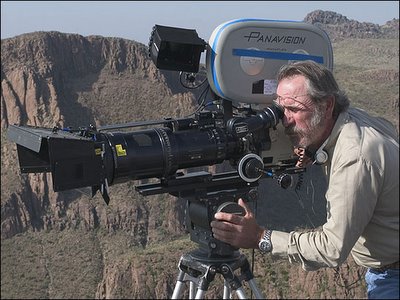 In December, Barry Pepper talked about the influence of the Bible and the works of Flannery O’Connor on The Three Burials of Melquiades Estrada, written and directed by Tommy Lee Jones. Now Jones himself discusses the subject in the Boston Globe:

”O’Connor is important to the way this movie is constructed,” he continues. ”What you do is you consider some so-called religious thinking without the didacticism of the classical approach. You look for the allegorical intentions of what we’re taught in the Bible, and then find some way to have it revealed or expressed by common experience. You’ll find this happening over and over again in O’Connor, who was a rather classical Catholic thinker who wrote about nothing but backwoods north Georgia rednecks.”

”Ecclesiastes is essential to the movie as well,” he says. ”It has to do with the passage of time. You want to start thinking as an actor that the past, the present, and the future are occurring simultaneously, and God requires an accounting of all three.”

Thanks to Amy Welborn for the link. Also thanks to Christian for linking to this NPR interview where Jones says:

People ask me to describe Huey Calloway, the character you just heard, and I’ve found it convenient to describe him as a Buddhist soul in a Calvinist world, and I haven’t yet thought up a catch phrase for Three Burials, but it has something to do with the consideration of the mechanics of faith.

And from there he starts talking about Flannery O’Connor again.

February 5, 2006 What I've been doing with my weekend
Recent Comments
2 Comments | Leave a Comment
"I have neither noticed that much. I recenty read a leadership book inspired from Cyrus ..."
Hamid Mortazavi Cyrus the Great — a Persian ..."
""AD" stands for "Anno Domini", a Latin expression meaning "In the Year of Our Lord".So ..."
Peter T Chattaway The Chosen — season one, episode ..."
"Why does it say at the start of episode 3 that it takes place 26 ..."
Desiree Chamberlain The Chosen — season one, episode ..."
"What about Hellboy, The Grudge, Ghoulies, and Anaconda?"
45th Spiderbob Group VGCP When R-rated franchises go PG-13 …
Browse Our Archives
get the latest updates from
FilmChat
and the Patheos
Entertainment
Channel
POPULAR AT PATHEOS Entertainment
1