This movie was not screened for critics. 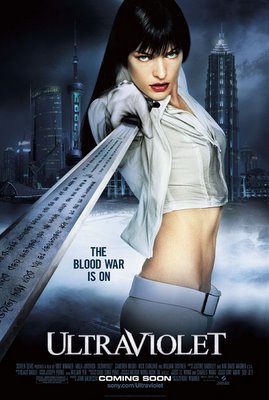 The movies that come out in the first few months of the year are often, shall we say, crappy. So I guess I shouldn’t be surprised that Ultraviolet — which, at first glance, looks like a retread of Milla Jovovich’s Resident Evil movies (2002-2004; my review) — is the latest presumably schlocky film to open in wide release without being screened for critics in advance; as far as the studio’s concerned, critics are irrelevant at best and a hindrance at worst, and the movie’s target audience probably wouldn’t care what they have to say anyway. Still, that said, I can’t remember another two-month period in which so many movies opened wide without being screened for the media. Indeed, it seems like barely a week has gone by since New Year’s Day without at least one movie bypassing the film critics.

First there were Grandma’s Boy and Bloodrayne (January 6), both of which opened well out of the weekly top ten anyway; no fan base there! (As I recall, a screening was actually planned for the former film, but then it was called off.) Incidentally, this was the same weekend Hostel opened at #1, and while my admittedly fallible memory tells me that there was a press screening for it which I missed, I can find no trace of it in my records.

Then there was Underworld: Evolution (January 20), which opened at #1.

Then there was Big Momma’s House 2 (January 27), which may have been shown to a handful of critics, but not many, and certainly not in my neck of the woods; it also opened at #1.

Then there was When a Stranger Calls (February 3), which also opened at #1.

Then there was Date Movie (February 17), which opened at #2.

Then there were Madea’s Family Reunion and Doogal (February 24), the former of which opened at #1. Both films were actually screened for critics in Canada, which is how I saw them, but apparently neither film was screened in the United States — and what’s remarkable about that is that both films ended up on the American top ten for the week but not the Canadian top ten!

And now, there is Ultraviolet (March 3).

Note that three of these films were produced by Screen Gems — is it now their policy to just avoid critics’ screenings in general? — while another three were produced by 20th Century Fox. So maybe it’s not the industry-wide trend that it seems to be, yet.

Even so, there’s something alarming about this trend, though I’m not entirely sure what it portends. Is it a sign that movies are increasingly sucky, or that sucky movies are as profitable as ever (at least when they are either horror films or comedies featuring black men in drag as elderly women)? Or will the avoidance of critics spill over into films with an actual degree of merit?

MAR 23 UPDATE: And now, there are Stay Alive and Larry the Cable Guy: Health Inspector (March 24).

APR 4 UPDATE: And now, there are The Benchwarmers and Phat Girlz (April 7).

AUG 17 UPDATE: And now, there are Snakes on a Plane and, probably, Material Girls (August 18).

SEP 1 UPDATE: And now, there are The Wicker Man and Idiocracy and, apparently in the U.S. only, Crank (September 1).

SEP 8 UPDATE: And now, there is The Covenant (September 8).

DEC 26 UPDATE: And now, there is Black Christmas (December 25), which was shown to critics in Canada but not in the U.S.