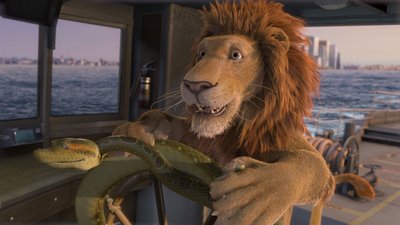 Disney recently abandoned traditional hand-drawn animation in favour of the CGI kind. They thought this would increase their share of the increasingly competitive animation market.

And last year, the release of Chicken Little, which they promoted like crazy for months in advance, seemed to vindicate their decision. True, the film’s ultimate gross of $135.4 million was less than that of every computer-animated Pixar or DreamWorks or Blue Sky cartoon ever made except for Antz (1998; $90.8 million) and Robots (2005; $128.2 million), but it was also better than that of every Disney film of the past decade, except for Tarzan (1999; $171.1 million) and Lilo & Stitch (2002; $145.8 million).

So last year, it seemed like CGI might be the answer to Disney’s problems. But now, The Wild has brought the studio back down to earth. Disney’s second CGI cartoon is estimated to have opened with a mere $9,559,000, and if the estimate holds when final figures are released tomorrow, it will be the lowest box-office take for the wide release of any Disney cartoon since The Rescuers Down Under opened with $3.5 million in November 1990 — not counting Fantasia 2000, which played only in IMAX theatres for its first few months and is thus something of a special case.

Anyway, The Rescuers Down Under grossed a mere $27.9 million when all was said and done; and the worst Disney box-office performer since then is Treasure Planet (2002), which grossed a mere $38.2 million despite being released over the American Thanksgiving weekend; and the next-worst is Home on the Range (2004; $50 million), which was Disney’s last hand-drawn cartoon and the only other Disney film of the past 30 years, besides The Wild, to be released in April. Clearly, this ain’t their month.

Indeed, given that Disney and Pixar recently merged and they have Cars coming out in just two months, it almost seems as though Disney released The Wild now, in April, two weeks after the surefire-hit Ice Age sequel, just to get it out of the way.

April 17, 2006 Canadian box-office stats -- April 16
Recent Comments
6 Comments | Leave a Comment
"I certainly hope to! Just haven't had the time to do Season 2 yet."
Peter T Chattaway The Chosen — season one scripture ..."
"Hi Peter.Thanks for this extensive list. Will you be doing the same for all seasons? ..."
Meelperd The Chosen — season one scripture ..."
"I have neither noticed that much. I recenty read a leadership book inspired from Cyrus ..."
Hamid Mortazavi Cyrus the Great — a Persian ..."
""AD" stands for "Anno Domini", a Latin expression meaning "In the Year of Our Lord".So ..."
Peter T Chattaway The Chosen — season one, episode ..."
Browse Our Archives
get the latest updates from
FilmChat
and the Patheos
Entertainment
Channel
POPULAR AT PATHEOS Entertainment
1