Time for a few updates on recently-posted items.

Derrickson recognizes the care that needs to be taken and the potential that lies within the material; he’s also fully aware that it’s a daunting and delicate task that will take a little time to bring to the screen. “There’s still work to be done on the script,” Derrickson tells Fango. “Stu has done a lot of work for Alex Proyas and is a good friend of mine; I’m a big admirer of his writing. More than anything else, I’m very excited about trying to create a world that is epic in regards to angels and demons and heaven and hell, and do it in some way that’s original and hasn’t been done.” 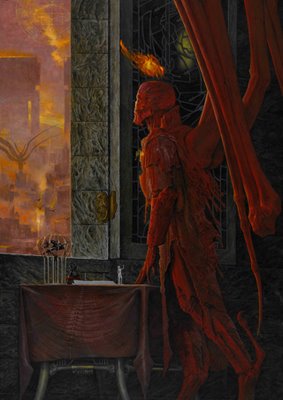 Joining the conceptual team is none other than artist Wayne Barlowe, whose book BARLOWE’S INFERNO has given readers a nightmarish and fascinating look at hell . . . . Derrickson is just one of a handful of directors to use Barlowe during the early stages of preproduction on their films: The painter/illustrator has also lent designs on a number of Hollywood projects, notably Guillermo del Toro’s BLADE II and HELLBOY. “One of the first things I did was to go after Stuart and Wayne; I liked Stuart’s writing skills and Wayne’s visual skills,” the director says. “INFERNO was the reason I was so passionate about trying to get Wayne involved, and I knew that if PARADISE LOST was going to work, it’d have to have that kind of visual imagination.”

FWIW, Barlowe also did some creature designs for the third and fourth Harry Potter films — i.e., the good ones!

2. Reuters reports that English Catholics disagree with their brethren in the Vatican over how to deal with The Da Vinci Code:

A group of prominent English Roman Catholics is opposing a Vatican call to boycott the film “The Da Vinci Code,” saying the movie’s release is not a threat but a chance to explain their faith, their spokesman said on Thursday.

A top official close to Pope Benedict has blasted Dan Brown’s best-selling book as full of anti-Christian lies and urged Catholics to boycott the new film that is based on it.

“The danger is that by appearing threatened we give the book and the film the theological credence it doesn’t have,” Ivereigh said. . . .

Last month, Archbishop Angelo Amato, the number two official in the Vatican doctrinal office, launched a broadside against the book at a Catholic conference in Rome and said “I hope that you will all boycott the film.”

Ivereigh, summarizing the group’s recommendations, said: “We don’t think it helpful to use the kind of language this Vatican official did because it falls directly into the trap laid by Dan Brown, which is that the Church is defensive because it is engaged in a 2,000-year-old cover-up.” . . .

3. Now Reuters has a report on Jesus Camp:

Becky Fischer, who runs an evangelical summer camp where children as young as six are encouraged to “take back America for Christ,” says indoctrinating children is not only right but essential.

Fischer is the central character in “Jesus Camp,” a documentary about Pentecostal evangelical Christians, some of whom send their children to summer camps where they pray, “speak in tongues” and are encouraged to campaign against abortion.

“Extreme liberals, they have to look at this and start shaking in their boots,” Fischer says in the film, which was showing at the Tribeca Film Festival this week.

With no voice-over or commentary, the movie follows Fischer at events for children in North Dakota and Missouri.

In one scene a cardboard President George W. Bush is brought on stage at an assembly so attendees can pray that he make America “one nation under God.” In another a preacher shows plastic models of tiny fetuses and leads a prayer saying: “God end abortion, and send revival to America.”

Heidi Ewing, who directed the film with Rachel Grady, said the aim was to be balanced and show a slice of U.S. culture unfamiliar to many in America and abroad. Ewing said they wanted to include a critical voice to question Fischer but had deliberately chosen a Christian — radio host Mike Papantonio — to be that voice of dissent. . . .

“The reason you go for kids is because whatever they learn by the time they’re 7 or 8 or 9 years old is pretty well there for the rest of their lives,” Fischer says on a radio show in which she is challenged by Papantonio, a practicing Methodist who is also a director of liberal Air America radio.

“As I understood, your question to me was ‘Do you feel it’s right for the fundamentalists to indoctrinate their children with their own beliefs?’ I guess fundamentally, yes I do, because every other religion is indoctrinating their kids. I would like to see more churches indoctrinating,” she says.

Papantonio responds: “You can tell a child anything … you can make a child into a soldier that carries an AK47.”

Fischer says: “You could call it brainwashing, but I am radical and passionate in teaching children about their responsibility as Christians, as God-fearing people, as Americans.” . . .

Grady, who said that as a Jewish woman raised on the East Coast she knew very little about Evangelicals before making the film, said “Jesus Camp” had proved eye-opening for largely liberal New York audiences at the Tribeca Film Festival.

Another pastor featured in “Jesus Camp,” Ted Haggard, head of the National Association of Evangelicals, says in the movie children are fueling a boom in his churches that would continue to have a profound effect on U.S. politics.

“There’s a new church like this every two days,” he said. “It’s got enough growth to essentially sway every election. If the Evangelicals vote, they determine the election.”

UPDATE: Variety has posted interviews with the directors here and here, as well as a three-minute set of film clips here.

May 4, 2006 More details about Nativity!
Recent Comments
1 Comment | Leave a Comment
Browse Our Archives
get the latest updates from
FilmChat
and the Patheos
Entertainment
Channel
POPULAR AT PATHEOS Entertainment
1