The politics of Superman (e.g. “all that stuff”) 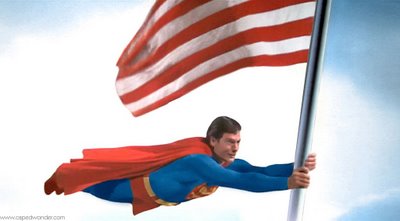 In the early days — for example, in the cartoons produced by the Fleischer studio during World War II — Superman fought for “truth and justice”. In later years, certainly by the time of the 1950s TV show, this was revised to “truth, justice and the American way”. But now, it seems that Superman Returns has taken “the American way” back out of the equation; in one scene, Perry White asks if Superman still stands for “truth, justice and all that stuff.”

Via Reuters, the Hollywood Reporter — which erroneously says that “the American way” goes back to Superman’s beginnings in the comics back in 1938 — reports that the screenwriters behind Superman Returns left the phrase out very deliberately:

“We were always hesitant to include the term ‘American way’ because the meaning of that today is somewhat uncertain,” Ohio native [Michael] Dougherty explains. “The ideal hasn’t changed. I think when people say ‘American way,’ they’re actually talking about what the ‘American way’ meant back in the ’40s and ’50s, which was something more noble and idealistic.”

While audiences in Dubuque might bristle at Superman’s newfound global agenda, patrons in Dubai likely will find the DC Comics protagonist more palatable.

And with the increasing importance of the overseas box office — as evidenced by summer tentpoles like “The Da Vinci Code” — foreign sensibilities can no longer be ignored.

“So, you play the movie in a foreign country, and you say, ‘What does he stand for? — truth, justice and the American way.’ I think a lot of people’s opinions of what the American way means outside of this country are different from what the line actually means (in Superman lore) because they are not the same anymore,” [Dan] Harris says. “And (using that line) would taint the meaning of what he is saying.”

Interestingly, despite the screenwriters’ best efforts, it is not too hard to imagine that their Superman might still be seen to have certain parallels with current American policy. Jeffrey Overstreet recently received an e-mail from one of his readers which stated:

He still stands for truth justice and “the american way” even if the film is too embarrassed to say it. Many people say we as a nation don’t belong in Iraq or Afghanistan. Its not our problem. In the same way, Superman has no right to interfere with human problems. He’s an alien, no one asked him to solve the worlds problems. BUT HE DOES ANYWAY! Not because he does it out of some moral oblegation (ie great power comes greeat responsibility in spiderman) but because thats who he is; who he was raised to be as an American. He does the right thing no matter what. Likewise, America will always be there for the world even if its unpopular for us to interfere.

Similarly, some moviegoers have wondered if the Superman of this film really has the right to hover above the city and eavesdrop on everybody’s private conversations, or to snoop on Lois Lane’s home life by looking through her walls — which, in its own way, brings to mind recent allegations regarding the current American government’s efforts to track phone calls, and the like.

It’s all rather reminiscent of the criticisms of the superhero genre, and the possible cultural and political influence of this mythos, that Robert Jewett and John Shelton Lawrence make in The Myth of the American Superhero — criticisms that I don’t always agree with, but I do find them interesting, and worth thinking about.

UPDATE: Here’s another thought. The first film came out in 1978, only a few years after the Vietnam War and Watergate . And in that film, Superman tells Lois Lane that he is there to fight for “truth, justice and the American way” — a statement that prompts a cynical Lois to laugh and say that he’ll be fighting every politician in the country. So the film acknowledges the disillusionment of its era, and responds to it, by presenting Superman as the noble and idealistic embodiment of all that the country once stood for.

It could be interesting to explore why the new film, coming at a time of similar disillusionment, does not go this route, and instead seems to steer around the political debates of our times even as it inadvertently lends itself to those political debates.

July 1, 2006 Superman Returns = The New World?
Recent Comments
3 Comments | Leave a Comment
"I have neither noticed that much. I recenty read a leadership book inspired from Cyrus ..."
Hamid Mortazavi Cyrus the Great — a Persian ..."
""AD" stands for "Anno Domini", a Latin expression meaning "In the Year of Our Lord".So ..."
Peter T Chattaway The Chosen — season one, episode ..."
"Why does it say at the start of episode 3 that it takes place 26 ..."
Desiree Chamberlain The Chosen — season one, episode ..."
"What about Hellboy, The Grudge, Ghoulies, and Anaconda?"
45th Spiderbob Group VGCP When R-rated franchises go PG-13 …
Browse Our Archives
get the latest updates from
FilmChat
and the Patheos
Entertainment
Channel
POPULAR AT PATHEOS Entertainment
1