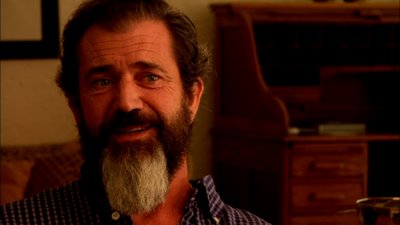 Mel Gibson was arrested in Malibu Friday morning for driving under the influence. The Los Angeles Times noted that the stretch of road where Gibson was arrested has a colourful past when it comes to this sort of thing, and that Gibson has “no previous driving-related convictions or accidents in California”; and People noted that Gibson, who joined Alcoholics Anonymous in 1991 and has been very open about his past substance abuse, “ran a red light and collided with another car in 1984 while driving drunk.”

And then the story got worse. Late Friday night, TMZ.com posted four pages of what it claimed was a hushed-up police report — a report which alleges that Gibson made anti-Semitic remarks to the police, among other things. During the controversy which surrounded the release of The Passion of the Christ (2004), many of Gibson’s defenders said it was only Gibson’s father who was anti-Semitic, and not Gibson himself — but if TMZ.com’s report is true, it would seem Mel is a wee bit guilty of that, too.

Today, reports the Associated Press, Gibson released a statement and apologized in some detail for the incident:

“After drinking alcohol on Thursday night, I did a number of things that were very wrong and for which I am ashamed. I drove a car when I should not have, and was stopped by the L.A. County sheriffs. The arresting officer was just doing his job and I feel fortunate that I was apprehended before I caused injury to any other person.

“I acted like a person completely out of control when I was arrested, and said things that I do not believe to be true and which are despicable. I am deeply ashamed of everything I said and I apologize to anyone who I have offended.

“Also, I take this opportunity to apologize to the deputies involved for my belligerent behavior. They have always been there for me in my community and indeed probably saved me from myself. I disgraced myself and my family with my behavior and for that I am truly sorry.

“I have battled the disease of alcoholism for all of my adult life and profoundly regret my horrific relapse. I apologize for any behavior unbecoming of me in my inebriated state and have already taken necessary steps to ensure my return to health.”

It’s not exactly a point-by-point confirmation of the TMZ.com account of the arrest, but it’s certainly far from a denial.

And y’know, I have to say I admire Gibson for being so contrite, and so promptly at that. Some people will use this incident to underscore the charge that Gibson’s death-of-Jesus movie was anti-Semitic, but to me, the whole episode just underscores Gibson’s own awareness of his own sin and need for repentance, which were also prominent themes surrounding that film.

And, on a less important note, given that this incident involved Mel Gibson and an automotive vehicle, I cannot help but wonder how ever-so-slightly different the publicity for Who Killed the Electric Car? might have been, if the film — which features Gibson prominently among its interviewees, and which is the source of the picture above — had come out just a wee bit later.

July 29, 2006 Gospel singers dominate Kenyan film industry
Recent Comments
3 Comments | Leave a Comment
"Gentlepersons:While I am a lifelong Christ-follower and served as Chaplain to a graduate program in ..."
Darrell A. Harris Exclusive: Patrick and Paul Aiello on ..."
"I know this is from 5 years ago, but I just got around to seeing ..."
digital bookworm Exclusive: Watch the trailer for Becoming ..."
"Thanks so much for making this list. I was thinking of doing something similar, but ..."
Bill Kudrle The Chosen — season one scripture ..."
"Per Wikipedia: "In classical rhetoric and logic, begging the question or assuming the conclusion is ..."
Peter T Chattaway Review: The Most Reluctant Convert: The ..."
Browse Our Archives
Related posts from FilmChat