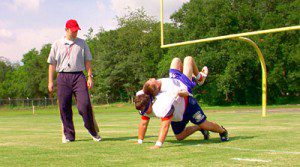 Facing the Giants, a low-budget movie about a high-school football team, was recently rated PG for parental guidance in the U.S. The film’s Christian producers and the Motion Picture Association of America (MPAA), which hands out movie ratings south of the border, agree the film should be rated PG. But they don’t agree on why the film was rated PG — thus launching one of the latest and silliest skirmishes in the culture wars.

Kris Fuhr, vice-president of marketing for Provident Films, told one reporter she had expected the film to be rated PG because the story dealt with mature subject matter, such as infertility. But when she asked the MPAA why the film got that rating in the end, the person she spoke to reportedly referred to the film’s evangelistic content.

Now, however, the MPAA says the rating was based on other factors. The organization has been flooded with tens of thousands of protest e-mails, but its representatives insist the film’s religious elements had nothing to do with their decision. Instead, they point to the very same story elements that led Fuhr to think the film would be rated PG anyway.

Meanwhile, the federal government is threatening to get involved. In a stern letter to MPAA chairman Dan Glickman, Republican House Majority Whip Roy Blunt stated, “This incident raises the disquieting possibility that MPAA considers exposure to Christian themes more dangerous for children than exposure to gratuitous sex and mindless violence.”

That’s a pretty ignorant remark, but it may be par for the course where federal politics are concerned. PG-rated films, which are pretty rare these days, are almost always made for children or family audiences. If it’s gratuitous sex and mindless violence you want, you usually have to look for films rated at least PG-13.

It’s hard to take either side of this debate seriously. The MPAA is notoriously secretive, unpredictable and prone to treating independent films more strictly than it treats the films that are made by the major studios — which established the MPAA in the first place.

There once was a time when the MPAA did bend over backwards to be lenient to films with a religious element. In the late 1960s and 1970s, when the ratings system was still new, nearly every movie with a crucifixion was rated G, even if it had other forms of violence as well; the list includes Ben-Hur, The Greatest Story Ever Told, Godspell, The Gospel Road and even the rather controversial and slightly drug-addled Jesus Christ Superstar.

These days, the rules are more strict. The Gospel of John was rated PG-13 — “for violence involving the crucifixion” — and so was King of Kings, a 1961 film that was not submitted for a rating until the DVD came out in 2004. What’s more, Campus Crusade’s Jesus film was rated G in 1979, but when elements of it were edited into The Story of Jesus for Children in 2005, the resulting film was rated PG “for some violent and thematic elements.”

In addition, nearly every theatrical Billy Graham movie produced since the ratings came into effect has been rated PG or PG-13; the only exceptions are Two a Penny (1969) and Joni (1979). And ever since the mid-1990s, when the MPAA began to explain its ratings, these films have earned their PG ratings for “thematic elements” or “thematic material.”

Finally, it isn’t just religious red-staters who get this treatment. Al Gore’s global-warming documentary An Inconvenient Truth — basically just a filmed lecture — has also been rated PG “for mild thematic elements.” So it does seem the MPAA is acting on the principle that parents need to be alerted whenever a film has a specific religious or political agenda.

But the fact that the MPAA has been so consistent on this point lately is exactly what makes the controversy over Facing the Giants so ridiculous. You can hardly blame the filmmakers for exaggerating the significance of this rating, since it generates publicity for their film, which comes out in September. But everyone else should stop being so sensitive.

July 21, 2006
Star Trek and the Knights of the Round Table
Next Post

July 21, 2006 Monster House -- the review's up!
Recent Comments
0 | Leave a Comment
Browse Our Archives
get the latest from
FilmChat
Sign up for our newsletter
POPULAR AT PATHEOS Entertainment
1

Entertainment
Exclusive: James Wan on his return to horror,...
FilmChat