Dammit, I have work to do, but news of the upcoming The Sarah Connor Chronicles hit a nerve — my time-travel continuity- checking nit-picking nerve — and I found myself wondering which of the Terminator movies‘ contradictory timelines the series would follow, or whether the series would just invent a brand new timeline of its own. And, naturally, I just had to go through my DVDs looking for all the contradictions and whatnot.

Note: I did not actually watch all three films; instead, I just went to the key scenes in all three films that, according to my memory and a couple other sources, give us some clue as to when these stories take place. If I have missed anything, by all means, let me know and I might expand this post at some later date.

So, first up, The Terminator, which came out in October 1984: 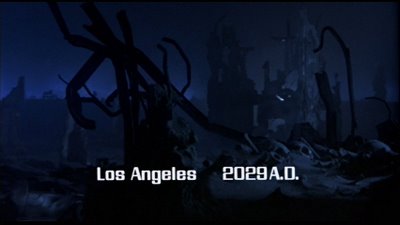 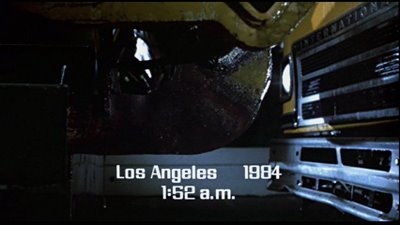 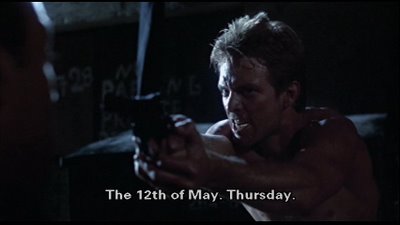 Then, there is Terminator 2: Judgment Day, which came out in July 1991:

Again, this seems clear enough. Once again, the future part of the story takes place in 2029, but this time, the present part of the story takes place in 1995 (or, possibly, in January or February 1996). We can discern this from the fact that John Connor’s date of birth is clearly listed on the police officer’s computer as February 28, 1985 — exactly nine-and-a-half months after the events of the first film — and from the fact that his age is clearly listed as 10.

The second film affirms the timeline of the first film in other ways, too — on two separate occasions, the events of the first film are said to have taken place in 1984, once in Sarah Connor’s opening monologue, and once when the police come down to the insane asylum and show photos from that first film to Sarah Connor: 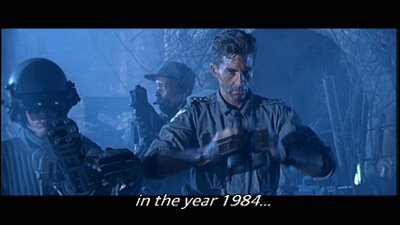 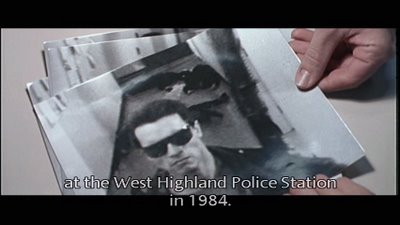 And the second film certainly couldn’t take place much later than 1995 or early 1996, because the characters are trying to prevent an event that is supposed to take place at some later point, on August 29, 1997 (coincidentally, exactly nine years ago today): 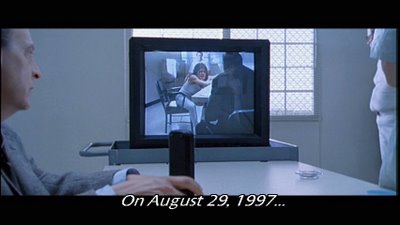 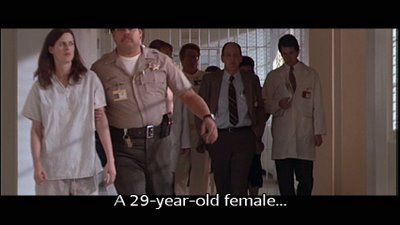 There is also a scene where the Terminator sent back to protect John Connor says he came from 35 years in the future: 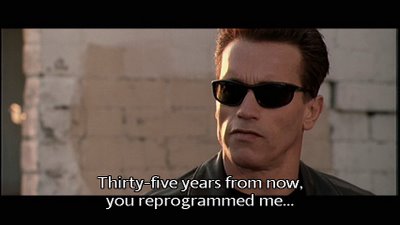 This last scene is a tad problematic, since Terminators tend to be very precise with their numbers, and the gap between 1995 and 2029 is actually 34 years. Perhaps he was sent back from 2030 instead, one year after John Connor’s supposed victory? That might explain why the T-1000 is a more advanced model. Alas, it would also mean that Kyle was wrong, when he said in the first film that John Connor had already won the war against the machines.

But, well, that’s what the numbers on the screen say.

Then, there is Terminator 3: Rise of the Machines, which came out in July 2003:

Right away, we got a problem. This film says John Connor was 13 years old and in eighth grade — and not 10 years old — when the second film happened. It gets even more complicated:

We are told that Sarah Connor died of leukemia in 1997. John Connor then tells us that she lived for three years after the disease was diagnosed, so she was apparently diagnosed in 1994 — and after the events of the second movie. That means the second movie must have happened even earlier than 1994, even though the second movie itself tells us it takes place later than that!

Note, too, that Sarah’s year of birth is now given as 1959 — so if she was 29 during the events of the second film, then that film must have taken place in 1988. Oh, but wait — if John is now supposed to have been 13 in the second film, then Sarah would have been only 16 when John was born and possibly only 15 when Kyle saved her from the first Terminator and impregnated her.

My guess is that the third film is treating the second film as though it basically took place in the year it was released, and as though John Connor were basically the age of the actor who played him; if that is the case, then, as far as the third film is concerned, the events of the first film took place around 1978 — six years before The Terminator, a very 1980s kind of movie, actually came out.

Coincidentally, these revisions to the back story permitted the filmmakers to set the third film more or less in the year when it came out, and to allow Nick Stahl, the new actor who plays John Connor, to more or less play his own age; he was born in 1979.

Does the film give us any other reasons to believe that it takes place around the time of its own release? Yes, it does:

The Terminator’s internal chronometer counts backwards from the future to July 2004 — one year after the film’s release — and a nuclear fallout shelter with 1970s-style architecture and technology is said to be 30 years old. In addition, the events of the second film are said to have taken place “over 10 years ago”, and presumably not all that much over 10 years ago.

Oh, and lest there was any doubt that the sequels have debunked Kyle’s claim that John Connor won the war decisively in 2029 …

So, anyway, when will The Sarah Connor Chronicles take place? Will it take place after the second film and pretend the third film doesn’t exist? If so, will they set the series in the mid- to late 1990s, to be consistent with that film? Or will the producers follow the timeline of the third film, and set the series even earlier? Or will they ignore all the various timelines, and set it today?

August 30, 2006 Back to the Future re-edited!
Recent Comments
13 Comments | Leave a Comment
"I have neither noticed that much. I recenty read a leadership book inspired from Cyrus ..."
Hamid Mortazavi Cyrus the Great — a Persian ..."
""AD" stands for "Anno Domini", a Latin expression meaning "In the Year of Our Lord".So ..."
Peter T Chattaway The Chosen — season one, episode ..."
"Why does it say at the start of episode 3 that it takes place 26 ..."
Desiree Chamberlain The Chosen — season one, episode ..."
"What about Hellboy, The Grudge, Ghoulies, and Anaconda?"
45th Spiderbob Group VGCP When R-rated franchises go PG-13 …
Browse Our Archives
get the latest updates from
FilmChat
and the Patheos
Entertainment
Channel
POPULAR AT PATHEOS Entertainment
1