Amazing Grace — thumb up, thumb down 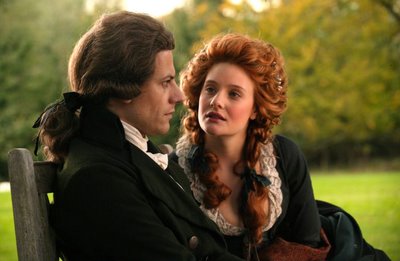 Amazing Grace played the closing gala at the Toronto film festival tonight, and the industry trade papers are divided on the film’s merits. Eddie Cockrell of Variety sort of likes it, and writes:

Crisply told and sincerely thesped, “Amazing Grace” is a workmanlike costumer that distills Blighty’s long battle for the abolition of slavery and the personalities behind landmark antislavery legislation into a tidy story of conscience and perseverance. . . .

Cautioning at the tail of the closing credit crawl that certain characters and incidents have been combined or invented to move the drama along, pic’s convenient tale of good vs. evil nevertheless makes its forceful point that Wilberforce’s youthful obsessiveness and unorthodox methods aided tremendously in ending British transport of slaves and accelerating the demise of the slave trade. In fact, the actual Slavery Abolition Act wasn’t passed until 1833, a month after Wilberforce’s death.

Pic reflects the no-nonsense storytelling skills of prolific helmer Michael Apted, whose career-long mix of feature and docu work holds him in good stead once more. Cast is uniformly fine, with Gruffudd setting the pace via a sincere and well-modulated perf and Hinds appropriately dastardly as the sneering Tarlton.

In the three scenes in which he appears, Albert Finney is mesmerizing as the remorseful former slave trader and Wilberforce adviser John Newton, while Michael Gambon gets the bulk of pic’s few lighter lines as Lord Charles Fox, whose dramatic defection to the antislavery movement is seen to break up the logjam within Parliament.

Tech package is pro, with CGI discretely broadening the horizons in certain long shots to cement the period illusion. . . .

Meanwhile, Kirk Honeycutt of the Hollywood Reporter doesn’t like it, and writes:

The dullness of virtue infuses this historical story of the British MP who spent his life fighting the appalling institution of slavery in the British Empire. This is about as safe a historical/political topic as a filmmaker can tackle, where right and wrong are as clear as day. The only cause for wonder for a modern-day viewer is the speciousness and cynicism of the arguments made in favor of the institution in those days. . . .

Screenwriter Steven Knight chooses a strange attack on his subject. In 1797, William, bitter and quite ill, retreats to the country home of dear friends to recuperate his health after many failed abolitionist campaigns in Parliament. His hosts believe love will cure his illness, so they fix him up with a local, marriageable lass named Barbara Spooner (Romola Garai).

Although reluctant to woo, Barbara is such as an ardent follower of William, she begs him to recount every moment of his campaigns up to present day, even though she must know the stories as well as he does. So in flashback, the movie bears witness to his years of struggle to outlaw the slave trade, largely resisted because British colonial sugar cane interests were totally dependent on slave labor. . . .

At the end of these tales of frustration, the love cure works. The couple swiftly marries then rushes to London, where the slave trade is largely undone through a clever parliamentary maneuver. It is officially banned for good several sessions later. And that, the movie concludes, ends slavery. Which is complete nonsense because it continues unabated in the New World until the Civil War ends it and, tragically, slavery still exists all over the world today.

The movie contains lengthy parliamentary debates over slavery, though you wonder to what purpose because that argument was settled long ago. The political maneuverings are of some historical interest, but modern relevancy is hard to find.

Gruffudd is vigorous and impassioned — especially for a sick man — but Wilberforce never comes to life. Why he made the abolitionist movement his life’s calling is only vaguely hinted at given that these were “unsound” ideals for an MP in that era.

So, too, with Garai’s infatuated Barbara: Her fate is so determined the moment she appears onscreen, that there is little life or mystery to her character. The good people in this movie are just too good, without flaws or misgivings.

Apted’s crew does a decent job establishing period details, but this also never comes to life. These are sets and costumes to be struck at the end of the workday.

Meanwhile, Reuters briefly quotes director Michael Apted at the end of an article on the end of the Toronto festival:

Apted, best known for films such as “Coal Miner’s Daughter” and the groundbreaking “7 Up” documentary series, said he was drawn to the story of Wilberforce as an example of political debate that was able to effect change.

“In a gentle way, this is an attempt to kind of try and restore a little faith in political action,” Apted, 65, told Reuters in an interview.

The film — which now has a blog of its own, at producer Patricia Heaton’s website — will come to regular theatres in February.

September 17, 2006 Mel and Michael, together -- almost!
Recent Comments
0 | Leave a Comment
Browse Our Archives
get the latest updates from
FilmChat
and the Patheos
Entertainment
Channel
POPULAR AT PATHEOS Entertainment
1