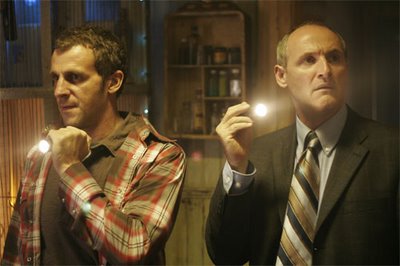 Yesterday’s Variety on the success of Bon Cop, Bad Cop:

The Montreal-shot bilingual action-comedy “Bon Cop Bad Cop” has become the second highest-grossing Quebec-made pic ever in its home province, with a box office haul of C$8.7 million ($7.8 million) after six weeks in Quebec cinemas.

Unlike those two previous Quebec films, however, “Bon Cop” is scoring significant sales in English Canada, where it has so far grossed $1 million.

Directed by Montreal helmer Eric Canuel, “Bon Cop” is the first major Canadian release shot in both of the country’s official languages, with the dialogue split almost evenly between French and English. . . .

Already there are serious discussions about making a sequel, and Tierney said three U.S. companies have expressed interest in remaking the film. Tierney admitted the notion of an American remake is an ironic twist, as Huard said his original concept was to do a Canadian bilingual take on Hollywood action-comedies like “Lethal Weapon” and “48 Hours.”

I’m not quite sure what to make of the figures reported here. Is the article saying that the film has grossed $8.7 million in Quebec plus $1 million in the rest of Canada? Or does the larger figure cover the entire country? And how does this square with the past weekend‘s box-office figures, as reported by this site, which states that the film has grossed only $7.1 million to date?

As for a sequel … shudder. Is it possible the first film missed any central-Canadian clichés? Will the sequel be even sillier?

And what could an American studio possibly do with this story? Ron Howard could remake Louis 19, le roi des ondes (1994) as EdTV (1999; my review) because there was nothing all that Quebec-specific about that particular story. But this?

SEP 25 UPDATE: And now, it is Quebec’s top-grossing film ever.

OCT 10 UPDATE: And now, it is Canada’s top-grossing film ever.

September 12, 2006 Peter Jackson options dragon tale (not Hobbit)
Recent Comments
2 Comments | Leave a Comment
"I have neither noticed that much. I recenty read a leadership book inspired from Cyrus ..."
Hamid Mortazavi Cyrus the Great — a Persian ..."
""AD" stands for "Anno Domini", a Latin expression meaning "In the Year of Our Lord".So ..."
Peter T Chattaway The Chosen — season one, episode ..."
"Why does it say at the start of episode 3 that it takes place 26 ..."
Desiree Chamberlain The Chosen — season one, episode ..."
"What about Hellboy, The Grudge, Ghoulies, and Anaconda?"
45th Spiderbob Group VGCP When R-rated franchises go PG-13 …
Browse Our Archives
get the latest updates from
FilmChat
and the Patheos
Entertainment
Channel
POPULAR AT PATHEOS Entertainment
1