Who is the youngest Mary of them all?

Who is the youngest Mary of them all? September 15, 2006 Peter T. Chattaway 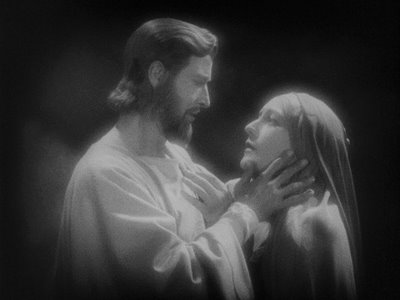 In anticipation of The Nativity Story, I’ve been going back and re-visiting earlier films about Jesus and Mary and making notes on how Mary, in particular, has been depicted.

I might say more about these cinematic portrayals of Mary later, but for now, I just want to focus on one facet of them — namely, her age, or rather, the ages of the actresses who have played her. And I have posted the above image, from Cecil B. DeMille’s The King of Kings (1927), because it helps to illustrate the following point that I made in my review of the Criterion DVD:

Some aspects of the film seem more dated now. H. B. Warner’s performance as Jesus has its merits, but lends itself all too well to the wimpy “meek and mild” image that more recent filmmakers have tried to undo. In addition, Warner was 51 when the film came out, and must rank as one of the oldest actors to have ever played the Savior onscreen; presumably his age was meant to communicate Jesus’ wisdom and authority. In contrast, the Virgin Mary is played by Dorothy Cumming, who was only 28; presumably her youth, and her nun-like attire, were meant as a nod to Catholic beliefs about Mary’s incorruptibility.

Incidentally, there is no Nativity sequence in DeMille’s film, so this was not one of those cases where an actress was required to play both a “young Mary” and then an “old Mary”.

I got curious about the actresses in the other films I’ve been watching, and while a few of their birthdates are not available at the IMDB, I was able to dig up the info for most. What follows are the titles of each film, followed by its release date, the actress’s name, her age at the time of the film’s release, her birthdate, and whether she played the Young Mary, Old Mary, or both:

FWIW, some noteworthy Jesus films don’t show up in this list because they left Mary out of the picture completely, e.g. Jesus Christ Superstar (1973) and Godspell (1973), both of which were more concerned with the parallels between Jesus’ disciples and the hippies of their day; or because they don’t quite fit on a list like this, e.g. The Miracle Maker (2000), which is an animated film and thus requires an actress to provide only the voice of Mary.

September 16, 2006 Jesus Camp -- the longer interview's up!
Recent Comments
4 Comments | Leave a Comment
Browse Our Archives
get the latest updates from
FilmChat
and the Patheos
Entertainment
Channel
POPULAR AT PATHEOS Entertainment
1