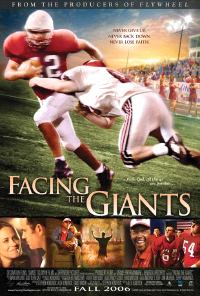 THESE ARE interesting times for Christian film buffs. Nearly three years have passed since The Passion of the Christ rode a wave of controversy to the top of the box office, and studios have been looking for a way to replicate that success ever since.

The key thing about The Passion may be that it was self-financed. Unlike, say, the big-screen version of The Lion, the Witch and the Wardrobe — which toned down the book’s Christian elements to appeal to as wide an audience as possible — Mel Gibson’s movie was bold and uncompromising, all because he paid for it himself.

No one expects the next big Christian movie to be anywhere near that big a hit. But increasingly, secular studios are coming to realize that the best way to sell movies to Christians may be to pick up the movies that Christians are already making.

Take the case of Facing the Giants, which concerns a Christian football coach with an infertility problem. Produced in part by a Baptist church in Georgia, on a miniscule budget of $100,000, the film was picked up by Provident Films — the Christian arm of Sony Pictures, the same studio that raked in big bucks worldwide this summer with The Da Vinci Code — and it has grossed $6 million in its first month.

Another major studio, 20th Century Fox, announced in late September the creation of a new boutique label called FoxFaith. Through this label, Fox will not only distribute videos, but, in conjunction with an independent distributor called The Bigger Picture, it will also promote the occasional feature film as well.

The first film released under the new arrangement, Love’s Abiding Joy, even opened in a few Canadian theatres (including one in Surrey) on the same day that it came out in the States. Ordinarily, independent Christian films don’t come to Canada at all; and if they do, they usually come weeks or months after they open in the States — even when the films are produced by Canadian companies, as was the case with Left Behind and The Gospel of John. So this was certainly a milestone of sorts.

Love’s Abiding Joy was made for the straight-to-video market, and looks it; so it’s no surprise it did very little business at the box office. But the second FoxFaith film, an epic adaptation of the Book of Esther called One Night with the King, has earned more than $10 million after only three weeks in release.

One Night with the King was produced by Matthew Crouch (son of TBN founders Paul and Jan Crouch) on a budget of $20 million, and could easily turn out to be the second biggest evangelical hit of all time, after Jonah: A VeggieTales Movie (which grossed more than $25 million four years ago). But like a lot of evangelical movies, it suffers from clunky dialogue, cutesy humour and tacky plot twists.

The trick now is to see if Christians will make daring, challenging movies with some degree of quality. Love’s Abiding Joy and One Night with the King have their good points, but they play things absurdly ‘safe’; imagine, if you will, a Persian king who had a harem but never did with his concubines what the Bible says he did.

And while I have not seen Facing the Giants, the reviews by my American colleagues have been pretty brutal. Barbara Nicolosi, former head of the Act One screenwriting program, called its message “dangerous” — and warned that it may herald a wave of “fantasy movies for Christians, made by Christians and paid for by Christians.”

The CCM market made it possible for talented Christians like Steve Taylor and Terry Scott Taylor to carve out their own niche audiences as musicians, and it may be that talented, prophetic Christians will take advantage of these new opportunities, too.

Indeed, one of the best Christian films in recent memory was The Second Chance — directed by Steve Taylor, and distributed on video by Sony’s Provident label.

Speaking of Christians in Hollywood, two rather prominent believers recently took on a couple of fairly major — and even daunting — assignments.

David L. Cunningham, son of YWAM co-founders Loren and Darlene Cunningham, is the director of several recent films and TV movies — including To End all Wars, The Path to 9/11 and After… (the last of which he co-wrote with Abbotsford resident and occasional BCCN contributor Kevin Miller). He will direct a big-budget adaptation of Susan Cooper’s fantasy novel, The Dark Is Rising, for Fox and Walden Media.

Meanwhile, Randall Wallace — writer of Braveheart and Pearl Harbor, and director of The Man in the Iron Mask and We Were Soldiers — has been hired to write the screenplay for Atlas Shrugged, an adaptation of the novel by atheist Ayn Rand.

Wallace told Variety magazine he first encountered Rand’s book last year, when he and his son made a deal to read each other’s favorite books. Wallace gave his son C.S. Lewis’ Mere Christianity, while his son picked Atlas Shrugged — and the elder Wallace said he found Rand’s book “original and provocative.”

— A version of this column was first published in BC Christian News.

October 29, 2006
Russian Fantastiks come to the Cinematheque
Next Post

October 30, 2006 Canadian box-office stats -- October 29
Recent Comments
0 | Leave a Comment
Browse Our Archives
get the latest from
FilmChat
Sign up for our newsletter
POPULAR AT PATHEOS Entertainment
1

Entertainment
Mel Gibson's Passion sequel will jump back and...
FilmChat