After a ten-year hiatus, Mel Gibson is back in the director’s chair — and, fittingly for the Oscar-winning director of Braveheart and The Passion of the Christ, his next film is a war movie with a potentially strong faith element.

Hacksaw Ridge tells the true story of Desmond Doss, a Seventh-Day Adventist who refused to carry a gun and served instead as a medic during World War II. He became the first conscientious objector to win the Congressional Medal of Honor after he saved 75 men during the battle of Okinawa without once using a firearm.

I haven’t seen the film, so I obviously don’t know exactly how it will tell this story, but I have a hunch that this could turn out to be the “faith-based World War II movie” that many people hoped Unbroken would be a couple years ago.

That film had a big first weekend partly because of intense evangelical interest in the film’s protagonist Louis Zamperini, who became a Christian after the war and learned to forgive his Japanese captors — but many viewers were disappointed that the film relegated the Christian part of Zamperini’s life to the closing title cards.

Hacksaw Ridge, on the other hand, could put its protagonist’s faith front-and-centre from start to finish — and the film was not only directed by Gibson, whose “faith-based” bona fides are well-known, but it was also co-written by Randall Wallace, an openly Christian filmmaker who wrote and directed Heaven Is for Real.

In any case, we’ll see how it all turns out when the film opens November 4.

For now, here is the first poster for the film: 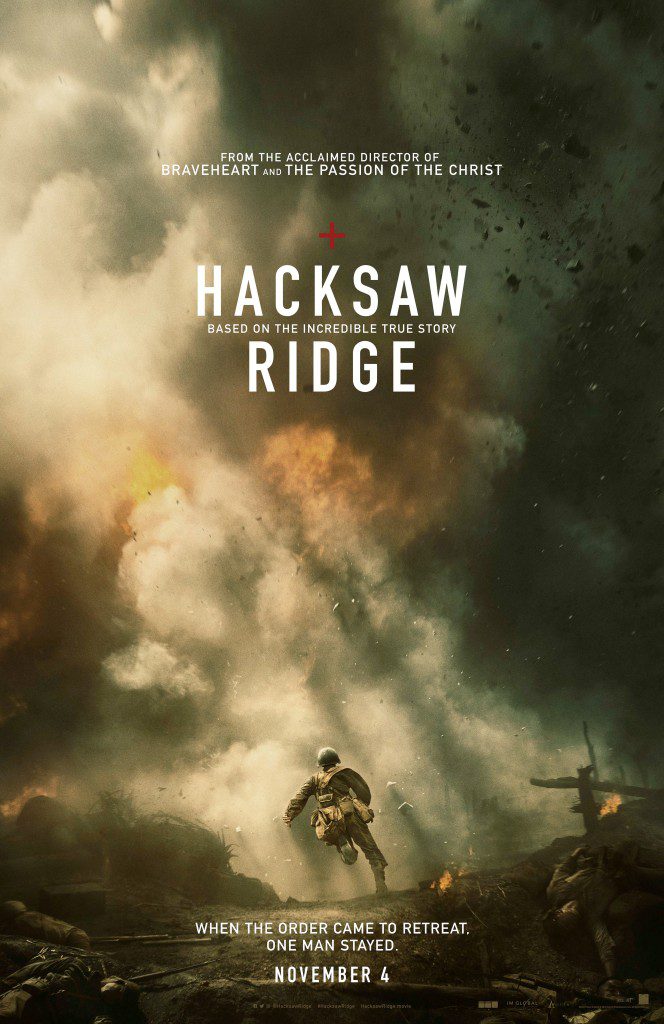 One other interesting note: Hacksaw Ridge stars Andrew Garfield as Doss, and Garfield will soon be seen in Martin Scorsese’s Silence, which is also a prestigious faith-inflected period piece set in Japan.

June 29, 2016
A virtual-reality Jesus movie is coming this Christmas from the makers of Left Behind and The Passion of the Christ
Next Post

July 1, 2016 Watch: McCoy gives Spock a word of advice about "Earth girls" in the first clip from Star Trek Beyond
Recent Comments
0 | Leave a Comment
""AD" stands for "Anno Domini", a Latin expression meaning "In the Year of Our Lord".So ..."
Peter T Chattaway The Chosen — season one, episode ..."
"Why does it say at the start of episode 3 that it takes place 26 ..."
Desiree Chamberlain The Chosen — season one, episode ..."
"What about Hellboy, The Grudge, Ghoulies, and Anaconda?"
45th Spiderbob Group VGCP When R-rated franchises go PG-13 …
"Not yet, but I might do something like that once Season 2 is complete."
Peter T Chattaway The Chosen — season one scripture ..."
Browse Our Archives
get the latest from
FilmChat
Sign up for our newsletter
POPULAR AT PATHEOS Entertainment
1