Between Evan Almighty, the upcoming More Silly Symphonies two-disc set, Jim Hill’s post today on Disney’s penchant for recycling its ideas, and a couple other things, I had Noah’s Ark and the Disney cartoons thereof on the brain today.

First, stubborn animals are scared into boarding the Ark by sudden lightning bolts that come from behind: 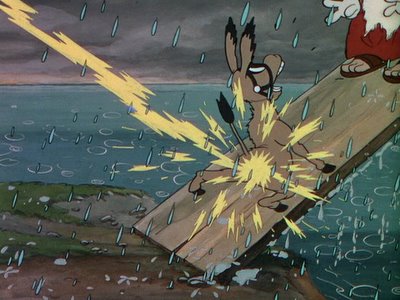 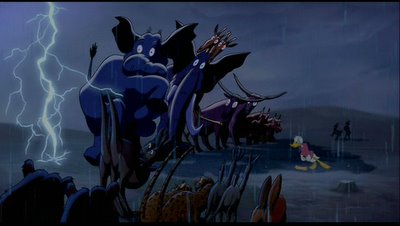 Second, after the Ark lands on dry ground, the animals get off the boat … and the rabbits, we discover, have multiplied: 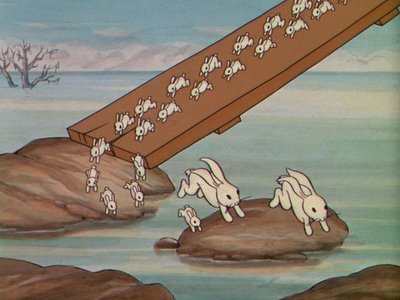 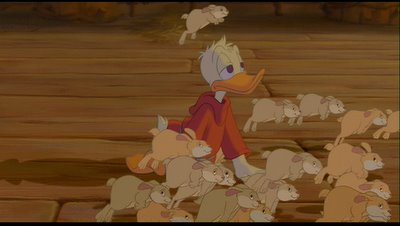 Beyond these similarities, there are some noteworthy differences.

The most obvious difference is musical. The 1933 film is a “Silly Symphony” and has all the perky theatricality you’d expect — characters introducing themselves to the audience in song, hints of Negro spirituals a la Green Pastures (1936), etc. — whereas the 1999 film was produced for a collection of cartoons set to classical music and is thus based on Elgar’s ‘Pomp and Circumstance’.

The cartoons also make slightly different use of the biblical source material. The 1933 film features all eight members of Noah’s family and introduces all the menfolk by name, whereas the 1999 film features only Noah himself, with Donald and Daisy apparently serving as his assistants. On the other hand, the 1933 film treats the arrival of the dove with the olive branch almost as a surprise (“Here comes a dove!” sing the characters — note: “a” dove, not “the” dove), whereas the 1999 film shows Donald deliberately sending the dove out to look for land — and it shows him tearing the dove away from its female companion in order to do so.

Then there are the differences in how the cartoons depict animals. The 1933 film takes a special interest in depicting animals as a primitive form of machinery, not unlike what we would eventually see on The Flintstones (the animals themselves are involved in building the ark, dividing logs into planks and making holes for the pegs and so on), whereas the 1999 film is marked by a more subversive interest in carnivorous behaviour (two canines are moving in on a trapped rabbit when they all hear Noah’s call and head for the Ark; a snake on the Ark is on the verge of eating two trapped mice when one of Donald’s mishaps gets in the way).

Finally, there is the question of who, or what, got left off the Ark. The 1933 film shows two skunks being left behind and swimming to the Ark for safety after Noah’s three sons withdraw the entry ramp, which might make you wonder whether Noah’s family fully appreciated that they were supposed to save two of every animal, whereas the only animals left behind in the 1999 version are the mythical creatures (unicorns, dragons, etc.) who mock the Ark and its animals and presumably have only themselves to blame for going extinct and thus surviving only in the human imagination.

Not surprisingly, both cartoons are mum on whether any people were left off the Ark when the flood came — though the 1999 film does revolve around a gimmick to the effect that Donald and Daisy each come to believe that the other perished in the water, until they are reunited quite accidentally at the end of the film. So the possibility that people might have died is at least raised there.

October 10, 2006 I still hate bilingual packaging.
Recent Comments
1 Comment | Leave a Comment
"I have neither noticed that much. I recenty read a leadership book inspired from Cyrus ..."
Hamid Mortazavi Cyrus the Great — a Persian ..."
""AD" stands for "Anno Domini", a Latin expression meaning "In the Year of Our Lord".So ..."
Peter T Chattaway The Chosen — season one, episode ..."
"Why does it say at the start of episode 3 that it takes place 26 ..."
Desiree Chamberlain The Chosen — season one, episode ..."
"What about Hellboy, The Grudge, Ghoulies, and Anaconda?"
45th Spiderbob Group VGCP When R-rated franchises go PG-13 …
Browse Our Archives
get the latest updates from
FilmChat
and the Patheos
Entertainment
Channel
POPULAR AT PATHEOS Entertainment
1