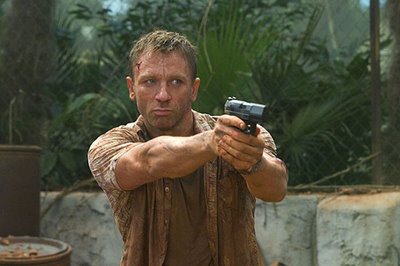 Just got home from seeing Casino Royale with my dad. Loved it. It isn’t perfect, but it’s a vast improvement over previous James Bond films, and it was interesting to see how they balanced the deeper psychological elements of the novel with the action setpieces that audiences have come to expect ever since the Roger Moore era — indeed, ever since the late Sean Connery era.

And hoo-boy, what setpieces. Even when things threaten to get big and bombastic, the actual fights themselves retain a certain cramped, close-quarters quality; it is here, and not in the sex scenes, that the real physical intimacy, as it were, is to be found. It’s infinitely preferable to the double-machine-gun-toting commando that Pierce Brosnan played — and how odd to think that Brosnan’s first foray into this franchise, GoldenEye (1995), was directed by the same guy who directed this film.

It occurred to my dad and me the other day that it has been 25 years since he took me to my first James Bond movie, For Your Eyes Only (1981), on an overnight trip to the States — and it occurred to us tonight that he was almost 36 at the time, which just happens to be the age that I am now. It’s bizarre to think that he had an 11-year-old son, and three other children, when he was my age; my own kids are only 9-and-a-half months old now.

I remember going to an A&W; with my dad — who wanted to take me to Black Angus, but I was a kid and thought going to a drive-in restaurant was way more cool — and discussing what movie we should see that night. It was either For Your Eyes Only or Raiders of the Lost Ark (1981), and I opted for the James Bond film because it was late at night and the Indiana Jones film sounded scarier and I didn’t want to have nightmares, etc.

(Side note: As I recall, the American newspaper ad said Raiders had “explicit violence”, while the Vancouver newspaper ads said it had “gory violence”; and around this time, I saw a Wizard of Id cartoon in the paper where a soldier responds to the king’s request by asking, “Could you be more explicit,” and the king replies, “Do what I say or I’ll bite your kneecaps off,” so for some time after that, I thought “explicit” and “gory” meant the exact same thing.)

I remember going to the theatre and seeing a lot of teenagers there with their dates, and thinking, “One day soon, I’ll be going to movies with girls, too.” (Tonight, on the other hand, I found myself shushing a couple of rude teens who walked into the theatre right at the film’s emotional climax and began yammering amongst themselves.) And I remember my dad saying something like “Good for him” when Bond turns down the advances of the ice skater played by Lynn-Holly Johnson; as a complete newbie to the series, I had no idea that it was so rare for Bond to say no to sex.

I also remember how my dad used to explain to me, on the drives home from this and other 1980s James Bond movies, that sex in real life was not like the sex in these films. It occurred to me tonight that the last James Bond film, Die Another Day (2002), came out four years ago — two months before I had met or even heard of the woman who is now my wife. So watching this film was a little different from watching the others, on that level.

Incidentally, the day after we saw For Your Eyes Only, my dad and I headed home, and he pulled over at another theatre that we happened to pass by — and he took me to see a matinee of Raiders. So I got to see both films on that weekend trip after all!

Anyway, if I’m going through this kind of nostalgia right now, I can only imagine what my dad might be going through; after all, the very first film in this franchise, Dr. No (1962), premiered when he was only 16 years old! Did any movie franchises start in 1986 or 1987 that are still kicking around? I can’t think of any.