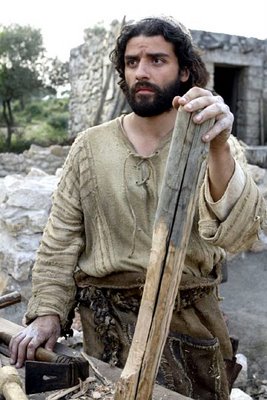 To follow up my first junket report on The Nativity Story, here are some “bonus quotes” from the roundtable interview with Oscar Isaac, the actor who plays Joseph. It began like so:

PTC: When your name was first announced as the one playing Joseph, I tried to look it up —

PTC: Yeah, exactly. So of all the things to make your big mainstream break, it’s this very iconic role. How did you approach that?

OI: You know, I’d like to say that I felt a great responsibility or something, but I actually didn’t, maybe dangerously so. I knew that– First of all, Mike Rich had written such a reverential film already, that I felt for me, the key was to make him as human as possible, to approach him like any other character. That’s how I would do him service, by saying, “How is he real, how does he feel about this, how is he different from me, how is he the same as me?” That was the key, to make him flesh and blood.

Later, Isaac said some fascinating things about the way this film portrays the relationship between Mary and Joseph:

PTC: The question of the relationship of Joseph and Mary. You say he’s completely in love with her. I’m struck by how– There were a couple of TV-movies about the Nativity made in the ’70s, they go for that teen romance thing —

PTC: — and I love the fact that this film plays it more the way I imagine it would have been back then, with the sort of arranged marriage, the traditional approach, Joseph interacting with the parents —

OI: You know, that actually came from me reading that book [The Life and Times of the Messiah, given to Isaac by his father; Isaac didn’t mention the author’s name, but he said it was written in the 1800s, and based on what he says next, it might be this book]. The betrothal, him with the cup? That wasn’t in the script originally. I don’t take away anything from Mike Rich, who did a fantastic job of fleshing them out. That was one of those moments where I found an actual betrothal ceremony, possibly ancient one. It was tough because, with the Jewish advisor, there is no real record of what they would have been saying, so there’s a little bit of leeway, but there was a possible one.

PTC: Because the question I was going to ask was to what degree Joseph’s attraction to Mary is emotional. I mean, he’s bought the donkey back, and he knows that the soldiers could take Mary away, so to what degree– He’s drawn to Mary because of her virtue, but is he also trying to protect her for her father’s sake? He obviously does feel for her, but it didn’t seem to me that he was necessarily driven by romantic passion.

OI: I think, it’s tough, because it’s not just romantic passion, because I think romantic passion isn’t necessarily selfless, you know? I think romantic passion is wanting a little something in return. It is a love, he looks at her and he could never stone her even though he wants to. It’s not that he doesn’t want to, or he doesn’t have those feelings, but he works through them. I think that’s what makes him a remarkable character, is that you see him wanting to do those things. It was very difficult for me to stay in the room, you know. In rehearsal, I just couldn’t stay in the room, I would go out and have to kick things, you know, and I had to basically find out why does he stay. And again, the idea of love — you can say that’s a love that comes from God. That’s that Corinthians love — you know, from Corinthians — that seeks not itself in return; it’s meek, it’s humble. As a young man, what I had to connect with, was that feeling of love for someone.

In response to a question by someone else, Isaac talked about the unique psychological situation of his character:

OI: In theological terms, it’s really interesting, because it forces you to think of Joseph in a different way, to really see that he was an integral part of this happening — so much so that it almost didn’t, and if he had made a couple of different choices, things could have turned out very differently! I’m sure God would have found a way, but he had a lot of responsibility. And also, just a very interesting psychological character study idea of, how does a man share the woman he loves with God? I mean, that’s what he has to do. He loves God with all his heart, and he loves this woman selflessly, and then he chooses her, so he can’t have the family that he wanted to, at least not the way he knows it’s going to be. He can’t just live in this little house that he was building in Nazareth. He has to literally share this woman. So how do you wrap your mind around that as a man?

The interview turned to a scene in which a stranger unwittingly rubs in Joseph’s face the fact that the child he will be raising is not his own, and even Mary’s efforts to console him only go so far:

OI: That’s the most important thing, that it cost something. You read the story, and you don’t really get that it cost these people something. It cost them something to sacrifice all this, to say, “I’m going to stay by your side.” And just because God came to him in a dream, it didn’t mean that he still was thinking, “I hope that I didn’t just make that up. I hope that I heard God correctly.” And I think at that moment when he asks for a sign, it’s about, “I don’t know, have I just brought this woman out here for nothing? Is this woman even really telling me–?” I think he constantly — that’s a great question — I think he constantly, even up until the end, is grappling with his feelings.

One of us interviewers pointed out that Mary, Zechariah, and even the shepherds — complete strangers — got direct visitations from the angels, whereas Joseph only got a dream. Isaac laughed:

OI: He’s required to make an even stronger leap of faith — which just adds to his dilemma, man! Poor guy!

Finally, Isaac also made an interesting comment about a couple of the scenes in this film that foreshadow later events in the gospels:

OI: Yeah, the Temple. The moment in the Temple. Exactly, exactly. There’s a couple other little bits that happen where you can kind of say, “Yeah, maybe Joseph did influence Jesus’ life.” You know, the way that he does act with such humility. If you think about the scene in the house with Mary, when he finds out she’s pregnant, it’s almost like the scene with Mary Magdalene, how he treats her with love and humility. It’s interesting that there’s these little seeds throughout the film.

That about wraps it up for Isaac, but I might post “bonus quotes” from some of the other interviewees at the junket. Stay tuned!

November 26, 2006 Gandalf could have made Connery a fortune
Recent Comments
3 Comments | Leave a Comment
Browse Our Archives
get the latest updates from
FilmChat
and the Patheos
Entertainment
Channel
POPULAR AT PATHEOS Entertainment
1