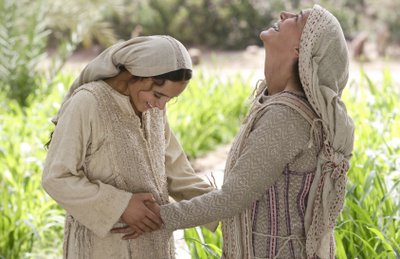 It’s time for more extended and deleted quotes from the Nativity Story junket! The interviewee this time is Shohreh Aghdashloo, who plays Elizabeth, the mother of John the Baptist.

Portions of this roundtable interview already appeared in my first junket report, and an earlier post to this blog sprung off of a comment she made about the Iranian mini-series Saint Mary.

Asked how she sees the relationship between Mary and Elizabeth, Aghdashloo responded:

SA: The first thing I learned about Elizabeth in the Gospel of Luke was that when Mary is blessed and she wants to share her secret with someone, she takes her safe haven at Elizabeth’s. And Elizabeth, and the child that she is carrying, they both know that she is coming with a secret to tell them. And when I read the screenplay — as an actor, you look for clues here and there, to be able to find out what kind of relationship they had — and I loved the fact that Elizabeth called Mary “child” — “Oh, child” — which told me that the feelings this woman has for Mary is the feelings that she would have had for her own daughter. In other words, although Elizabeth hasn’t had a child, and she is still faithful, she feels that Mary is her child. And to me, the real mother of Mary is Elizabeth. Elizabeth is the true mother of Mary. Because if the child goes to someone and confesses and share a secret, it means that they have a great bond, and what difference does it make whether Elizabeth is the true mother of Mary or not? I believe this is how she thought, and how she greeted Mary.

Asked about Elizabeth’s relationship with Zechariah — especially given the shocking development that he could not speak, after his encounter with Gabriel in the Temple — she said:

SA: Indeed. But we have to remember that she is a woman of virtue and faith. That is what amazes me about her. Despite the fact that God has not been merciful upon her and given her a baby when she was younger and she could produce more babies, but still, and then obviously her husband cannot talk to her, but she does not let go of her faith, and that amazes me, that makes me respect her much more, because no matter what — despite all these happenings in her life — she still remains a pious woman. And it’s not easy, we’ve all been tested in our life, and we know how it works. She just has faith and belief in God and just keep on going. And I believe that she must have loved him, she must have loved him, because the way that she talks about him, and is worried about him, and takes care of him — and when they realize that in this oasis that they both live in, they literally have nobody else but one another — so she’s just living with him and loving him, the way she worships and adores God.

Incidentally, a point that this film could have made but didn’t — though I believe it turns up in the TV-movie Mary and Joseph: A Story of Faith (1979) — is that Zechariah must have deeply loved Elizabeth, too. Under the laws and customs of that time, Zechariah would have been fully justified in divorcing Elizabeth and marrying a woman who might bear him a child — but he didn’t.

Moving on: Asked how she thought modern audiences might respond to the depiction of miracles in this film, Aghdashloo said:

SA: If the audience allows himself to let the film empower the imagination — if you’re not biased, if you leave your ego behind the door and come in and watch this film without any sort of prejudgment or conception — just watch this simple yet the most ambiguous story of mankind, and allow this to empower your imagination, if you do not believe in miracles. Just allow this to empower your imagination. Another thing that happens with all these miracles in the film is that they might not affect the audience right away, but it does when they leave, and that’s what, to my belief, that’s what a good film should do. It will make them ask questions. It will bring about questions. And that’s a mission of a good film, not to necessarily revolutionize your heart, but make you ask questions.

And, after talking about how she found herself modelling her interpretation of Elizabeth on memories of her own grandmother:

SA: Now I can bring the two women together regardless of the background or nationality or colour of the hair — I can just combine them together and try to stay as truthfully as possible to this character, because there was no other way to play her. Every morning, I was meditating, asking God to take away all the fundamental pillars that Shakespeare used in his plays — anger, rage, betrayal. God, take all these away; empty my head of all of these, so I can come up with a pair of eyes that are always smiling, with no expectation and with an unconditional love, that these two women, the one that I got to experience in real life and the one that I’m reading about, that I can portray these two women and I can do it justice, too, in portraying that.

Stay tuned for more “bonus quotes” in the next few days!

November 27, 2006 Every James Bond theme singer is still alive.
Recent Comments
0 | Leave a Comment
"Whoever wrote this article called Mary a virgin. She was only a virgin till after ..."
Ronnette Harvey The latest attempt to film all ..."
"In addition to this explanation of why "Paul says he can’t tell the Roman Christians ..."
PaulDT Paul, Apostle of Christ: a scene ..."
"Outstanding outline and identification of references and sources as well as background. Thank you so ..."
PaulDT Paul, Apostle of Christ: a scene ..."
"" So now, basically, the Magi are just a substitute for Santa Claus." <- Well... ..."
The 3 Wise Men — not ..."
Browse Our Archives
Follow Us!