Disney staff — out with the old, in with the new? 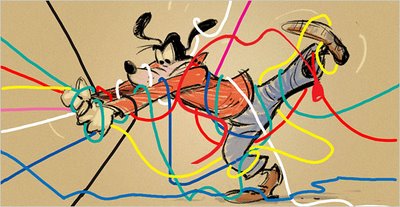 In one corner, today’s Variety:

Disney is laying off about 160 employees, or 20% of the total staff, from its feature animation unit. . . .

Cuts come as production is winding up on “Meet the Robinsons,” which will be released in June. A spokesman said that “the management team at Walt Disney Animation has determined that each film will dictate its own appropriate production schedule,” indicating that it will keep fewer animators on as permanent employees moving from film to film. . . .

In the other corner, today’s New York Times:

MOVIEGOERS who have become inured to pre-show car ads and trivia quizzes may soon get something old enough to seem new: cartoon shorts. . . .

“The impetus comes from John Lasseter, who takes the idea from Walt Disney and 100 years of film history,” said Don Hahn, producer of “The Lion King” and “The Little Match Girl,” in a recent interview at his studio office. “Shorts have always been a wellspring of techniques, ideas and young talent. It’s exactly what Walt did, because it’s a new studio now, with new talent coming up — as it should. I think the shorts program can really grow this studio as it grew Pixar, as it grew Walt’s studio.” . . .

Chuck Williams, a veteran story artist who will produce the new films for Disney, said they do not have to become a profit center in order to perform a real commercial function.

“They allow you to develop new talent,” Mr. Williams said in an interview at the Disney studios. “Shorts are your farm team, where the new directors and art directors are going to come from. Instead of taking a chance on an $80 million feature with a first-time director, art director or head of story, you can spend a fraction of that on a short and see what they can do.” . . .

Make of all that what you will.

December 1, 2006
John the Baptist coming to a theatre near you?
Next Post

December 2, 2006 The Nativity Story places 4th on Friday
Recent Comments
1 Comment | Leave a Comment
"I have neither noticed that much. I recenty read a leadership book inspired from Cyrus ..."
Hamid Mortazavi Cyrus the Great — a Persian ..."
""AD" stands for "Anno Domini", a Latin expression meaning "In the Year of Our Lord".So ..."
Peter T Chattaway The Chosen — season one, episode ..."
"Why does it say at the start of episode 3 that it takes place 26 ..."
Desiree Chamberlain The Chosen — season one, episode ..."
"What about Hellboy, The Grudge, Ghoulies, and Anaconda?"
45th Spiderbob Group VGCP When R-rated franchises go PG-13 …
Browse Our Archives
get the latest updates from
FilmChat
and the Patheos
Entertainment
Channel
POPULAR AT PATHEOS Entertainment
1