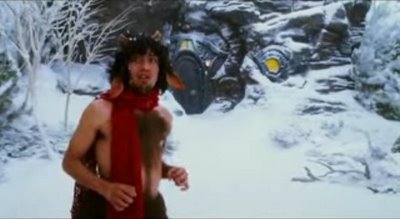 I just got a plot synopsis for Epic Movie, the looks-so-lame movie parody that comes out January 26. The synopsis alludes to a few films that do not come up in the trailer now playing in theatres:

The twisted minds of two of the six writers of “Scary Movie” tackle the biggest mega-blockbusters of all time in EPIC MOVIE. The story centers on four not-so-young orphans: one raised by a curator at the Louvre (where an albino assassin lurks), another a refugee from Mexican “libre” wrestling, the third a recent victim of snakes on her plane, and the fourth a “normal” resident of a mutant “X”-community. The hapless quartet visits a chocolate factory, where they stumble into an enchanted wardrobe that transports them to the land of Gnarnia (with a “G”). There they meet a flamboyant pirate captain and earnest students of wizardry – and join forces with, among others, a wise-but-horny lion to defeat the evil White Bitch of Gnarnia.

The lion himself is not shown in the trailer or in any other promotional items that I’ve seen, and I am mildly curious to see what sort of reaction he gets, given that many Christians are inclined to regard Aslan not as a fictitious character but as Jesus himself. It could almost be fun to see this film get attacked for “blasphemy” or some such thing — but frankly, I’d be surprised if the film, which looks so so dumb, got any attention at all.

December 13, 2006 Newsbites: Depp! Crusade! Del Toro! Grace!
Recent Comments
3 Comments | Leave a Comment
"I have neither noticed that much. I recenty read a leadership book inspired from Cyrus ..."
Hamid Mortazavi Cyrus the Great — a Persian ..."
""AD" stands for "Anno Domini", a Latin expression meaning "In the Year of Our Lord".So ..."
Peter T Chattaway The Chosen — season one, episode ..."
"Why does it say at the start of episode 3 that it takes place 26 ..."
Desiree Chamberlain The Chosen — season one, episode ..."
"What about Hellboy, The Grudge, Ghoulies, and Anaconda?"
45th Spiderbob Group VGCP When R-rated franchises go PG-13 …
Browse Our Archives
get the latest updates from
FilmChat
and the Patheos
Entertainment
Channel
POPULAR AT PATHEOS Entertainment
1