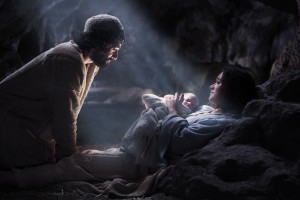 The Passion of The Christ was an independent movie, paid for entirely out of Mel Gibson’s pocket. The Prince of Egypt was an animated film that emphasized the common ground between Jews, Christians and Muslims. The Last Temptation of Christ was a low-budget art-house flick based on a heretical novel.

You would have to go back at least as far as King David, the mid-1980s box-office flop starring Richard Gere, to find another live-action movie produced by a major Hollywood studio and based directly on the Bible. And you would have to go back even further — to the bathrobe epics of the 1960s, at least — to find a mainstream biblical movie that was as blatantly Christian as The Nativity Story.

The film begins by quoting a prophecy, from the Book of Jeremiah, that is said to be troubling King Herod the Great (Ciarán Hinds). We then see Herod and his son Antipas (Alessandro Giuggioli) as they preside over the slaughter of the innocents in Bethlehem. By this point, Mychael Danna’s score has invoked the medieval hymn ‘O Come, O Come, Emmanuel,’ and scenes like these lay out the messianic hope by reminding us that Israel was indeed a “captive” in need of “ransoming.”

The movie then jumps back a year and then some to the beginning of the story, as the angel Gabriel (Alexander Siddig) appears to the priest Zechariah (Stanley Townsend) to tell him that his wife Elizabeth (Shohreh Aghdashloo) will have a son despite being well past the age of childbearing. Actually, Gabriel does not “appear” to Zechariah, as such; in one of the film’s several minor deviations from the Bible, Gabriel reveals only his voice to Zechariah — although, in a nifty special effect, the angel’s breath does seem to part the smoke that rises from the altar.

After this, we meet Mary (Keisha Castle-Hughes), a young girl who likes to play and laugh with her friends, but, like the teens of today, she has to cope with oh-so-serious parents — Joaquim (Shaun Toub) and Anna (Hiam Abbass, who really was born in Nazareth!) — who interrupt her fun to remind her to do her chores. (The film imagines that the ancestors of Christ made and sold cheese, which kind of gives a new spin to that old Monty Python line, “Blessed are the cheesemakers!”)

Here is where the tension between the film’s ancient and modern sensibilities is at its most obvious. Director Catherine Hardwicke spent years as a production designer before she got behind the camera, and her quest for authenticity is all over The Nativity Story‘s set design, especially when she throws in brief educational cutaway shots of peasants treading grapes or milking goats. But the film also gives Mary and her parents a taste of the intergenerational friction that was a major theme in Hardwicke’s previous directorial efforts, Thirteen and Lords of Dogtown — and at times, the interactions within Mary’s family feel a tad anachronistic.

There is also a tension of sorts in Mike Rich’s screenplay, which oscillates between the need to be faithful to the biblical text, on the one hand, and the freedom to create dramatically compelling characters and scenes, on the other.

While Rich trims out some of the dialogue that appears in the Bible, the parts that he keeps are presented almost exactly as written, yet these sections of the film — especially the Annunciation and the restoration of speech to Zechariah — feel rushed and anticlimactic, and are never quite woven into the rest of the drama. Compare the first scene between Mary and Elizabeth, which is straight out of the Gospel of Luke (minus the Magnificat), with their later conversations; it’s a little like watching Rosencrantz & Guildenstern Are Dead, in which the heroes use modern English until they wander into a scene from Hamlet and start talking all Shakespearean.

Of course, there isn’t all that much information about the Nativity in the Bible to begin with, so the filmmakers have plenty of room in which to create a thematic and dramatic arc for their story — and many of their ideas are quite interesting.

As Mary, Castle-Hughes is a bit of a blank, but there is still something compelling about her portrait of a child who finds herself thrust into a supremely adult role, first when her parents push her into an arranged marriage with Joseph (Oscar Isaac), and then when Gabriel tells her that she will bear the Son of God. The film even brings certain aspects of Terrence Malick’s The New World to mind, as Mary expresses her thoughts in voice-over and comes to appreciate her husband’s love for her.

But the real hero of this movie is Joseph, who, as played by Isaac, may be the most attractive embodiment of goodness and self-giving devotion that we have seen in a movie since Sean Astin played Sam in The Lord of the Rings. The trick to Isaac’s performance is that he lets us see Joseph’s darker side, even as he shows Joseph bravely keeping it under control. When a total stranger meets Joseph and the pregnant Mary, and remarks that there is nothing like seeing your own face in the face of your child, the pained look on Joseph’s face speaks volumes: he knows that with this child, at least, this is one aspect of fatherhood that he will never enjoy.

The depth and roundedness of Joseph’s character is also evident in the way he handles the crisis that emerges when Mary’s pregnancy becomes obvious to their neighbors, who shun Mary and her family as a result. Joseph sheds tears and wrestles with his own feelings of betrayal, but he also uses humor to buoy Mary’s spirits, particularly when the two of them leave Nazareth for Bethlehem.

The film also makes some interesting allusions to people and events from the future ministry of Jesus. As Mary and Joseph make the arduous journey to Bethlehem for the census, they buy one of their meals from a Galilean fisherman — might his name be Jonah (father of Peter and Andrew) or Zebedee (father of James and John)? — and as they pass by the Temple in Jerusalem, Joseph expresses his disgust with the hucksters there, the same hucksters that Jesus will chase out one day. Even better, when Herod’s troops attack the babies in Bethlehem, one soldier looks inside the cave where Jesus was born, and finds an empty manger — an image that brings to mind the empty clothes that Jesus’ disciples will one day find in his tomb.

For all the talk of “realism” and “authenticity” that has surrounded this film, it is still very much a family-friendly Christmas pageant, a Christmas crèche brought to theatrical life. While Mary does experience labor pains, the birth of Jesus is remarkably clean, with no placenta or umbilical cord in sight. The Magi, who trek for months, are the comic relief — more like the Three Amigos than the Three Wise Men — and they show up at the cave on the night of Jesus’ birth, instead of months or even years later, as many interpreters would insist. (For one thing, if they arrived on the night of the birth itself, with Herod’s soldiers only a few days behind them, it wouldn’t leave much time for Joseph and Mary to dedicate Jesus or to meet Simeon and Anna at the Temple in Jerusalem — an episode that is missing from this film.)

But it’s perfectly okay to take those kinds of liberties with a story like this, especially if it allows the filmmakers to express spiritual truths that go beyond mere historical facts. As Gaspar (Stefan Kalipha), one of the Magi, says when he sees the Christ child, the baby in Mary’s arms is “God made into flesh.” It is unlikely that a pagan astrologer would have thought in such clearly incarnational terms, so many years before any actual Christians did, but it is still kind of neat to hear him express that belief. I mean, when was the last time you heard that in a mainstream movie?

2. What does this film reveal about love? What kind of love does Joseph have for Mary? Is it romantic, or something else? What about Elizabeth’s love for Zechariah, or for Mary? What examples of fatherly love does the film show? Does Mary come to love Joseph, and if so, what sort of love does she have for him?

3. Consider how the people of Nazareth treat Mary, her parents, and Joseph after they learn that she is pregnant. When have you judged people without knowing their story? When have you stood by people who were being judged by others?

4. The film underscores the political oppression suffered by the Jews under King Herod, and it ends with Mary reciting the Magnificat in a voiceover (“He has brought down rulers from their thronesbut has lifted up the humble,” etc.). How is the birth of Jesus an answer to this oppression? Does the film make this point clear?

The Nativity Story is rated PG for some violent content (Herod’s soldiers kill the babies in Bethlehem, though most of the violence is kept out of frame and no blood is shown; Jewish rebels are pursued by soldiers and later seen crucified, though the act of crucifixion itself is kept offscreen). There are also two scenes of childbirth and one scene in which a baby boy is circumcised, and parents may need to explain to very young children why the people of Nazareth ostracize Mary and her family for her pregnancy. The film is probably too mature for preschoolers and young elementary age, but should be suitable for ages 8 or 9 and up.

— A version of this review first appeared on the Christianity Today Movies website.

December 1, 2006 The Nativity Story -- the review's up!
Recent Comments
0 | Leave a Comment
Browse Our Archives
get the latest from
FilmChat
Sign up for our newsletter
POPULAR AT PATHEOS Entertainment
1

Entertainment
Watch: The trailer for Lamentations of Judas features...
FilmChat