Variety reports that a new version of Tarzan is in the works — to be written by John Collee (Happy Feet, Master and Commander: The Far Side of the World) and directed by Guillermo del Toro (Pan’s Labyrinth), if present negotiations stay their course:

Del Toro, who grew up reading Spanish-language translations of those books, feels that the classic themes are still compelling, and that there is new ground to cover in the Tarzan mythology by turning back to the original Burroughs prose.

“I’d love to create a new version that is still a family movie, but as edgy as I can make it,” Del Toro said. “There are strong themes of survival of a defenseless child left behind in the most hostile environment.”

For what it’s worth, I have never been a Tarzan fan, per se, but I was a huge fan of Greystoke: The Legend of Tarzan, Lord of the Apes (1984) back in junior high, for reasons I get into here.

I am aware of only two other big-screen Tarzan films since then. Tarzan and the Lost City (1998) starred Casper Van Dien and was, I am told, originally intended as a sequel to Greystoke, inasmuch as the two films had one producer in common — but if Greystoke went too far in avoiding the pulpier aspects of Edgar Rice Burroughs’ books, Lost City goes too far in the other direction.

And then there is Disney’s Tarzan (1999), which is an unfortunate mess in a number of ways, but surprisingly manages to get one or two things very right. I especially love the scene where the young Tarzan — the name means “white skin” — tries to fit in with his ape brethren by covering his face in dark mud. It’s a scene that comes straight out of the book, and was also depicted in Greystoke. 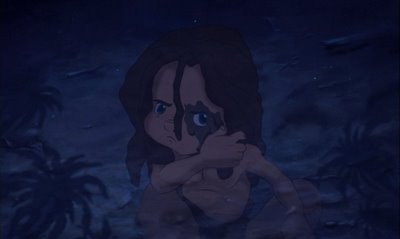 The two films also have the voice of Glenn Close in common. She dubbed all of Andie MacDowell’s dialogue in Greystoke because the filmmakers thought MacDowell, who played Jane Porter, had too thick of an accent, or something like that; and she provided the voice of Kala, Tarzan’s ape-mother, in Disney’s Tarzan.

December 14, 2006
Black Christmas gets some free publicity
Next Post

December 15, 2006 Apocalypto -- pro-Catholic, or something else?
Recent Comments
2 Comments | Leave a Comment
"I have neither noticed that much. I recenty read a leadership book inspired from Cyrus ..."
Hamid Mortazavi Cyrus the Great — a Persian ..."
""AD" stands for "Anno Domini", a Latin expression meaning "In the Year of Our Lord".So ..."
Peter T Chattaway The Chosen — season one, episode ..."
"Why does it say at the start of episode 3 that it takes place 26 ..."
Desiree Chamberlain The Chosen — season one, episode ..."
"What about Hellboy, The Grudge, Ghoulies, and Anaconda?"
45th Spiderbob Group VGCP When R-rated franchises go PG-13 …
Browse Our Archives
get the latest updates from
FilmChat
and the Patheos
Entertainment
Channel
POPULAR AT PATHEOS Entertainment
1