The Exorcist — did it need to be “pumped up”?

I’m a big fan of The Exorcist (1973; my review), but until recently I had avoided getting the film on DVD — mainly because, by the time I got my first player, there were already two different versions of the film out there, with two completely different sets of extras. I figured I might as well wait until they were packaged together.

My wish finally came true a couple months ago, when Warner put out ‘The Complete Anthology‘, including not only both versions of the original film, but both of the sequels and both of the prequels as well — none of which, incidentally, can agree on what happened to the characters before or after the first movie. (One sequel even has flashback scenes that disagree with both of the prequels!)

I started listening to the audio commentaries today, and I nearly laughed out loud when I got to the part in director William Friedkin’s commentary, on the “25th Anniversary Edition” that came out in 1998, where he explains what he avoided doing, in the sequence where Ellen Burstyn comes home to find the lights flickering and her daughter’s bedroom window open:

This area here of course has no subliminal imagery. You could have– I mean, the temptation here is to hide little demons in the darkness here. And probably, if they were making the film today, that’s what they would do, is to pump it up. But I tried to hold onto realism as long as I could.

Why did I almost laugh? Because I could vividly remember how “The Version You’ve Never Seen”, an extended version released to theatres only two years after this DVD came out, did hide little demons in the darkness! Here are the relevant shots, with the 1973 version on the left and the 2000 version on the right: 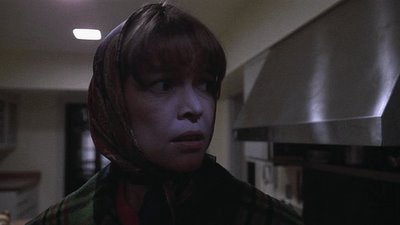 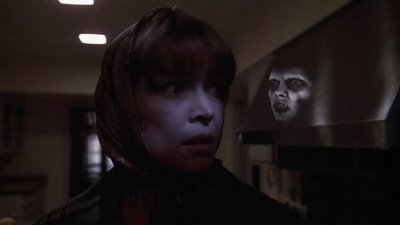 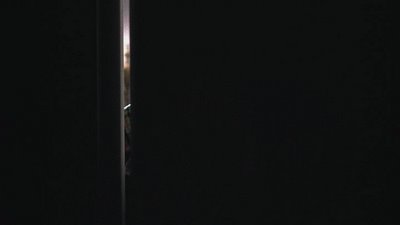 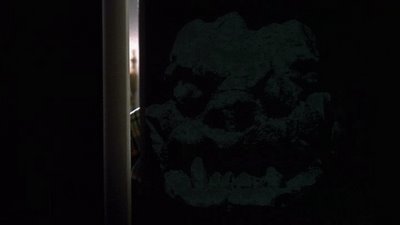 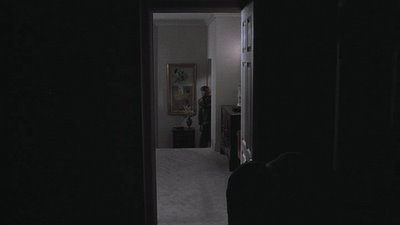 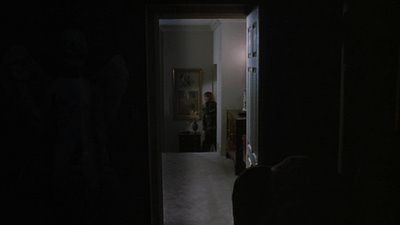 I always thought those additions were pretty unnecessary, and it’s funny to hear Friedkin say so himself — two years before he added them anyway! I wonder what made him change his mind. I haven’t listened to the full commentary on the 2000 version yet, but on this particular scene, he doesn’t address the additions at all.

It occurs to me, BTW, that my review of the 2000 version for the Vancouver Courier is no longer online. So here it is!

The Exorcist shocked, startled, and sickened audiences when it first came out in 1973, and if the cheesy sequels, rip-offs, and even spoofs that have come out since then have drained the film of its grotesque novelty, it remains a powerful, creepy moviegoing experience.

The film became famous for its gross-out effects, but what makes it work is the foreboding atmosphere, rooted in the characters, which director William Friedkin creates right from the film’s opening frames. It begins with a prologue set in Iraq, in which Father Merrin (Max von Sydow), a Catholic priest overseeing an archaeological expedition, discovers an amulet in the shape of Pazuzu’s head and ponders what it may mean. Clocks stop, dogs fight, and strange noises shriek their way onto the soundtrack.

Cut to Washington D.C., where Father Karras (Jason Miller), a Jesuit priest and a psychiatrist, is having a crisis of faith, amplified by guilt over his inability to help his dying mother. Also in Washington, Regan’s mother Chris MacNeil (Ellen Bursytn) is a successful actress who, at the start of the film, is working on a Hollywood movie about student activists. Chris has a crisis of her own to deal with, namely her separation from her husband, who won’t even phone home on their daughter’s birthday.

Broken homes, political unrest, and suffering in general — these are not just a backdrop to the more sensationalistic evil which is to come. Nor does the film’s preoccupation with demonic special effects obscure the fact that people are often cruel to each other in subtler ways, as some critics of the film have charged. Rather, William Peter Blatty, who adapted the screenplay from his novel, draws a link between the various kinds of evil in order to caution us against becoming so familiar with them that we become tempted to accept them as if they were a normal part of the world.

This is made a bit clearer in the new version of the film, which has about 11 minutes of restored footage spread out across four new scenes. In one new scene, Father Karras asks Father Merrin why the demon is attacking the young girl; Father Merrin replies that the demon wants humans to despair, to see themselves as little more than beasts. (However, some of the things the demon does to produce this effect, like the famous shot of Regan twisting her neck and a new shot of Regan “spider walking” down the stairs, are so gimmicky they nearly undermine the film’s more serious intentions.)

The best thing about this new version of The Exorcist is its digitally enhanced sound. The film is full of unnatural noises, from the grunts, wails, and backwards voices that pour out of Regan’s bulging throat to the equally inhuman sounds of the modern world (the deafening roar of subway trains and jet engines, the extremely loud machines the doctors use to examine Regan, and so on). In its own arguably perverse way, The Exorcist holds out the hope that we are more than machines, more than animals. That’s more than you can say about most scary movies these days.

December 29, 2006 LaHaye, Straczynski developing Bible movies
Recent Comments
2 Comments | Leave a Comment
""AD" stands for "Anno Domini", a Latin expression meaning "In the Year of Our Lord".So ..."
Peter T Chattaway The Chosen — season one, episode ..."
"Why does it say at the start of episode 3 that it takes place 26 ..."
Desiree Chamberlain The Chosen — season one, episode ..."
"What about Hellboy, The Grudge, Ghoulies, and Anaconda?"
45th Spiderbob Group VGCP When R-rated franchises go PG-13 …
"Not yet, but I might do something like that once Season 2 is complete."
Peter T Chattaway The Chosen — season one scripture ..."
Browse Our Archives
get the latest updates from
FilmChat
and the Patheos
Entertainment
Channel
POPULAR AT PATHEOS Entertainment
1