The funny thing is, I remember that scene.

The funny thing is, I remember that scene. December 16, 2006 Peter T. Chattaway

Anne Thompson just posted this under the headline “Most Impressive IMDB Page“; and to judge from the IMDB’s message board for this person, this was one of those things that got turned into a short-lived internet meme about eight months ago: 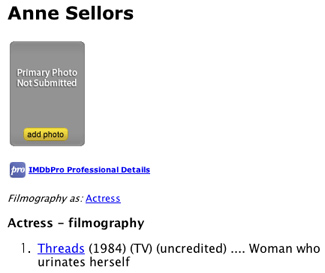 The bizarre thing is, just seeing this IMDB page reminds me of how I watched the film on TV with my sister more than 20 years ago — probably while the parents were out — and while I haven’t seen the film since, I am pretty sure I remember the scene in question.

If memory serves, a woman urinates herself when the nukes first hit England and the mushroom clouds start to rise, right?

It wasn’t every day that you saw that on television, back then.

December 16, 2006 "Daddy, what's an aphrodisiac?"
Recent Comments
1 Comment | Leave a Comment
Browse Our Archives
get the latest updates from
FilmChat
and the Patheos
Entertainment
Channel
Related posts from FilmChat