The Margate Exodus — Moses in England? 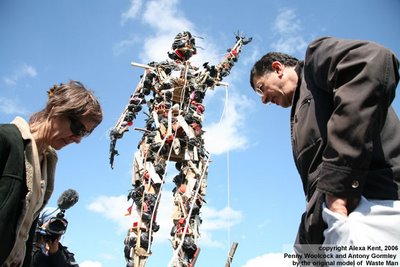 Now this sounds interesting. I was looking for info on Claire-Hope Ashitey, co-star of Shooting Dogs and Children of Men, and discovered that she is currently playing Zipporah in The Margate Exodus, which seems to be a modernized version of the Book of Exodus, not unlike, say, Amos Gitai’s Golem, the Spirit of the Exile (1992; my comments), which modernized the Book of Ruth.

According to the film’s official website, it is “a story about identity and migration”, and on the “about” page, it states:

The story of Exodus is thousands of years old and cuts across many faiths and cultures. Immigration has never been more meaningful than it is today. Exodus begins with the Egyptians complaining about the immigrant Hebrews – there are too many of them, they’re having too many children. They are ‘the undesirables’ and a problem to get rid of.

Margate is a seaside resort in Kent, on the South Coast of England. An historic place of natural beauty, and a town with a diverse population. Nearby Dover is one of the main entry points for asylum seekers and illegal immigrants, making the area a perfect place to explore issues of identity, tolerance and social equality.

The New York Times profiled the work-in-progress two months ago:

It was the idea of the British filmmaker Penny Woolcock, whose previous projects have more conventionally included a well-received movie of John Adams’s opera “The Death of Klinghoffer” and a comedy, “Mischief Night,” scheduled for release this autumn. Her work is known for its social engagement, and in a brief respite from filming she explained that the Exodus theme had been in her mind for many years.

“It haunted me as the subject for a community arts project that I could also make into a film,” she said. “Who are the Jews today? Who are the people we don’t want among us and herd into ghettos, where they wait for release?

“That we settled on Margate was accidental — the result of a misplaced phone call — but it fit the bill. The town had seen better days, morale was low, and the presence of a high percentage of asylum seekers temporarily placed in its empty hotels and guesthouses had generated a lot of social tension. People here knew the issues.”

The IMDB says the film is still being shot, but it will be released to British theatres and broadcast on Channel 4 sometime next year; you can already get Plague Songs, a CD of ten songs written for the movie, each of which is based on one of the biblical plagues.

FWIW, the only other cast member I recognize is Bernard Hill, who played King Theodon of Rohan in two of the Lord of the Rings (2001-2003) films; he plays the Pharaoh in this film.

December 16, 2006 How they did church youth-group films in 1960!
Recent Comments
0 | Leave a Comment
""AD" stands for "Anno Domini", a Latin expression meaning "In the Year of Our Lord".So ..."
Peter T Chattaway The Chosen — season one, episode ..."
"Why does it say at the start of episode 3 that it takes place 26 ..."
Desiree Chamberlain The Chosen — season one, episode ..."
"What about Hellboy, The Grudge, Ghoulies, and Anaconda?"
45th Spiderbob Group VGCP When R-rated franchises go PG-13 …
"Not yet, but I might do something like that once Season 2 is complete."
Peter T Chattaway The Chosen — season one scripture ..."
Browse Our Archives
get the latest updates from
FilmChat
and the Patheos
Entertainment
Channel
POPULAR AT PATHEOS Entertainment
1