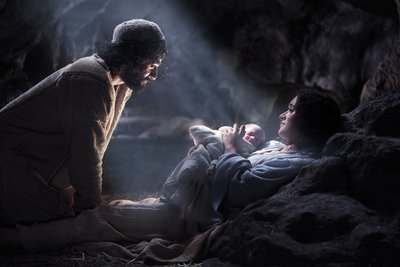 Variety reported yesterday that The Nativity Story is doing so-so business in North America, but virtually nothing overseas:

The $35 million New Line pic opened the weekend of Dec. 1 to an unimpressive $7.8 million at 3,083 playdates, finishing a distant fourth to the third frames of “Happy Feet” and “Casino Royale” and the soph sesh of “Deja Vu.” . . .

Since then, however, “Nativity” has salvaged its performance with decent holdover numbers. The second frame saw a decline of 27% to $5.7 million, followed by a drop of only 19% to $4.7 million in its third, even though the film’s screen count dropped by more than 500. In both cases, the hold was the best for a pic in the top 10.

And weekday biz has surged this week with $2.5 million in three days via gains of 36%, 41% and 52%, lifting the domestic cume to $25.6 million as of Wednesday. With Christmas on Monday, this weekend’s likely to see enough of an upward bump to propel “The Nativity Story” to about $40 million by the end of its Stateside run, particularly with viewers from group sales still waiting to see the pic.

Oversees, it’s been a different story, with foreign grosses totaling a meager $5.7 million as of Wednesday. As is typical of its financing strategy, New Line sold off the foreign territories to an array of distribs — none of whom are seeing anything but dreary results, even from heavily Catholic markets. . . .

The film’s underwhelming box-office performance is a “serious setback”, according to “Dr.” Ted Baehr at WorldNetDaily.com. Baehr, who often releases surveys asserting that films with “Christian” values outperform “anti-Christian” films, now raises the alarm and says that studios will go back to making low-cost, high-profit R-rated movies like Borat and Jackass: Number Two, now that The Nativity Story has turned out to be a flop.

Other conservatives might disagree with Baehr, though. Victor Morton, a Catholic who dubs himself the ‘Rightwing film geek‘, called the film “a rote Christmas pageant so lifeless, so lacking in dramatic juice” and said it “has all the faults of ‘Contemporary Christian Cinema (Music)’ — and without the excuses.” In other words, if this film had been a hit, and had spawned imitators, it might have been a “serious setback” in another sort of way.

Still, it will be interesting to see what lessons New Line and other studios take from this experience. Already, the Hollywood Reporter, via Reuters, reports that New Line has given up on the awards campaigns that are typical for this time of year, and is promoting its tentpole for the next holiday season — a little flick called The Golden Compass, which happens to be the first installment of a fantasy trilogy that celebrates the death of God.

Matt Page at the Bible Films Blog has some comments on this, too, and he links to a handful of scholarly interpretations of the film, including those by Mark Goodacre, Scot McKnight and Ben Witherington III; I am also aware of one by Paul V.M. Flesher. I haven’t had time to read any of these commentaries in-depth, yet, but I hope to soon — while the movie still has some currency!

December 23, 2006 "Putting the Christ back in Christmas"?
Recent Comments
8 Comments | Leave a Comment
Browse Our Archives
Related posts from FilmChat