The Passion of the Christ: Definitive Edition 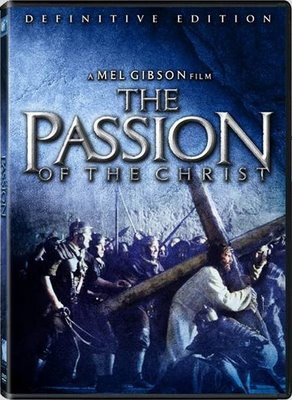 With the non-controversial The Nativity Story opening this week to low ticket sales, and with the controversial Apocalypto building up some good buzz in advance of its release next Friday, it may be a perfect time to take another look at the film that made both movies possible. I refer, of course, to The Passion of the Christ (2004), which is coming out in a two-disc “definitive edition” on January 30. The specs, as per DVD Active:

Fox/MGM Home Entertainment has announced The Passion of the Christ: Definitive Edition. The two-disc special edition will be available to own from the 30th January for around $26.98. The film itself will be presented in 1.88:1 anamorphic widescreen, along with Aramaic DTS 5.1 and Dolby Digital 5.1 Surround tracks. Extras will include Passion Re-Cut (seamlessly branched), a filmmaker commentary with Mel Gibson, Caleb Deschanel, and John Wright (original cut only), a production commentary with Stephen McEveety, Ted Rae and Keith Vanderlaan (original cut only), a theologian commentary with Mel Gibson, Father William J. Fulco, Gerry Matatics, and Father John Bartunek (original cut only), and a music audio commentary with John Debney on selected scenes. Completing the package will be deleted scenes (Pilate, Don’t Cry), production artwork, historical texts, a By His Wounds We Are Healed: Making the Passion of the Christ Documentary, a five-part The Legacy feature (Paths of the Journey, On Language, Anno Domini, Crucifixion: Punishment in the Ancient World, and Through the Ages), and the trailer.

It will be interesting to see whether this disc acknowledges any of the controversies surrounding this film, or the influence of Sr. Anne Catherine Emmerich and other Catholic mystics who, during the pre-release publicity blitz, were sometimes acknowledged by the filmmakers and sometimes not, depending on what the controversy was that day. And what’s up with the 1.88:1 aspect ratio? The original DVD had an aspect ratio of 2.35:1 — so have they cropped the sides, or expanded the top and bottom?

December 2, 2006
Well, there are worse things to do unconscious.
Next Post