A number of people, including my CT Movies editor Mark Moring, have asked whether a new Indiana Jones movie can work, given Harrison Ford’s age. But I think an even bigger question than the age of Indy is the question of when the movie will take place. 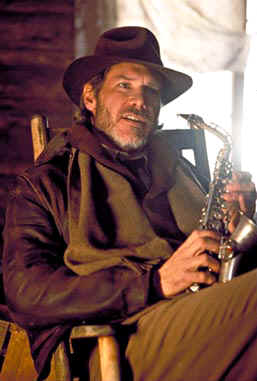 The two questions are related, of course. And how we answer them is further complicated by the fact that, in addition to the three earlier movies, Ford also played Jones in the framing narrative of an episode of The Young Indiana Jones Chronicles (1992-1994) — and in that episode, Ford and Jones were the same age, i.e. about 50.

It would also mean that Ford’s appearance on The Young Indiana Jones Chronicles took place in 1949, though the timeline linked above dates it to 1951. Either way, if Ford is 14 years older now, it would seem the new movie ought to take place in the 1960s.

Needless to say, the world was a very different place in the 1960s than it was in the 1930s; the Nazis were gone, and so was the British Empire (seen in Temple of Doom). So in what context could this new film take place? The original movies were nostalgia trips to the days of Saturday-matinee serials — but could that template work for a movie set two or three decades later? How could this new movie possibly be “of a piece” with the other films?

That, to me, is the crucial issue here, much more than Ford’s age.

Incidentally, in all the other episodes of The Young Indiana Jones Chronicles, the framing narratives basically take place “today”, i.e. 1992-1994, and concern a much older version of Indiana Jones; he was played by the late George Hall, a Toronto native who was born in 1916. And for what it’s worth, this older Indy had an eye-patch and apparently lived with his daughter and her family.

So who knows, maybe this new Indiana Jones movie will show us how Indy got that eye-patch — or how he got that daughter!

January 15, 2007 Canadian box-office stats -- January 14
Recent Comments
9 Comments | Leave a Comment
"I have neither noticed that much. I recenty read a leadership book inspired from Cyrus ..."
Hamid Mortazavi Cyrus the Great — a Persian ..."
""AD" stands for "Anno Domini", a Latin expression meaning "In the Year of Our Lord".So ..."
Peter T Chattaway The Chosen — season one, episode ..."
"Why does it say at the start of episode 3 that it takes place 26 ..."
Desiree Chamberlain The Chosen — season one, episode ..."
"What about Hellboy, The Grudge, Ghoulies, and Anaconda?"
45th Spiderbob Group VGCP When R-rated franchises go PG-13 …
Browse Our Archives
get the latest updates from
FilmChat
and the Patheos
Entertainment
Channel
POPULAR AT PATHEOS Entertainment
1