Has 300 revived the ancient-epic genre? 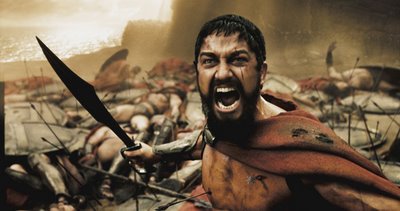 You may have heard that 300, Zack Snyder’s adaptation of Frank Miller’s graphic novel about the Battle of Thermopylae, broke a box-office record or two when it opened this weekend.

If its estimated $70 million gross holds up when the actual figures are released today, it will beat the Ice Age movies (2002-2006) for biggest March opening weekend ever, and it will be second only to The Passion of the Christ (2004; $83.8 million) among movies that opened between January and April. It also scored the third-highest opening weekend among R-rated movies, following The Passion and The Matrix Reloaded (2003; $91.8 million).

Even more interesting, this film has proved to be a big hit at a time when many people thought the ancient-epic genre had pretty much died. Ridley Scott’s Gladiator (2000), which grossed $187.7 million in total, was one of the four biggest hits of its year, and at the time many people thought it might mark a revival of the Greco-Roman movie — a hope that was buoyed, somewhat, by the surprise success of The Passion, which grossed $370.3 million in the early months of 2004. Then came Troy (2004; $133.4 million), which did okay, but not as well as some people had hoped. And then there were the outright flops King Arthur (2004; $51.9 million) and Alexander (2004; $34.3 million). Even Ridley Scott couldn’t get lightning to strike twice, when he made Kingdom of Heaven (2005; $47.4 million) — admittedly a movie with a medieval theme rather than an ancient theme, but still a big battle movie set largely in the holy city of Jerusalem. And then there was the underperformance of The Nativity Story (2006; $37.6 million), which some have accused of killing the biblical epic.

So, has 300 brought new life to the ancient epic? Maybe, maybe not. The film is certainly very different in look and feel from your typical historical epic, and its popularity could just as easily be chalked up to the fact that it’s a highly-stylized, video-game, music-video adaptation of a comic book. The fact that it is also set in ancient Greece could be perceived as neither here nor there.

But I think the odds of Universal making that movie about King David written by J. Michael Straczynski just got a bit better.

March 12, 2007 Yet another movie about the Resurrection!?
Recent Comments
7 Comments | Leave a Comment
Browse Our Archives
get the latest updates from
FilmChat
and the Patheos
Entertainment
Channel
POPULAR AT PATHEOS Entertainment
1